The most exciting recent addition to sports nutrition, not just in cycling, is periodization in microcycles or, in other words, fuelling for the work required. This means changing the carbohydrate content and caloric values from meal to meal based on what training is ahead. Let’s take a closer look at how to implement this micro-periodisation into a real training plan.

Why should you cycle carbs within one day?

We know that training with low carbohydrate availability enhances aerobic training adaptations. It helps your metabolism adapt better to burning fat as a fuel and it motivates your cells to create more mitochondria that produce energy. The problem is that if you restrict carbs for too long, you will run the risk of losing some performance when it comes to high intensity and race tempo. That’s why it is a good idea to have both “train low” and “train high” sessions built into your program. If you do it right, you will boost your aerobic metabolic capacity while not sacrificing any of your racing intensity.

There are many ways to achieve low carbohydrate availability in training. The most practical protocol is to train after an overnight fast and before breakfast. You can also get to a “train low” session with training twice a day or restricting carbs in the evening to “sleep low” and then “train low” the next morning. We discussed these strategies in more detail in the previous series here.

“Training high” strategies are the norm because they have been the mainstream way of training in the past decades. To train high, you need to do a training session with maximal carbohydrate availability. That means having your glycogen stores in muscles and liver topped off by eating carb-rich meals pre training and even taking in external carbs during a session in the form of energy drinks and gels. Training like this allows you to maintain the ability to oxidize glucose or, in other words, use sugar for energy at high intensity. It also allows you to complete hard training sessions without compromising their quality.

Periodizing these training strategies within a single day might look something like this. You wake up, eat a high-carb breakfast and do a lactate threshold interval ride as a “train high” session. After that, you have a low-carb lunch consisting of some meat with vegetables and follow it up with a “train low” session where you just spin at a low intensity for an hour or two with low carbohydrate availability. After that, you have a high-carb dinner in preparation for the intervals waiting for you the following day. This is just one example, there are many ways to mix these strategies within a training week. 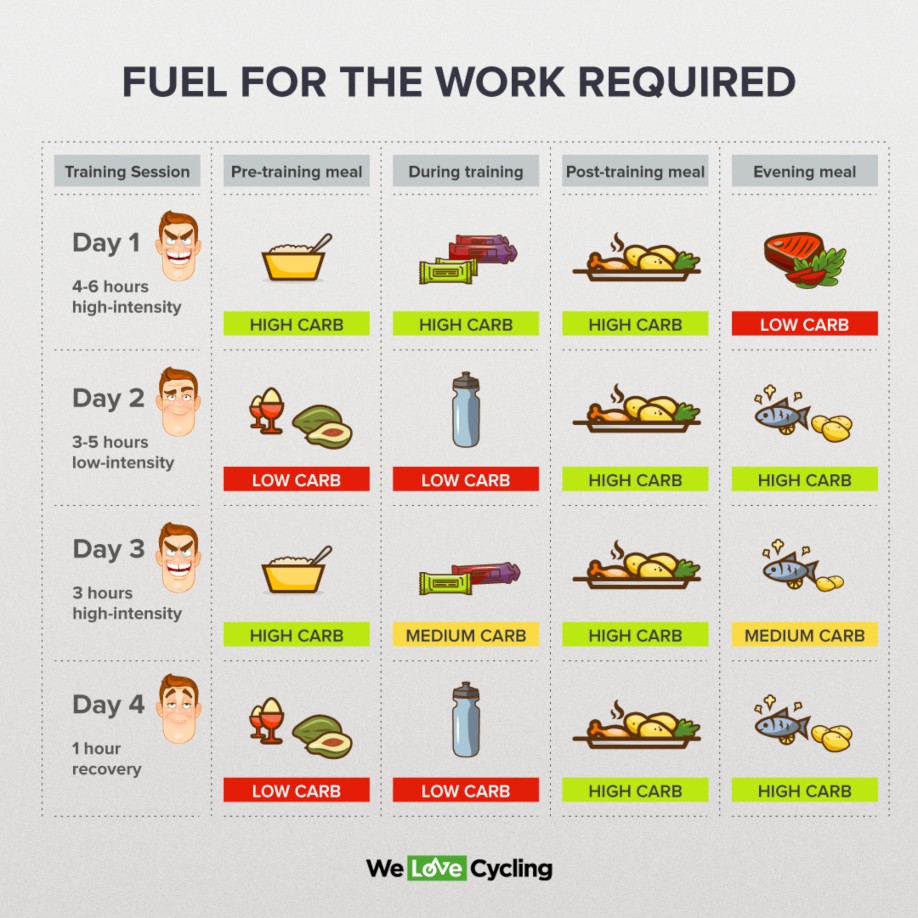 How many carbs do you need for each session?

James Morton, one of the authors of the “Fuel for the work required” study says that it’s important to keep things simple for the athletes when it comes to nutrition. He used a three-colour system. When a rider was supposed to have a low-carb meal, it would be marked red, a high-carb meal would be green, and a medium-carb meal amber. Of course, the Tour de France athletes had a lot of help understanding what these colours mean for them specifically. For example, a 65-kg elite cyclist might eat as little as 325 g of carbs on an easy day or as much as 780 g of carbs on a very hard day. But these numbers might be very different for an amateur. As a general rule, cyclists need about 5-7 g of carbs per 1 kg of body weight per day if they do 1-3 hours of easy activity. And they need 8-12 g per kg if they do 4 or more hours of moderate- to high-intensity cycling.

When should you have those carbs?

Generally, cyclists can take in around 60 g of carbs per hour on the bike. So, in case of the very hard training day where a cyclist spends 5 hours in the saddle, they could eat as much as 300 g of carbs on the bike, which would leave 480 g for the rest of the day. That would be divided between the breakfast, recovery after the ride, and dinner. If you think that eating this many carbs in one day is crazy then you’re probably right. That’s why cyclists also need to train the gut to be able to handle this much food. And that’s the topic for the next article in the series.

Next up in Periodized Nutrition in Cycling series

Cycling Trends: What Will the Year 2020 Bring?