The claim on the home page of the Schiller company’s website is quite dramatic. “Meet the S1-C,” it reads. “The Future of Mobility on the Water.” The accompanying photo shows two young women riding a kind of bike – with pedals, part of the frame and a kind of chain drive – that has been placed atop what looks like two fat surfboards. They are shown in the waters beneath San Francisco’s Golden Gate Bridge, so we know they are in California (but then again, where else would they be?).

There’s a subscription pitch that continues the claim. “A new future in urban mobility is about to begin,” it promises. “One that has no congestion, no traffic lights, and no potholes. A ‘middle mile’ of transportation on the vast expanse of waterways running through and around the world’s largest cities.”

Yes, water bikes – in this case, a marriage of the bicycle and the catamaran. This is not a version of the pedal boats one sees tourists riding on rivers during the summer, at speeds of up to 0.5 kph. No, these water bikes “are engineered to transfer the maximum amount of human energy into speed on the water” and, with a 1:7.5 gear ratio, can reach 16 kph on the water – assuming, of course, the waters are calm. The energy put into pedalling is transferred to a so-called outdrive with propeller, which moves the water bike.

One problem with this water bike is that it sells for $5,500, with replacement pontoons and a replacement outdrive costing $1,500. You also need to have a vehicle to transport it to the nearest river, and then you need to assemble it. Schiller claims the assembly takes less than 10 minutes.

Clearly, water bikes are becoming a trend, because a company called Manta5 offers its own version, the Hydrofoiler XE-1, “the world’s first Hydrofoil e-Bike that replicates the cycling experience on water. Experience the freedom of riding over lakes, rivers, and ocean. No roads, no traffic.”

The E-1 isn’t just the world’s first hydrofoil electric bike, but it’s also “the world’s first hydrofoil to boast the submerge launch capability, allowing the rider to begin cycling from a stationary position underneath the water.” It also works in moderately choppy conditions and has a top speed of about 21 kph, though it’s not stated if that is human-powered or e-motor powered. It too needs to be assembled, which the company claims takes only 2 minutes. The price? A cool $7,490.

HydroBikes offers three models of water bikes, the Explorer (pedal-powered), the Cruiser (electric-motor-powered) and the Explorer II (double-pedal-powered; in other words, a water bike built for two). “This is no slow paddle boat,” the company says about the Explorer, claiming that it reaches a cruising speed of 6.5 to 9 kph “with minimum effort.” It sells for a relatively modest $2,199.

The Cruiser is e-motor-powered and offers no pedalling, so it’s not really a bike. But the Explorer II is a tandem version of the Explorer and enables two people, sitting side by side, to cycle over water. It sells for $4,495.

So, why spend so much money for a bike that needs to be transported and assembled just to ride it on water, when you’ve already got an assembled bike and all you have to do is go out your front door to ride it? HydroBikes says that biking on water is better for you and easier than cycling on cement or hillsides.

First of all, traveling in the water is safer, the company says, because it eliminates the risk of accidents. But there’s more. 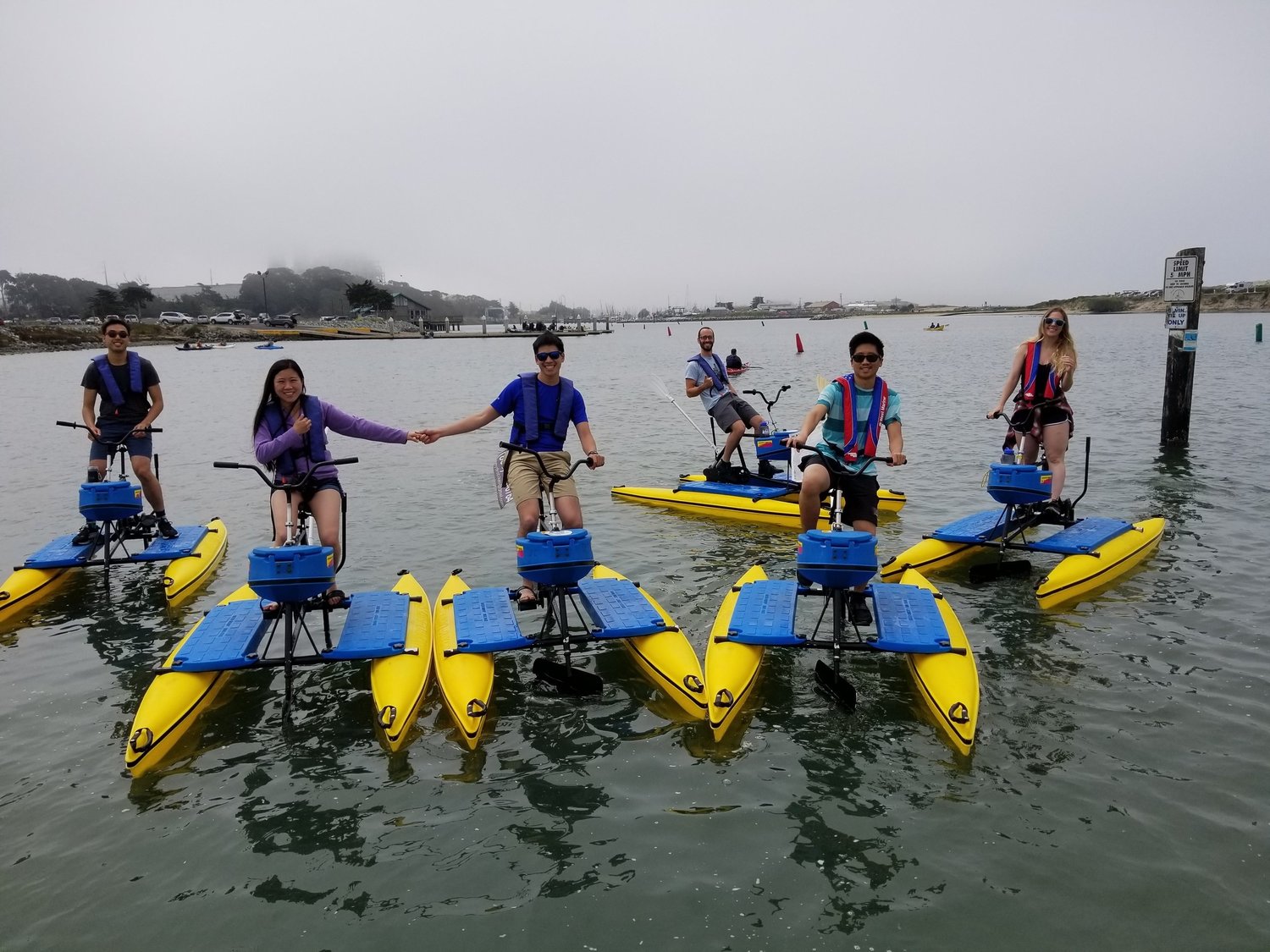 “It is common knowledge that it’s easier to ride a hydrobike than a normal bike because there is less friction in the water,” it claims – though I certainly did not know that. But, the pitch continues, “the overall fitness quotient and fat burnt with the hydrobike is a LOT MORE than what can be achieved by any normal land bike.”

So, you work less but achieve more. That sounds too good to be true. If life were only like that. But it isn’t, not yet, anyway.

There is one disadvantage to cycling on water that may not be obvious, but it needs mentioning. There are no hills in water. When you get tired of pedalling in the Thames, you stop and rest – and you get nowhere. But when you’ve climbed the Alpe d’Huez, say, or any steep hill, you get to ride down without pedalling. I don’t believe there’s a greater pleasure in riding a bike than coasting downhill, with a cool breeze drying the sweat on your brow.

The Weirdest Bikes of Them All

The Ultimate Battle of Bicycles to End Them All