The Cars of Tour de France

An event of such size and intensity such as the mother of all bicycle races, the Tour de France, needs […]

An event of such size and intensity such as the mother of all bicycle races, the Tour de France, needs steady partners to rely on. Starting with organizers, managers, teams, through to individual cyclists – all these need agile support hubs and troubleshooting solutions. And that’s where cars come in. Since ŠKODA AUTO began supporting Le Tour in 2004, their vehicles have covered literal millions of kilometres without breaking down and this year features over 320 ŠKODAs as either team, support, maintenance or organizer cars.

LottoNL-Jumbo steps up the game

Let’s start with a new addition. One of the most notable cars this year belongs to the seasoned LottoNL-Jumbo team. The Dutch crew improved their manager’s ŠKODA SUPERB SPORTLINE in appearance and exterior equipment, taking the famous Red Car of the Tour de France’s director Christian Prudhomme as an inspiration – and what a change indeed! Besides giving the car a more robust appearance, the new adjustments feature a spare bicycle parts holder, which is mounted on the rear seat with the ISOFIX anchoring system and the integrated infotainment screen gives the crew all the info about the race development and keeps them in touch with each individual rider, turning the car into a digital headquarters on four wheels. The rear-view mirror, split into two parts, is also a big help. One half is a classic mirror, while the other acts as a display for the backwards-facing camera mounted on the tailgate, designed to improve the driver’s view of cyclists behind the car. 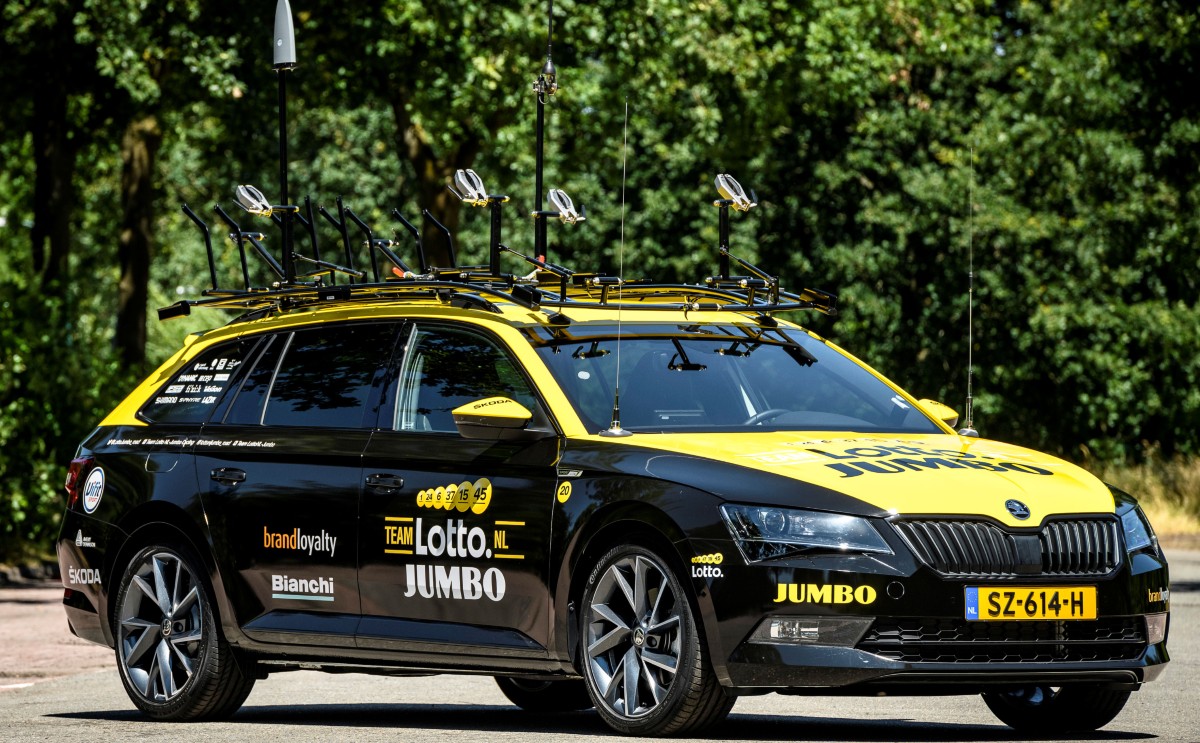 You know, what’s coming next. It would hardly be an article covering cars of Le Tour without mentioning the fabled race director’s Red Car. Not only die-hard Tour de France fans recognize the flagship ŠKODA SUPERB by its characteristic cap visor-like attachment above the windscreen and custom Le Tour and ŠKODA decals. Concerning the exterior, the car has an unusually large, one-of-a-kind custom sunroof that allows Christian Prudhomme to greet fans along the road and, most importantly, to wave a flag at “Kilometre Zero” to start each day’s stage. This honour sometimes falls on his VIP guests who accompany him in the car and are treated to a chilled champagne from a built-in fridge and special holders for champagne flutes allow them to enjoy themselves without worrying about a spilling glass in their hands. Classy indeed. 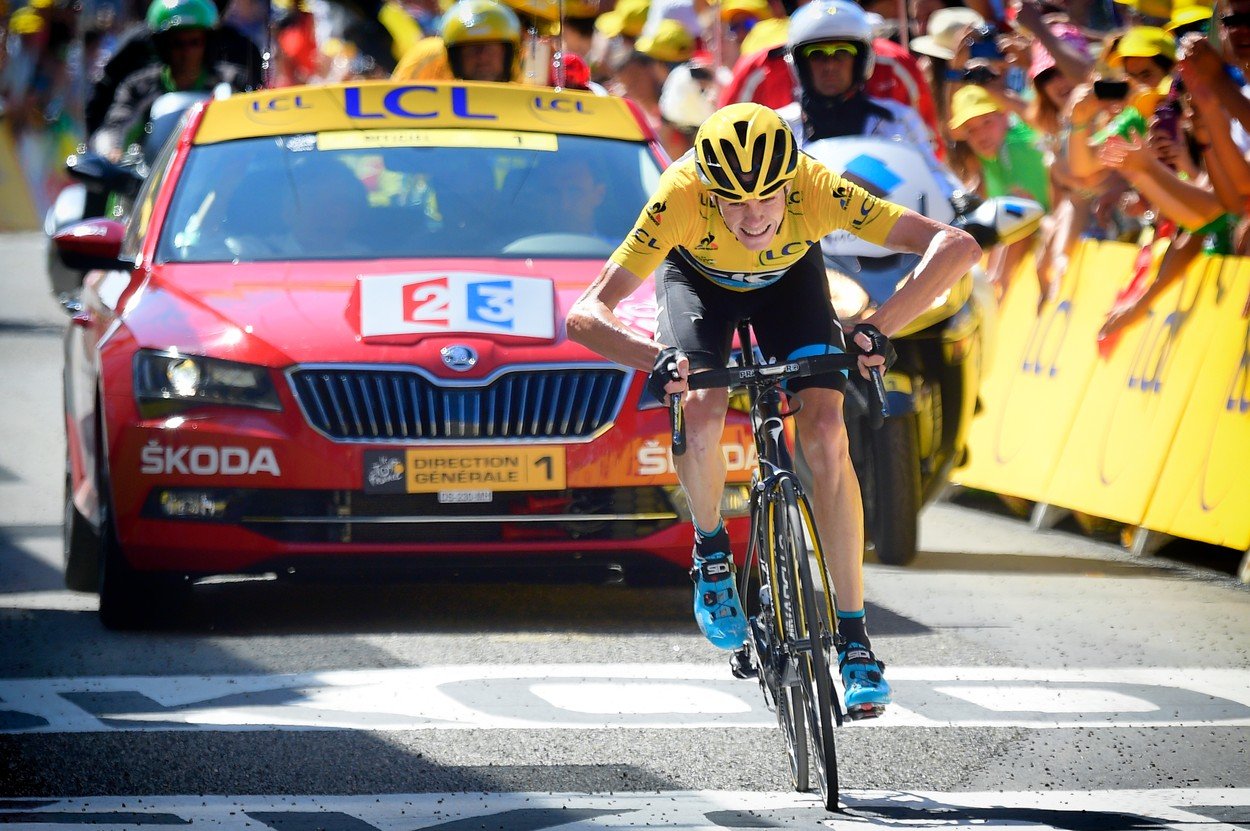 As every year, salvation on the race track wears an optimistic yellow – the fleet of Mavic’s neutral support vehicles. Usually, these cars are ŠKODA OCTAVIA and SUPERB models and are equipped with anything a troubled racer might need when their own team support cars are all engaged somewhere else. Spare tyres, chains and cranksets and even whole bicycles, food and drinks, or accessories like raincoats for when the weather gets awry. The car crew also functions as a counselling service and each vehicle is equipped with a communication hotspot for an instant flow of updates and emergency situations.

Apart from Mavic’s neutral support vehicles, there are two cars per team that follow the peloton. The order in which these cars follow the race is determined by the ranking of each team’s leading rider. Communication between cars is critical, as breakaways and crashes need to be reported so that permission can be granted for the support cars to break ranks and move up or down the race as needed.

The real treat are cars that take care of the winners of Le Tour Hospitality Programme – an exclusive contest we hold every year for all the avid fans. As you might have read earlier, five people are taken on an exclusive, all-inclusive trip to one selected Le Tour stage and the drivers who take them around in designated cars are none other than ex-professional cycling stars, keeping close the sport. This year we have ex-racing champs Tim Harris and Pedro Horrillo, to name a two. These vehicles do a short appearance, compared to others, but for the winner, they’re the most important cars of the whole Tour. 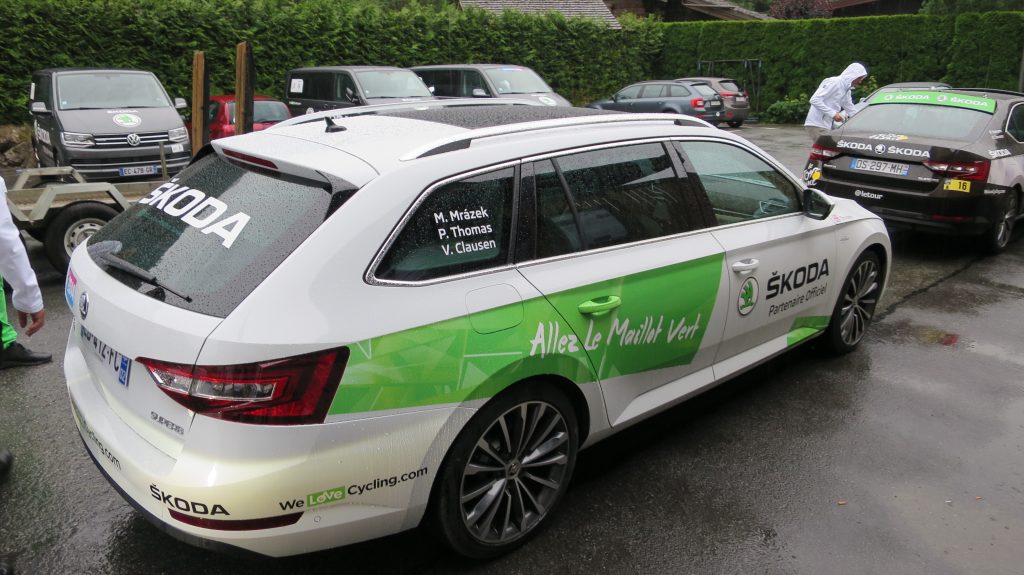