Even though most cyclists deliberately choose to stay off-bike over the winter, others are looking for unusual challenges given by […]

Even though most cyclists deliberately choose to stay off-bike over the winter, others are looking for unusual challenges given by the extreme conditions. We picked several events that might satisfy endurance lovers as well as downhill maniacs.

The event contains everything normal people try to avoid no matter the cost: arctic climate, face-biting snow, chilling temperatures, and lack of daylight time. The race of three different difficulty levels takes place in the wilderness around Rovaniemi in Finland, the official home of Santa Claus. The participants are encouraged to choose from 66, 150, and 300-km-long tracks. Besides the fat bike category, there’s also one for skis and one for walking. A GPS tracker is mandatory for registering. The conditions vary a lot depending on the weather. While the 2017 fat bike winner made it to the finish in only 10 hours and 24 minutes, the 2012 best cyclist fought against the snow for 31 hours and 34 minutes. Rovaniemi 300 stays on the list of qualifying races for the Iditarod Invitational (below). 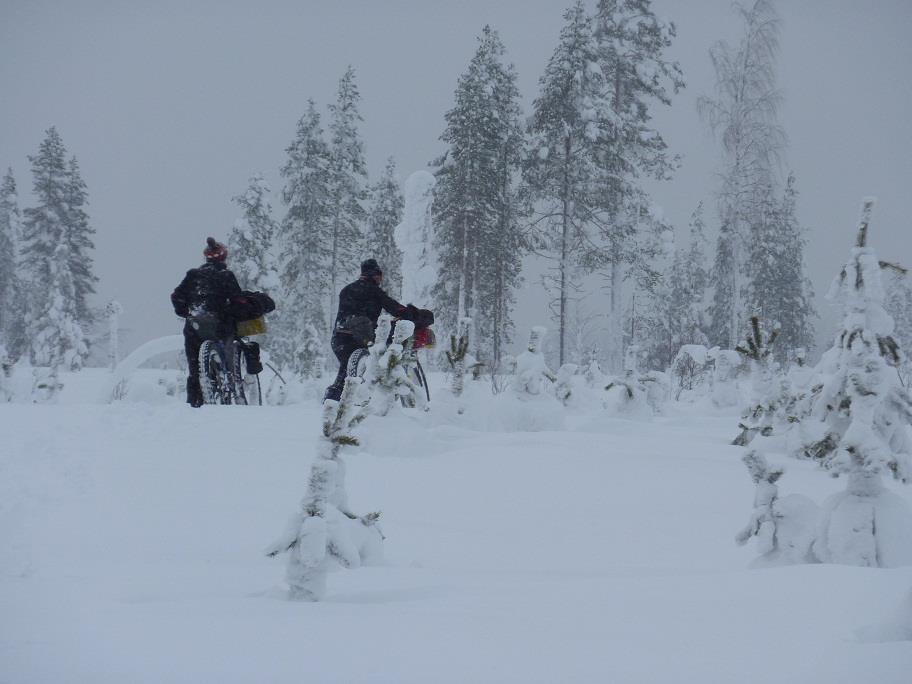 Arranged by Red Bull-supported ex-World Cup racer Michal Maroši, Chinese Downhill quickly became a gravity winter classic. Once the slopes are closed for skiers after afternoon rides, bikers get the chance to show off. The race takes place on one of the longest local slopes, starting on top and leading down to the bottom cable-car station. The event is open to the public so everyone bold enough to join the group start is encouraged to join. In the first round, 222 participants get on the track at the same time. The 100 fastest proceed to the final round. As long as the snow is not tended to, you can expect unpredictable moments. Despite a number of crashes, nobody has been seriously injured in the past. A furious afterparty follows the race.

Taking up to 30 frozen days and nights across a remarkable part of Alaska, the Iditarod Invitational race has the legendary reputation of hostile natural conditions and minimal outside support. There are two track lengths you can choose: either the 350-mile or the 1000-mile version. To be eligible to apply for the shorter one, you need to finish at least two designated qualifying endurance events, all of them having 100 miles or more. Participants are free to make their way by bike, on skis or foot, with the average speed being just over 5 km/h. For most riders, the event is not a race but rather an adventure. With minimal support, the experience drags everyone deep within themselves to survive while being peppered by extreme physical and mental challenges. Only the most experienced competitors dare to attempt the 1000-mile edition, which is regarded as the longest and toughest winter race in the world. Competitors must complete the Iditarod 350 before applying. Given the conditions on the route, only the most experienced and self-reliable riders are invited. Participants must carry all the gear, facing extremely low temperatures, rain, blizzards, mud, rain and super deep snow.

The traditional glacier race held in the Swiss ski resort Saas-Fee starts at the Mittelallain mountain range in 3,500 metres of elevation. The riders get on the steep downhill track in several rounds to face an icy surface and huge height difference drop of total 1,700 metres. The glacier village that holds the finish line will then host a great celebration party. The organisers promise to arrange an event for the most experienced mountain bikers.