In 1911, the Norwegian explorer Roald Amundsen and the Briton Robert Scott engaged in a world-famous race to the geographic South Pole. Amundsen and his four companions arrived at the pole on December 14, five weeks ahead of Scott who died along with the four other members of his team on the return journey.

More than a century later, another race to the South Pole is underway today – less dramatic, far less known and, because of all the tracking and other technology available, less perilous. Nonetheless, it is extremely challenging because Antarctica is still a savage, cold and dangerous place despite climate change and because the racing vehicle is a bicycle.

The race is less dramatic because, unlike 1911, the racers are not going head to head as Amundsen and Scott did. One racer has already completed the trip. In December 2013, British polar adventurer Maria Leijerstam became the first person ever to cycle from the edge of the Antarctic continent, the Ross Ice Shelf, to the Pole at the age of 35. Using a custom-built recumbent three-wheeled PolarCycle, manufactured by Inspired Cycle Engineering, Leijerstam covered the 638 km in 10 days, 14 hours and 56 minutes, a time that is still the world’s record for the undertaking. 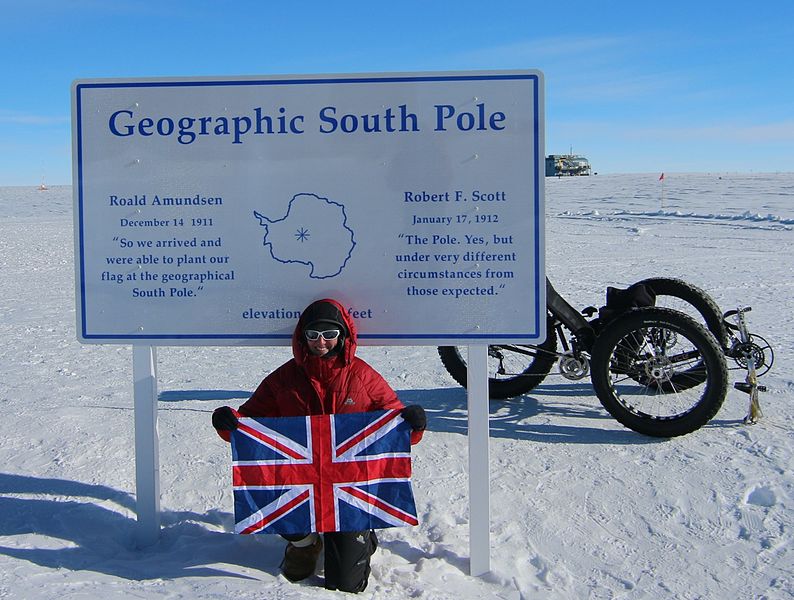 Leijerstam’s trike had three fat tires (11.4 cm) and a very low gear ratio that enabled her to climb the steepest sections of the route – the Trans-Antarctic Mountain Range – with gradients above 20 %, to an altitude of nearly 3,000 m. The bike also needed to carry all her equipment: fuel, tent, sleeping bag and communication devices, 55 kg in all.

She cycled for 10 to 17 hours a day without a day of rest and reached the Pole faster than any previous skiing expedition. The route she took was one used by fuel-delivery trucks, so the snow was beaten flat. But no vehicle had used the ‘road’ in three weeks and there had been plenty of snow drifting. She also had to combat falling snow, icy winds and temperatures of -30°C (not counting the wind chill) and lost 8.2% of her body weight – even though December is the best month for attempting to reach the South Pole on two wheels because the weather is the least inclement.

“You can train and prepare as much as you can,” Leijerstam told Cycling magazine, “but you can’t ever totally be prepared for something like this. Particularly in Antarctica, because Antarctica is a beast in itself and it will decide what it wants to do to you and you can’t stop it. It’s a beautiful but vicious place.”

She said that cycling on three wheels was essential to the success of her adventure. “On a two-wheeled bike, I can guarantee there is no way that you can cycle every meter of the way. There will be parts where you’ll need to get off and push it and to me, it wouldn’t be a proper cycling record, but a walking/skiing/cycling record.”

Two other cyclists – American Daniel Burton and Spaniard Juan Menendez Granado – reached the South Pole the same year, using two-wheelers on a different, longer route but they either skied much of the way or got off the bike to push or carry it for long distances.

Another Briton, Sir Chris Hoy, a world and Olympic champion track cyclist, has been planning to break Leijerstam’s record since 2017. Apparently, he will not heed her advice by using a three-wheel bike but has tested a two-wheeler with a ski blade at the front on Iceland. However, he has also postponed his attempt several times, apparently because he couldn’t find “somebody stupid enough to do it with me”, such as a sponsor.

Leijerstam is excited by the potential challenge to her record. “I love the fact that I have got an Olympian trying to beat my speed record,” she said. “It’s quite exciting and it will be really interesting to see what happens because he’s obviously an incredible man and an incredibly dedicated and focused, fit person. But this is a totally different game.”

And if Hoy, or someone else, manages eventually to break her record? “’Let’s see what the outcome is and whether I need to return or not,” she said. “It’s definitely not out of the question.”

Launching the ŠKODA Winter Challenge with ROUVY: All 4 Routes Revealed!

Where Does Motivation for Cycling in Winter Come From