Riding a bike in the city is not without its risks. Do you know which days and hours are the most dangerous in terms of getting hit by a car? And do you know where bicycle accidents happen most often? A law firm Rosenthal & Kreeger together with a team from 1Point21 compiled a comprehensive piece on bicycle accident statistics in the U.S. They found some surprising trends we can all learn from.

Fatal cycling accidents are going up

In 2017, there were 783 pedalcyclist fatalities (bicycles, tricycles, unicycles, and two-wheeled, nonmotorized vehicles) in the U.S., which accounts for 2.1 % of all traffic accidents. These fatalities decreased by 8 % from 852 in 2016. Unfortunately, the longer-term trend is not as positive because cycling deaths have actually increased in urban areas by 13 % since 2008. The opposite is true in rural areas where these fatalities decreased by 15 %. 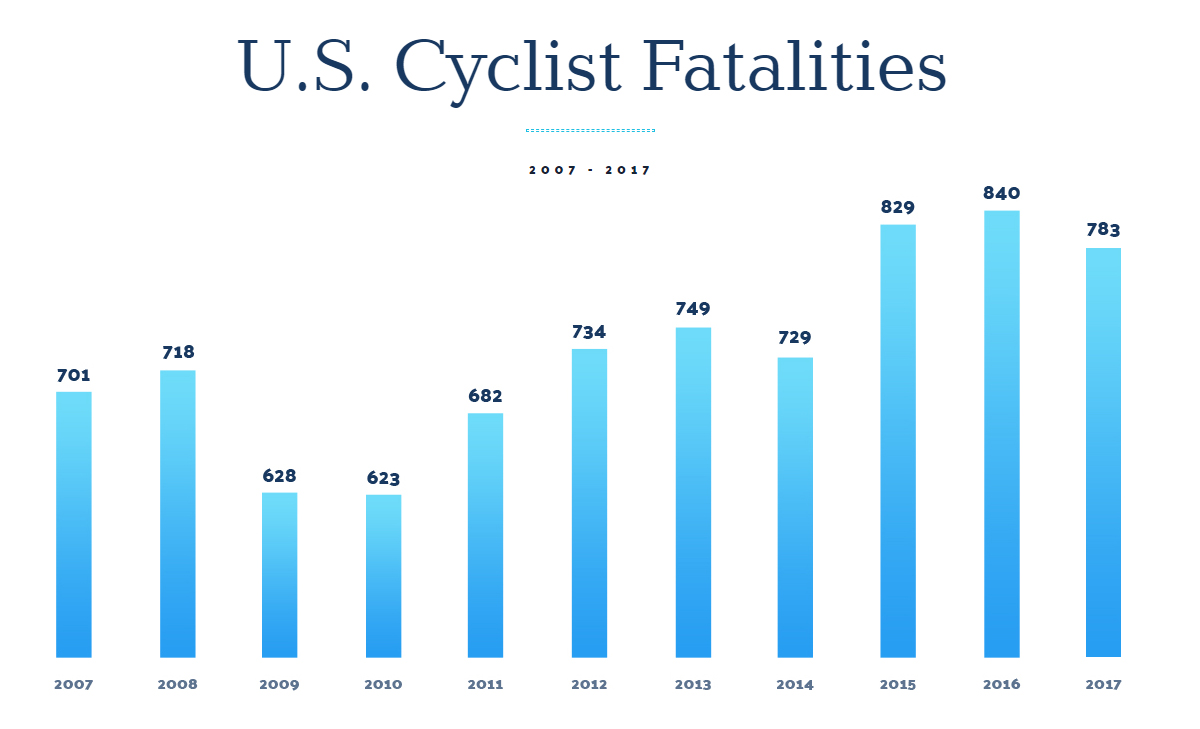 A steady decrease in fatalities can only be observed in children because most states instituted helmet laws. Still, research shows that over half of adults do not use a helmet at all. The most serious injuries in crashes for cyclists are to the head, which means the fatalities can still see a dramatic decrease when helmet use is more common in adults too.

Cycling deaths are 8 times higher in males than in females

The statistics are also showing that cycling deaths were 8 times higher in males than females. The largest percentage of male cyclists who sustain injuries is most often between the ages of 45 and 64. One of the major causes of crashes was the lack of attention. Too many cyclists are using hands-free cell phone devices and wearing headphones. It is also alarming that alcohol was involved in 37 % of crashes.

30 % of fatalities happen at intersections

The good news is that cyclists are relatively safe at least in their bike lanes where only 4 % of pedalcyclist accidents happen. Overall, the majority of fatal cycling accidents happen in urban areas and 30 % at intersections. 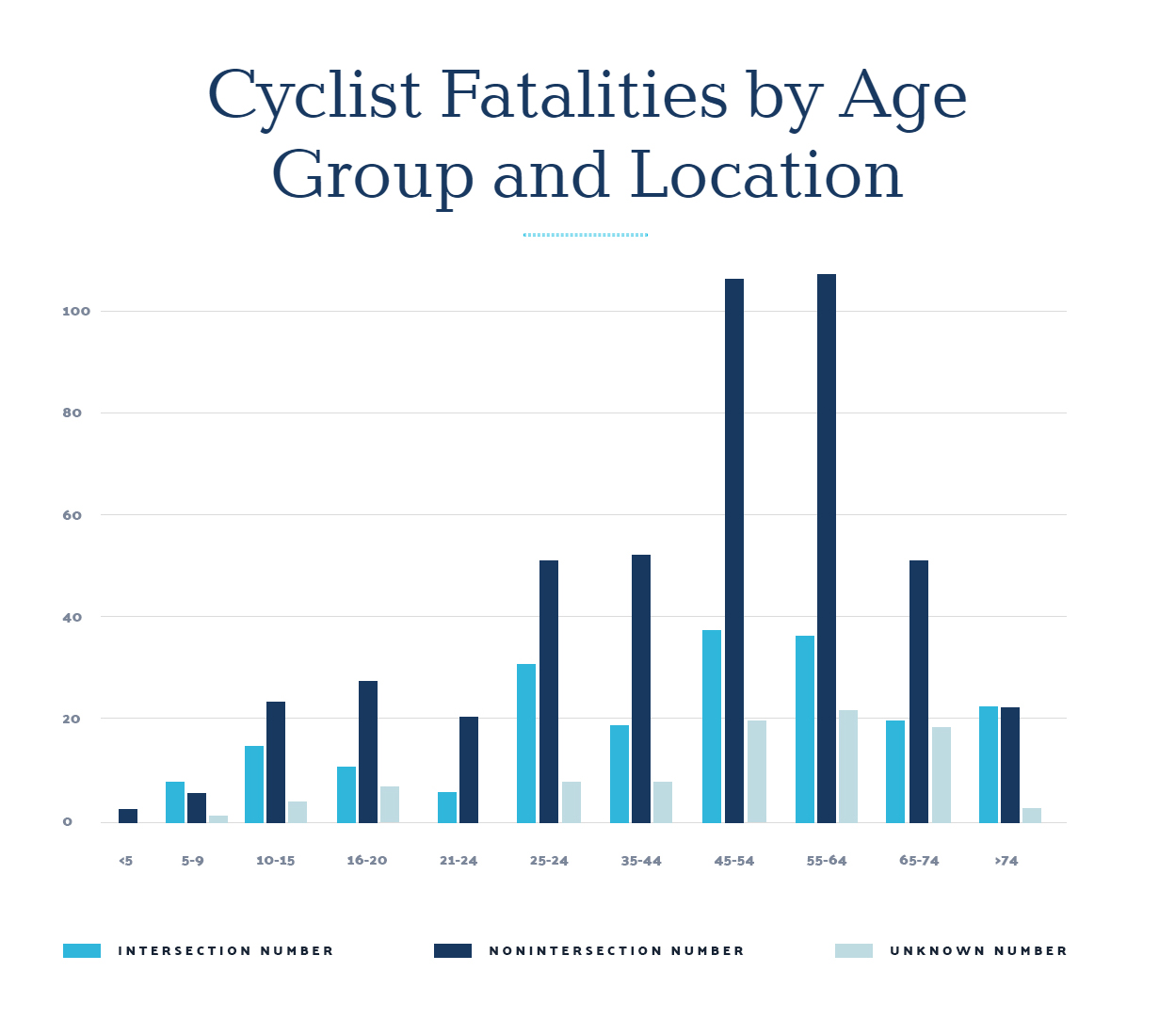 The most dangerous times to ride a bike

The time of day and day of the week influence the risk of cycling accidents. The majority of accidents take place when light conditions are low on the weekends and when traffic is high during the week. Both of these usually happen later in the afternoon. 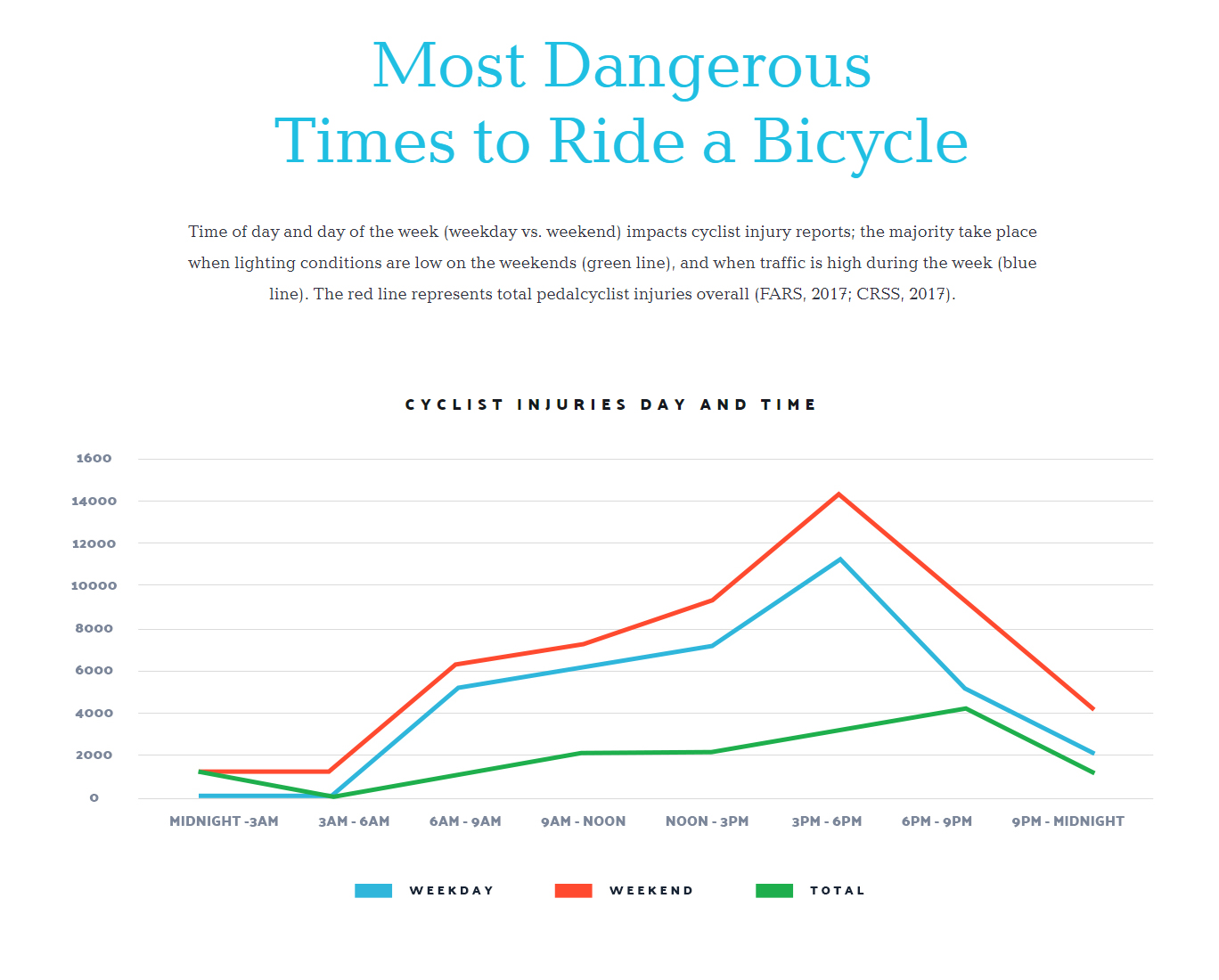 These factors are very similar when it comes to fatalities, too. The hours from 6 PM to 9 PM account for more cycling fatalities than any other times of the day. Also, 45 % of all fatalities take place in dark conditions.

Another factor that contributes to the increase of cycling fatalities is the increase in popularity of commuting via a bicycle. Unfortunately, this combined with the lack of attention due to the headphone and hands-free phone use takes its toll. According to a study conducted by U.C. San Francisco (2013), the medical costs from non-fatal bike crashes have climbed steadily by $789 million each year. They concluded that at the time of their study, both fatal and non-fatal injuries in the U.S. have amounted to $237 billion.

Stay on the safe side

If this article makes you feel like you need to do more for your safety, then check out our Stay on the Safe Side campaign. You will find videos explaining the most common mistakes urban cyclists and car drivers do and how to avoid them.