Since humans discovered the virtue of travel on two wheels, cycling has attracted women of all backgrounds, passions and interests. It has played an important role in encouraging women to step outside of traditional gender roles and to question the limits of their freedom. The bicycle is still acting as a catalyst for change and today, on International Women’s Day, we’d like to pay tribute to some of the women who have made cycling history, challenged norms, and helped pave the way to where we are today.

Who wears the pants?

In 1851, when Amelia Bloomer started wearing full-length pants that gathered at the ankles, she likely knew she was going to raise a few eyebrows, but she probably had no idea that she would go on to lend her name to the revolutionary garment she proudly sported. A women’s rights leader, Bloomer didn’t create the pants herself, but she did make them popular.

Not afraid to stir up some debate, Bloomer advocated for reforms in women’s dress, insisting that increased mobility, functionality, and comfort should be the focus of design going forward. During the mid-to-late 19th century cycling boom, many were outraged to see women on bicycles wearing pants, despite the fact that dresses and long skirts made it a lot harder to hop in the saddle. Thankfully, Bloomer wasn’t having any of it and it is largely thanks to her advocacy that the stigma associated with women in pants slowly started to dissolve.

Beryl Burton’s status as a cycling legend is well established. With dozens of championship titles and national records to her name, she has certainly earned her place among the elite of cycling history. Yet there are a few delightful stories revealing more of her personality that aren’t as widely shared. Following this past weekend’s debacle at the Omloop Het Nieuwsblad race in Belgium, where the leader of the women’s race was halted after catching the men’s race (who had been given a 10-minute head start), one of Burton’s cheekier manoeuvres seems well worth mentioning.

Known by her fellow cyclists for her humour and quick wit, what did Beryl Burton do as she rode past her fellow male racer Mike McNamara in the 12-hour time trial? Never one to be short on manners, she casually offered him a liquorice allsort. Why leave all the chivalry to the men?

After riding on rubble past bomb holes, I think she can handle a little racing

Not all roads to cycling are created equal. Although she would go on to be one of the pioneers and champions of women’s racing, Eileen Gray was introduced to the bicycle as a means of transport during World War II in Copenhagen, where she rode her bike to work as an engineer over rubble, past bomb holes and through general chaos. Despite the hazardous conditions under which she was introduced to cycling, she realised that she loved it and, following the war, she was one of the three women that made up the first ever Women’s International Cycling Team.

These women quickly set about pushing for the UCI to recognise women’s records and to allow them to race. Gray became president of the British Cycling Federation and in later years was Deputy Commandant of various British Olympic teams. Her grassroots approach to building women’s cycling is still with us today, and her sensibilities when it came to organization are what is currently shaping the future of women’s cycling.

Somebody hand this woman a wrench

Even these days, the image of a woman with a toolbox can cause a stir. And although there are plenty of women in the world of cycling and elsewhere working to change that, it is fair to say that Maria Ward was well ahead of her time. Published in 1896, her book, Bicycling for Ladies, was a comprehensive guide to cycling, covering everything from choosing a bicycle to the health benefits associated with the sport. Although the title reflects the time in which it was written, her manual is striking in that it didn’t skimp on the mechanical details either. 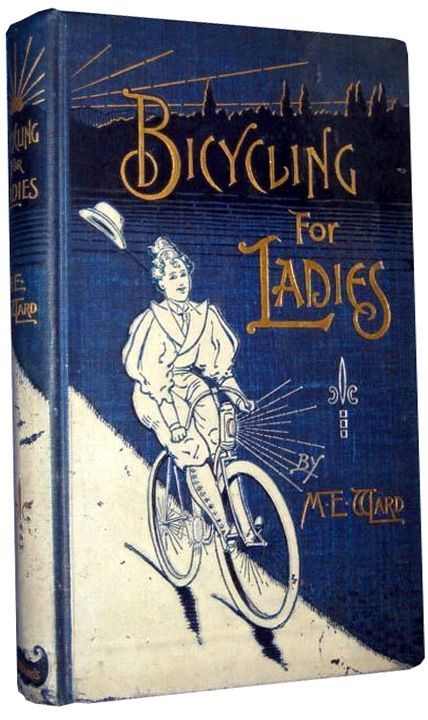 Among the book’s more progressive chapters were “Women and Tools” and “Mechanics of Bicycling.” Ward said her goal was to liberate women cyclists by teaching them the “laws of mechanics and physiology.” She explained her reasoning in the introduction to the chapter on “Women and Tools,” as such: “I hold that any woman who is able to use a needle or scissors can use other tools equally well. It is a very important matter for a bicyclist to be acquainted with all parts of the bicycle, their uses and adjustment. Many a weary hour would be spared were a little proper attention given at the right time to your machine.” Amen, sister.

Recycling While Cycling: Let’s Be Nice to Mother Earth