Shortly after visiting and riding in places like Whistler Bike Park or the trail centres in Wales, Pavel Hornik resolved to bring something similar near his own porch. It’s already been ten years since he started fulfilling his dream by building bike trails across the woods of the Rychleby Mountains in northern Silesia, just on the border between the Czech Republic and Poland.

His project “Rychlebske stezky” has attracted huge interest, as today, the area is visited by approximately 60,000 bikers per year, mostly coming from the Czech Republic, Poland, and Slovakia. More and more riders are also coming from western countries like Germany, Slovenia, Switzerland, and Austria. “Attracting the attention of people from the Alpine countries is particularly difficult because they have beautiful mountains everywhere. However, once a group of people comes here, they are usually excited and come back with some friends next year,” Pavel explains. It was him who brought tourists to the deserted mountains of Rychleby and turned the area into a tourist attraction. Even MTB celebrities have shown up, like the trial legend Hans “No Way” Rey, freerider and Red Bull Rampage participant Geoff Gulevich, and Whistler Bike Park ex-manager Tom Prochazka.

Because his work has benefited the region greatly, Pavel was elected city mayor several times, but he then realised that being engaged in two projects at once was too hard and returned to his full job in the trail centre. So what is so special about his trail centre? Let him explain this to you in 10 points.

“The original idea was to show visitors how lovely our mountains are. Our philosophy is based on the idea that we’ve been building trails for both kinds of bikers – those who prefer great riding and those who enjoy being in a wonderful landscape.”

Negotiating with the authorities

“From the outset, we didn’t have much money in the budget but we didn’t care. What turned out to be much worse was negotiating with the property owner, which was a state-owned company whose official didn’t get what I intended to do in the woods. Building bike trails? What is it good for? I never give up easily, though, so I kept visiting the company for so long that they finally issued a permit that enabled me to start with the construction. They probably thought that my resolution would fade, but soon after the first riders came, my project was officially recognised as reasonable.”

“The lack of money turned out to be an advantage because each step, as well as each coin ever spent, had to be carefully considered. That’s why the new trails were growing not only quite slowly, but also meticulously. In some bike parks, there are dozens of trails built within a short period of time, and only a few of them are genuinely popular. It’s always good to have a lot of time to think twice before you start digging and shovelling. If you make the trails perfect, bikers will appreciate every detail.” 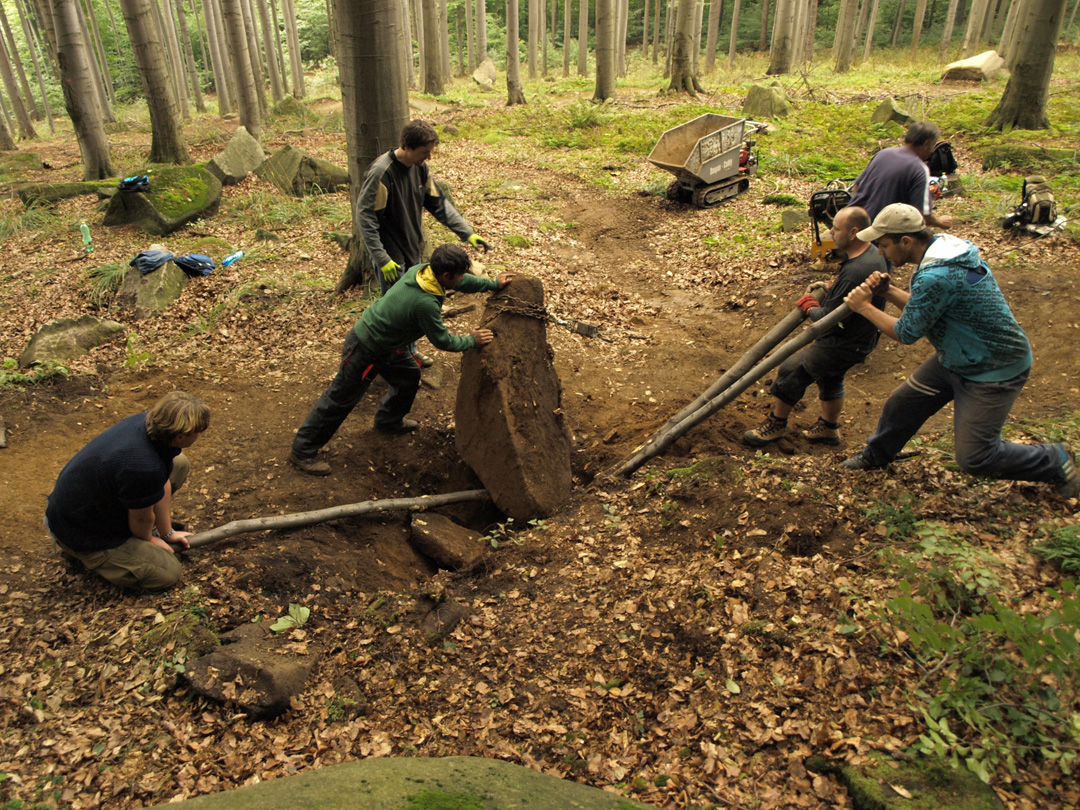 ”The revolution began in 2011, after I had met Rowan Sorrell, chief designer of the Trail Centre in Wales, UK. Rowan’s approach was completely different from that of the rest of the park builders. While in the Alps the trails were extremely steep and difficult, they were desperately boring anywhere else. Rowan introduced a new design of trails, extracting the best of both concepts. Suddenly, riding became fun just like going on a rollercoaster – you simply went up and down. This style instantly became favourite among advanced riders and beginners alike.”

“This is an enormously important issue to anyone who has ever tried to build something in the woods. As Rowan comes from Wales where it rains a lot, he brought rich experience of how to tackle flowing water that is capable of destroying any constructions that do not follow the physical laws. In the past, bikers simply found a spot in the middle of a forest and started designing obstacles taking no account of where the water runs after the rain. In Wales, they do it in reverse order – they first check the natural water channel and after that, they start designing the trail. Not respecting nature means your trail will be flooded with water long after the last rainfall has stopped.”

“There’s no room for democracy in bike trail building. Rob Trnka, an admirable photographer and a friend of mine, often says: If there are too many chefs in the kitchen, the cakes will get burnt. Building a trail where everybody follows their own vision means that the project will lose its character. Motivating your friends who came to help you is important, but there must be only one person setting the rules.”

“Designing a new trail is like composing a song. When creating individual sections, you should put one after another like a composer puts the chorus after the verses. All parts should be proportional in length and repeating, which will make the trail predictable. Last but not least, there should always be a highlight inserted because that is what people will remember after they come back home and start thinking about how great their day on the bike was. Don’t forget big stones, easy drops, funny jumps or whatever makes your trail special.”

“In the beginning, I was digging the trails with a bunch of my friends, however, this is not a way to do it for a long time. We construct new segments while maintaining the old ones for at least nine months a year. The centre requires professional care which is why there are five of us fully employed in the park now.”

“The basic rule is to build the trails the way they are safe to ride. Each line has to be obvious and predictable at first sight. Even the difficult parts may be passable without risk of injury if they’re designed in a clever way. Luckily, we haven’t experienced serious injury so far, but even minor accidents are discussed with the emergency crew in order to find out if there was something wrong on the trail responsible for the rider’s accident.” 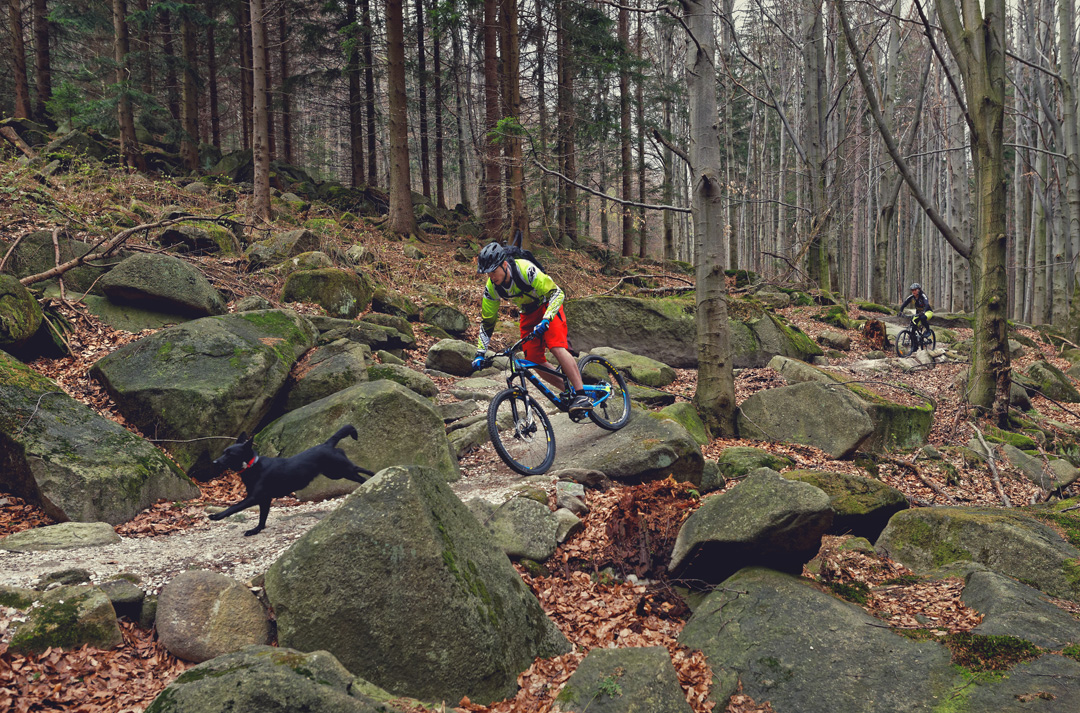 “We only use natural materials when building trails. Even the crushed stones are delivered from a mine 3 km away. We also never cut down full-grown trees. Respecting nature is the law number one. When people plan to build an undulated trail, they often bring an excavator and a truck full of dirt, but a much better approach would be to look after natural curves in the forest that look exactly the way we want them to look and aim the trail in that direction. That way we save plenty of energy, and the result is much more environmentally friendly.”

“Some projects are supported predominately by municipal resources and state grants, but we prefer independent funding directly from riders. We are currently able to cover 90% of our costs from the admission fees. That way it doesn’t concern us whether the political situation will change or not.”