This is Petr Hoffelner (42) from Prague. He’s been a professional freelance photographer for more than 25 years. While working with skateboarders, snowboarders, and mountain bikers, he acquired the nickname Hofik – an abbreviation of his surname. Every working day, Hofik puts his oldest son František (5) into the carrier of his folding bike and brings him to Prague’s Main Railway Station just to catch a train leaving for the Forest Kindergarten located out of the city.

Originally struggling with the disapproval of the state authorities, forest kindergartens are now generally accepted and their numbers in the Czech Republic are quickly growing. In such institutions, kids are encouraged to play and stay outdoor as much as possible. Their guides, as they call their teachers, train them to become independent and stay in a good mood even when the weather turns ugly. The classes are based on long forest walks and discovering beautiful Czech countryside. 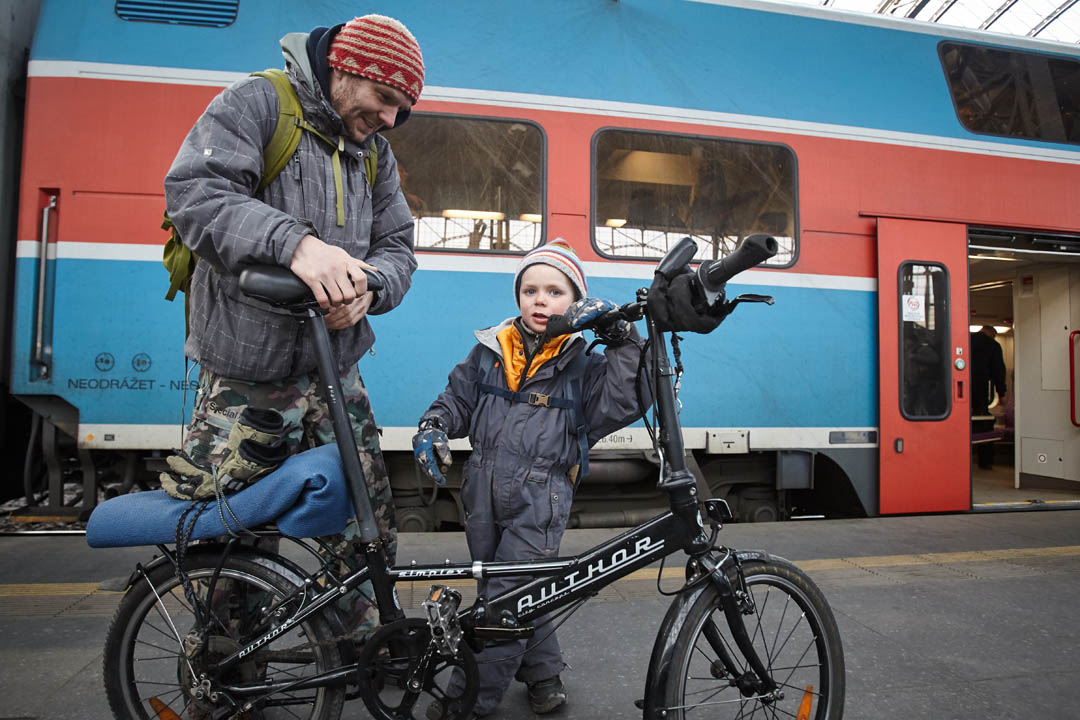 In the afternoon, the guides bring the kids back downtown and hand them over to their parents. Hofik welcomes his son and after the reunion, they cycle back home together. We met them recently to have a brief talk about how it feels to share a ride on a folding bike every single day.

You’ve had a cold ending of the winter in Prague. Have you really cycled every day?

When you cycle all year long, you get naturally used to it. We’re not avoiding any kind of weather including rain, freeze or snow. I believe that riding in whatever conditions makes us both stronger and healthier.

No worries you could end on the ground after slipping on ice?

We travel slowly. I had a serious accident on a bike many years ago resulting in a broken ankle and surgery with nine titanium screws and since then I’m really scared to crash again. I love cycling but I’ve never been a gifted rider such as these crazy guys I shoot with my camera. I only regard the bike as a mean of transport. 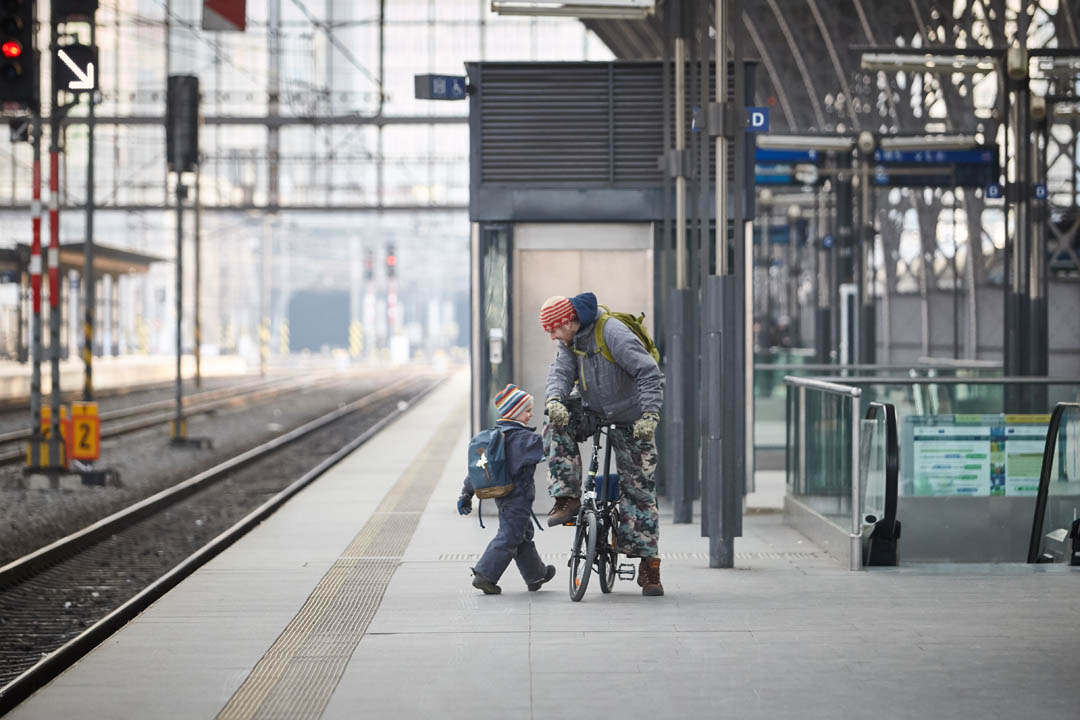 What bike do you use?

It’s an old folding bike manufactured by the Czech bicycle company Author. It’s called Simplex and, actually, it’s a kind of simple bike with a price tag around 500 euros.

What are its strong sides?

I’m really glad the bike has three gears so it makes climbs in hilly Prague possible even with my son in the carrier. When folded up, I can take it with me on the train without any additional charges. I can also take it inside for a meeting or an indoor photoshoot, and this way I can prevent it from being stolen from the street. I can literally keep the bike with me wherever I go.

Is there something that makes you angry about it?

Once the handlebars got folded during the ride on the cobblestones. It was an unpleasant surprise. I regarded this action as a treason but we’ve stayed together. 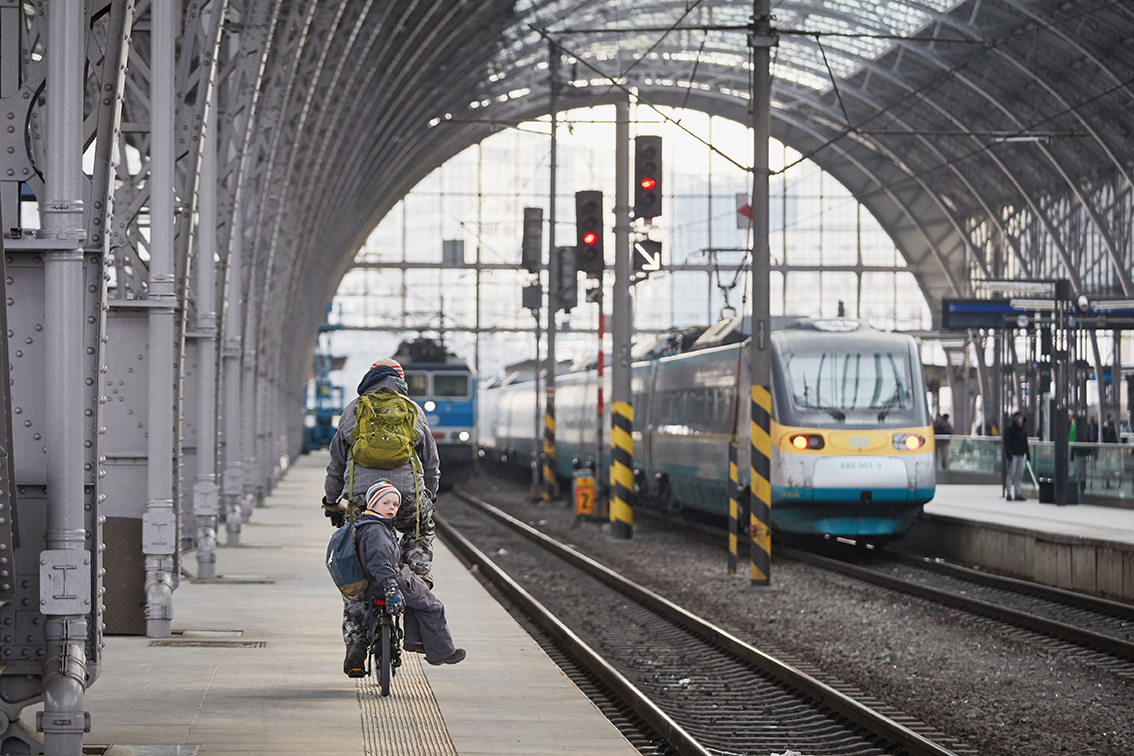 How much do you ride?

I was thinking about it just recently. If I add up all rides together, it would make 30 km per day on average which makes about 300 km monthly. Apart from delivering my son to the railway station and then back home, I have also countless meeting and errands. I can’t call it fitness but it’s the way to exercise a bit every day.

Why do you ride a bike?

Some people say that cycling in Prague is not comfortable because of the hilly terrain, narrow streets, busy traffic, and angry drivers but for me it’s still the best option I have. This way I can avoid getting stuck in a traffic jam and I don’t lose time trying to find free parking lots. I also prefer to discover new terrains and routes. Normally, I never take the same route twice, so I’m getting a much more complex picture of the city. I’m fond of the lifestyle in Asia where women haul two kids and cupboard on a scooter without someone wondering. Kids have a natural instinct to hold onto you and get to the destination unharmed. That’s exactly, what we’re doing every day with Frantisek who’s waking up and asking me if we can cycle again.