If you like to have a beer after your ride, a good wine with your steak, or shots on the weekend, you might want to know check these out!

It’s not true that the bigger you are, the better you tolerate alcohol. It’s actually about muscle mass. Water-rich muscle tissues absorb alcohol effectively preventing it some of it from reaching the brain. Interestingly, the colour of your eyes matters too. People with blue eyes have a higher alcohol tolerance than brown eyed people. The hormone responsible for producing melanin, the pigment that colours your eyes and skin, also plays a role in how your body deals with alcohol. 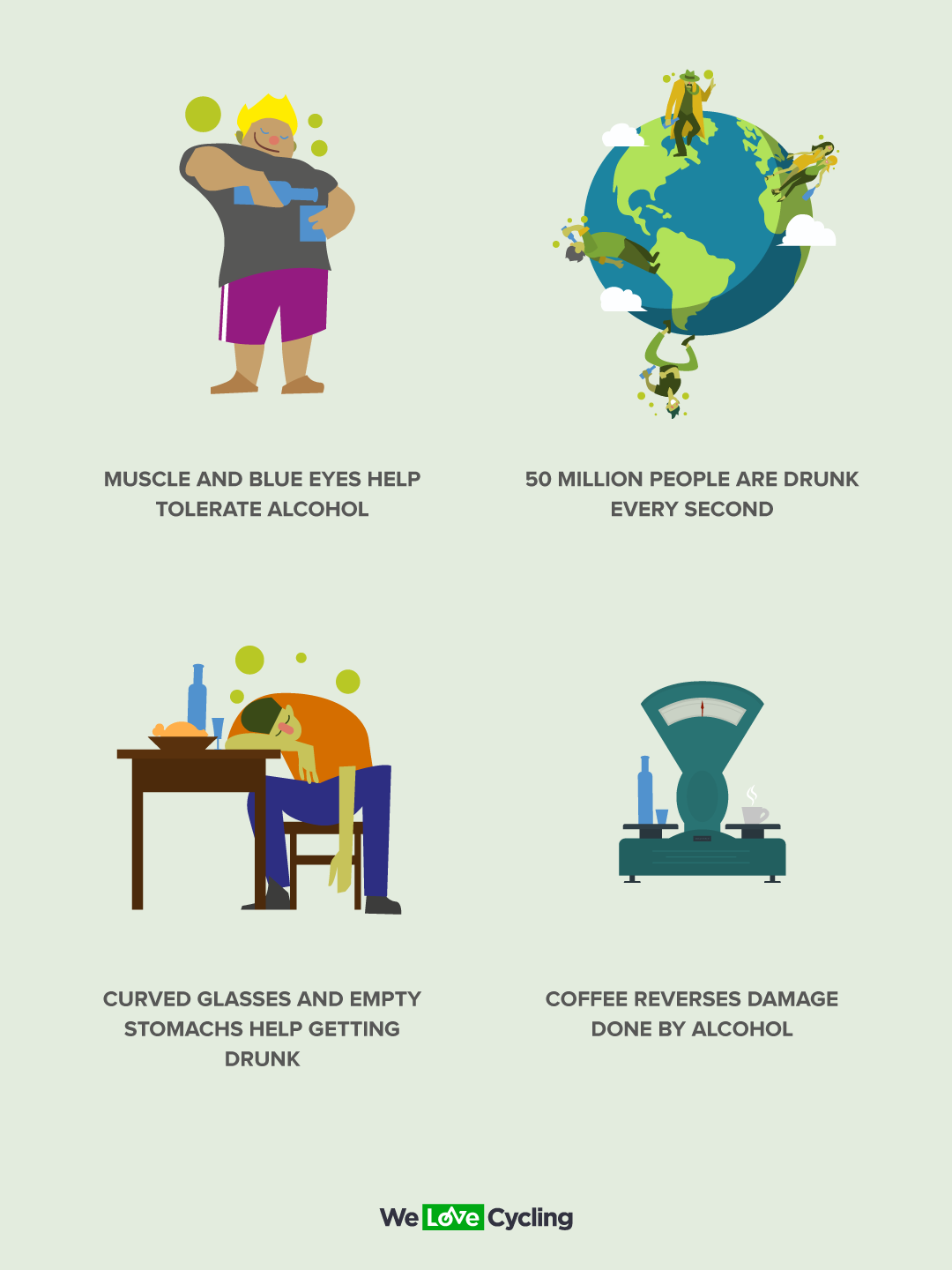 Research suggests that at any given moment 0.7 % of the world’s population is drunk. It means that if you’re drinking right now, there are at least 50 million people around the world doing the same thing. Countries like Czech Republic are probably keeping the average up being the most beer-drinking country in the world. They have an incredible beer consumption of 142.4 litres per person, leaving the Irish, Germans, Americans and other “beer nations” far behind.

Doctors in Japan have observed patients with what’s now called the “auto-brewery syndrome”. It is found in people with overgrowth of candida yeast in the intestine. Candida is a microbe that excretes alcohol as a metabolic by-product. In severe cases, the overgrowth can cause drunkenness.

Research shows that people drink more slowly when alcohol is served in straight-sided glasses than when it comes in glasses with curved sides. Also, the peak blood alcohol concentration level can be 3x higher in people who drink on an empty stomach than in those who eat a meal before.

If you give up alcohol for a month you can improve liver function, decrease blood pressure, and reduce the risk of diabetes. Coffee has also been found to reverse liver damage that is caused by excessive alcohol consumption.
We have a long history with alcohol

The “drunken monkey hypothesis” by Dr. Robert Dudley suggests that we like alcohol because of our genes. Our ancestors heavily depended on fruit as a food source which resulted in a genetic attraction to ripe and overripe fruit that contains ethanol. That might explain why it’s estimated that fermented beverages were made as early as 100,000 years ago. Maybe also why, until 1916 whiskey and brandy were listed as scientifically approved medicines in the United States. And possibly even why beer was not considered an alcoholic beverage in Russia until 2013.