Welcome to the world of ultra-endurance cycling. Some consider it to be almost an alternative universe, consisting of top athletes, hard-core races, and major cycling feats involving record-breaking attempts and successes. Only a few women and men can claim to be a part of this adrenaline-fuelled, stubborn gang of pain lovers and only the very toughest and most persistent will rise to the top. Such as the Austrian-born Christoph Strasser. His most impressive (and a bit insane) feat to date is being the fastest cyclist to finish RAAM, or Race Across America, which is an annual solo ultra-distance event spanning approximately 4,800 km and crossing 12 states. Think of getting on your bike in California and stop somewhere close to New York City. Oh, and he won it four times already.

And if this was not enough, between 14th and 15th October 2017, he broke the World Track Record for an indoor 24-hour race challenge on a velodrome in Switzerland doing a total of 941,873 km, sans sleep, of course. You just want to know what’s in this man’s head. So we sat down with him.

Christoph, let’s talk about how you started cycling as a young man. In 2005, at the age of 22, you were the youngest person to enter and complete the ‘Race Across the Alps’. Furthermore, you became the youngest Ultra World Champion at the age of 25. Why endurance cycling over the more “traditional” cycling disciplines?

Well, what you must understand is that I was never a part of the traditional cycling events where most Juniors start. When I was a kid, I did not really like cycling to be honest. I was doing all kinds of sports like football and tennis and it was all just for fun. Then I saw a video about Race Across America (RAAM) and I thought “Oh my God this is so cool!” In fact, my very first race was a 24-hour event in my hometown in Austria at the age of 20.

At the beginning, this was more of being in search of adventures and to ride my bike in different countries you see?

My friends and I initially wanted to ride that 24h-race as a 4-person team but things did not work out. So I decided to enter the race by myself as a solo participant. I entered for fun but what I found there was a true passion for the sport of ultra-cycling. So after participating three times, I gradually improved and decided to train more and more in a professional way.

Many of us amateur cyclists are basically able to ride a 1-day event nonstop. But what’s the secret to going 7+ days in a row? Is the RAAM Challenge mainly a physical or a mental one?

After talking to many people who have done the RAAM, each person has a very different experiences of it. I am very much of a team player and I think that it is important to have a good support group in the sense that the people in my crew must be funny, they must talk to me, and just give me a good time along the way. So for me, RAAM is 1/3 the body, 1/3 the mind, and 1/3 my support team. RAAM can be divided into parts:

For the first 1 or 2 days, your mind is not really challenged because you feel strong. You ride at a good pace. So it is somewhat more of a physical challenge because you want to keep a good pace in the Californian mountains going up and then while you cross the Arizona desert. The next 3 days are where you start getting sleep-deprived, and you will start having problems. So your mental state gets slowly affected. The last two days are a pure mental challenge because you become confused. You start getting freaked by little things along the road. You don’t understand what is happening, you don’t recognize yourself anymore. You even forget that this is a race and you start believing that you are riding your bike without any goal. This is where your team, which is following you in the car non-stop, becomes most important.

Many people just do not understand the importance of the support staff. Because when I am alone, I am tired and slow. During these times, only the team is able to keep me focused by communicating with me via radio as much as possible.

In this sense, the 24-hour challenge in Switzerland was much more difficult mentally because it was so boring and monotonous. I just did not have the team to provide me with support needed for such a challenge.

You just mentioned that the World Track Record challenge was harder because you did not have the support team. Didn’t you have a team radio for communication?

Yes of course we did! But it was not working so well because you see, inside the Velodrome a few hundred people had their mobile phones on so there were massive interferences. As a result, we could talk a little for short moments where I could tell them what I needed but no real motivational talks there.

How was this challenge different from the RAAM preparation-wise?

From a fitness training aspect, it was very similar to my usual training because, in my world of ultra-cycling, you have two races per year, maybe three. It is not like in pro-cycling where you have multiple races each month during the season. I do about 30,000 km of training per year, and then I add the 4,800 km of RAAM. In my world, you are training for half a year before Race Across America. I had 3 months to prepare for the Track Challenge in Switzerland. I did a lot of gymnastics and upper body training because I knew that riding the velodrome would be hard on my back and arms because of the position. I also needed to practice on the velodrome, which was not easy for me because the closest velodrome from my home is in Vienna and that’s a 2-hour drive

BikingMan: Ultra-Distance Cycling with a Taste for Charity

What people must understand is that riding in a velodrome is a very strange experience for a road cyclist. It is all about these steep curves which you cannot take too far to the left or to the right, otherwise you will slow down and ultimately crash. You must constantly focus on the black line to make sure that you are within the limits required.In RAAM, you get to get into the flow, you can even listen to good music. You have great landscapes to look at. On the velodrome, I simply could not un-focus because I risked crashing every 3.5 seconds.

Let me give you a small example which illustrates this perfectly. After I broke the record, I did one final lap of victory where I was enjoying myself, raising one hand and celebrating and in that final lap I had a crash! Nothing serious but it does show how focused I needed to be for the whole 24 hours.

We are curious about your plans for 2018. Are you willing to share them with us?

Of course! I can tell you that I will be in next year’s RAAM for sure. I am dreaming of getting another victory there because right now, I have 4 wins to date and the most successful solo RAAM rider is Jure Robic from Slovenia who won 5 times. So I would really like to level his record. Then in autumn next year, there is the 24-hour World Championships in California which is my second goal for 2018. I did it last year and won. I will lose the title this year since I will not be there but I would like to get it back next year.

The format is an Individual Time Trial (ITT) on a 30km loop. Last year I did 886km in 24 hours. It is a very interesting event because you must take your night lights and warm clothing with you. Most similar events here in Europe allow for drafting behind a rider but not in California. So it’s a lot harder.

Do you think that ultra-endurance cycling would benefit from being managed with more UCI-like rules, or do you think that the looser UMCA (Ultra-Marathon Cycling Association) approach with a lot of “unwritten” rules is better for your sport?

This is a good one! I think that the rules of ultra-cycling are good as they are since they are much more related to safety and traffic during the event because, in events such as RAAM, we race on open roads, which means that the roads are not closed to the traffic. So a lot of the rules is about safety on the roads for us but also about your support staff.

As for the UCI, the rules are much more about limitations of the bike such as weight, dimensions, etc. In their time trials, it is even worse. To be honestly, I don’t know what it is for because this is not my world, and this is a little bit of non-sense to me. In the world of ultra-cycling, the choice of your bike is very free. In fact, because our sport involves pushing yourself to certain limits, I believe that freedom of things such as your saddle position, which is strictly regulated in UCI events, would be too restrictive in ultra-cycling.

What the UMCA is very strict about is night-time riding where your follow car must be behind you during the night at all times. So for example, if the car runs out of fuel at night and they need to stop at a gas station then the rider must stop too (not required during the day). So it is all about team planning and coordination during the day.

Let us give you a very last round of flash questions! We took the liberty to call them “Strasser’s Quickies”.

#1: Personal bike (non-competition – the bike you will ride at home), your frame choice will be: Steel, Carbon, Titanium, or Bamboo?

In reality, I use a rusty steel bike to ride to the Café or the supermarket. But I would love to have a Bamboo bike!

#2: You are invited to participate in: Paris-Roubaix, Milan-Sanremo or the Kona IRONMAN triathlon. Your choice?

I’ll take the flattest one! Definitely Paris-Roubaix. I can ride fast on flat roads and I also ride a Specialized Roubaix bike often so I am used to them. And you must know that Fabian Cancellara is my favorite pro! 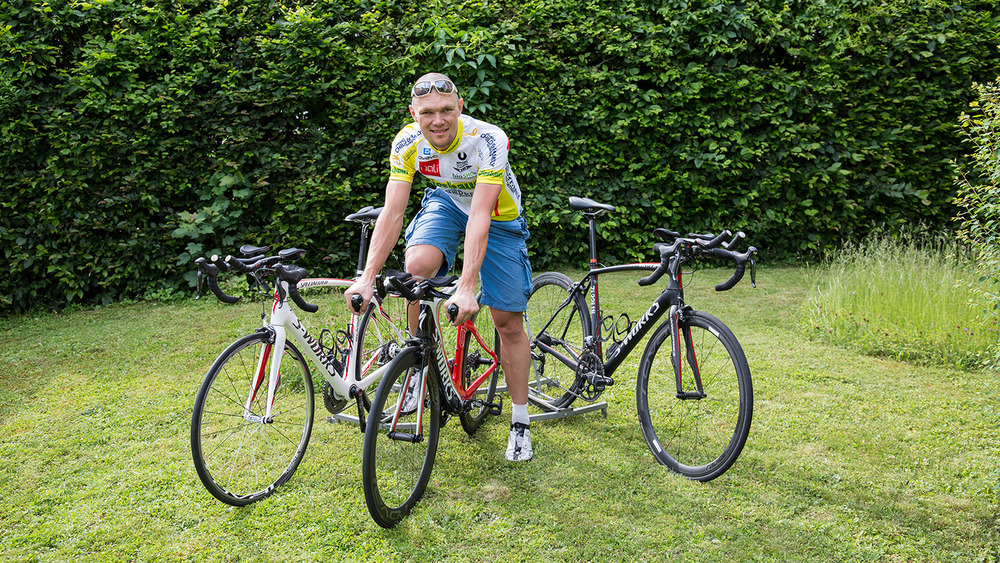 #3: Dinner on a weekly night: steak, chicken or lobster?

Everything! Lobster first, steak afterwards, and chicken as dessert! Understand that in my world, food is important!

If Gin Tonic is not an option, I chose beer.

I would love to train with junior cyclists before having a healthy lunch! Sports and healthy food reduce the risk of cancer very much.

Back to Basics – A Picnic of Bread and Pasta

Top Tips to Beat a Headwind