Meet Jan Cvachovec from Prague who got addicted to road cycling and then discovered l’Eroica – an original race of historical bikes which is annually held in Italy. After visiting it for the first time, there was no help for him than do it one more time. Are you thinking about taking part in the 2018 event? Jan explains why you shouldn’t miss it.

“I got familiar with road cycling some five years ago. It was a whole new feeling because the bike was shaky and super fast. Until then, I only had experiences with mountain biking, however, I would never call it my passion. Instantly after my initial ride, I bought my own bike and I started cycling. From July till the end of the year I completed more than 3,000 kilometres.

“After a couple of months, I realized that a lot of friends from snowboarding and MTB freeriding had been having a hidden passion and it was road cycling. My guru Tomáš Vorlík taught me that the best road cycling was happening in Italy and so I decided to learn more about its cycling scene, including the history of the famous Giro d’Italia. 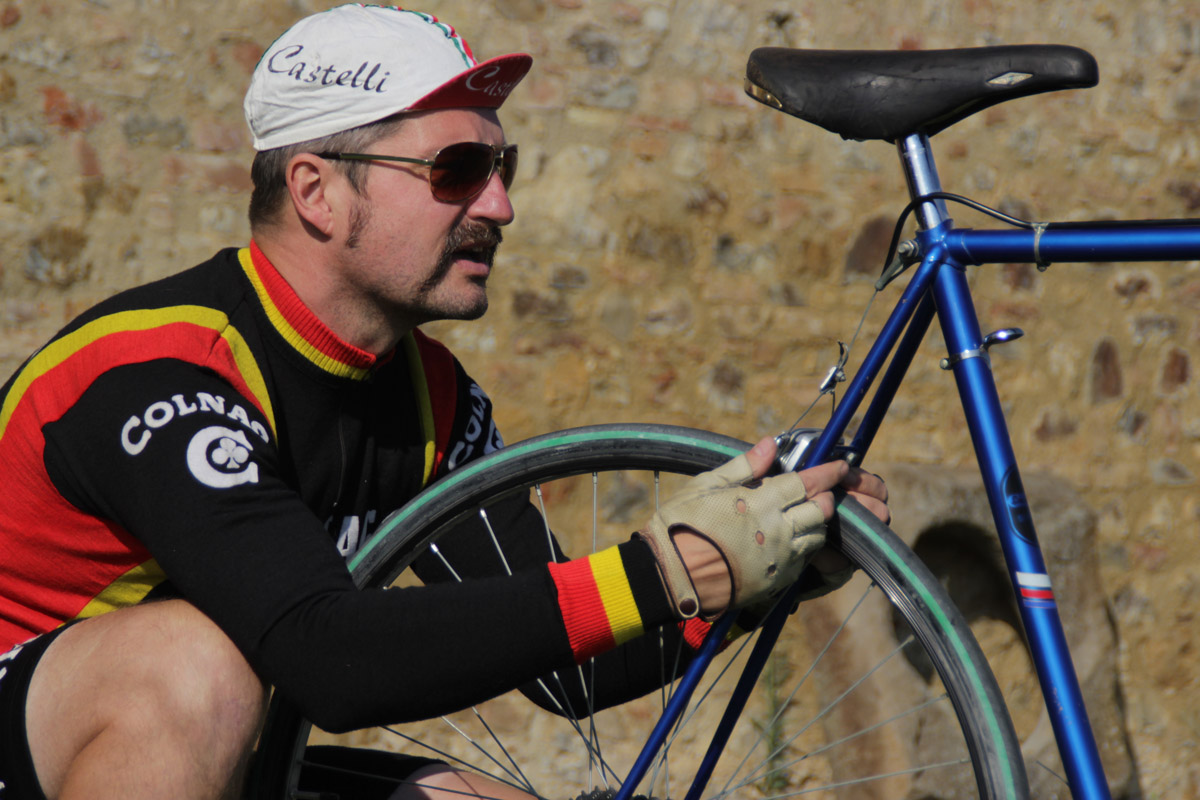 “My first Italian road bike was Pinarello with a steel frame, which I found just a little bit slower than the carbon-fibre bikes but it made for riding with more comfort and style.

“Part of the story was the fact that the old-school style bike didn’t match with plastic helmets and lycra shorts. I started searching through eBay and other websites in order to buy some suitable gear and this way I learned about l’Eroica for the first time. I was amazed by people that invested their energy into keeping traditions and historical bikes alive. In the end, I was persuaded by my friend Zoran Bartek to register and take part in the race. 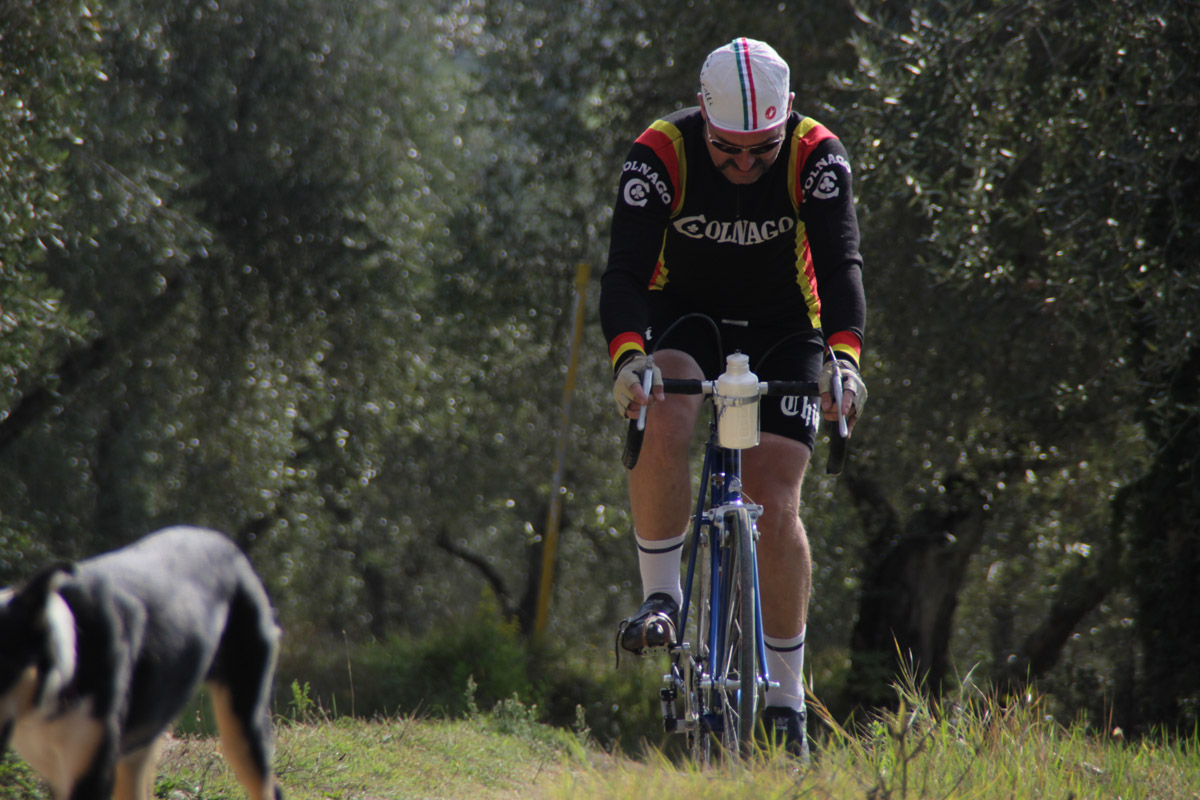 “The original l’Eroica race takes place on the first weekend of October in Gaiole, Tuscany, in a region called Chianti. The basic rule is that participants must only use bicycles produced before 1989 with Bowden cables led over the handlebars, shifter levers mounted on the down tube, and pedals with toe clips and toe straps instead of modern click-on pedals.

“Eight months in advance, the registration process starts in February and, because of the massive interest, the capacity is sold out soon after the announcement. The first 3,000 early birds can sign up for a discounted price of 75 EUR but even if you can’t catch with the deadline, there’s still a chance to buy a slightly more expensive starting fee for 100 EUR from which a part is donated to charity. 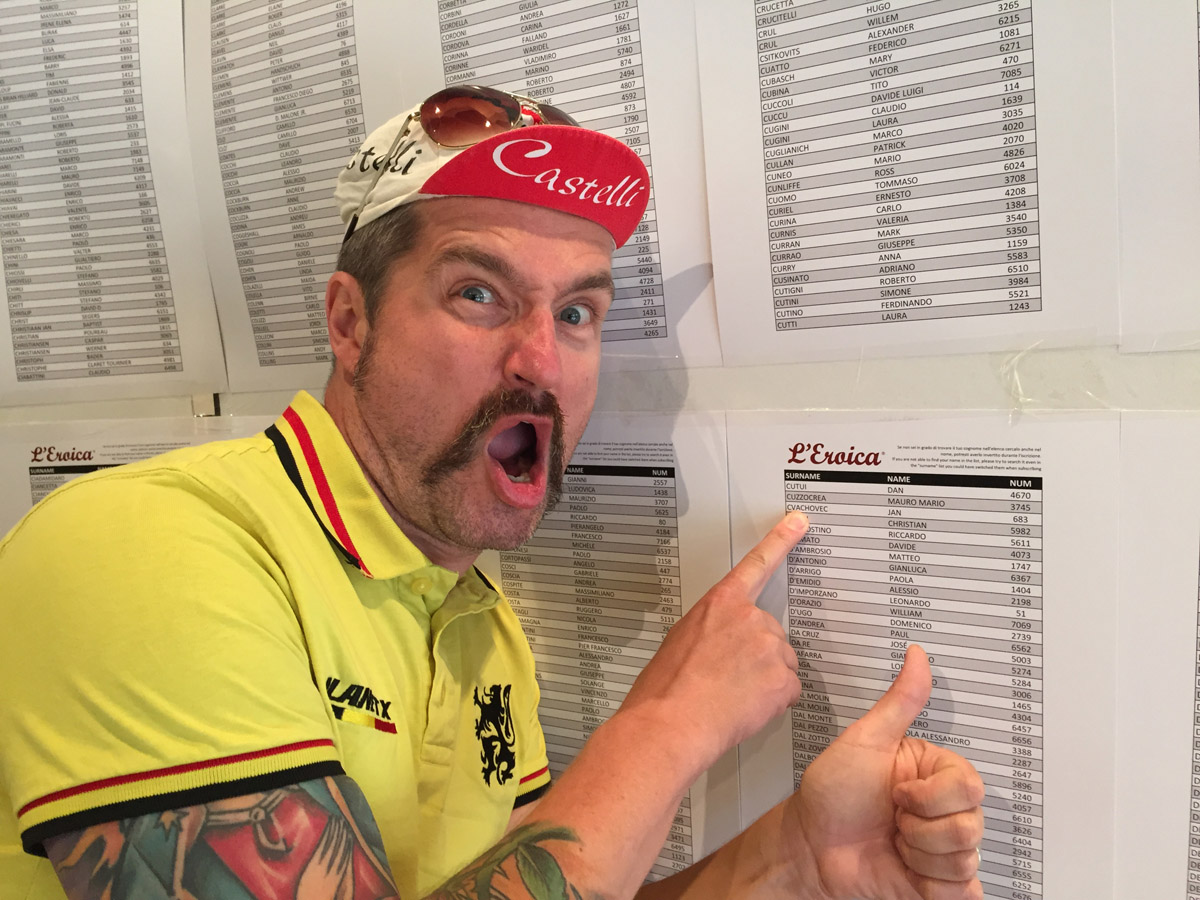 “With all participants in the house, the number of Gaiole [village] inhabitants grows from not even three thousand to nearly nine thousand. Finding an accommodation in this period is close to impossible and so many people have to use local football stadium for camping. Gaiole is flooded by people in historical cycling kits and costumes visiting the long-anticipated event which is significantly supported by the city hall. How important is the event for the local economy is visible in the fact that the 209km road is permanently advertised to promote the region and lure foreign cyclists to visit Gaiole any time in the year.

“I just wondered what bike should I take. If I wanted my Pinarello to match all the requirements, I would have to pimp some components so I took my 40-year-old Favorit bike I got as a gift for my 40th birthday. Instead of tuning the Italian classic, I decided to take this 1976-made fellow with me. I cleaned it, greased the moving parts, and set out for the trip with my family. 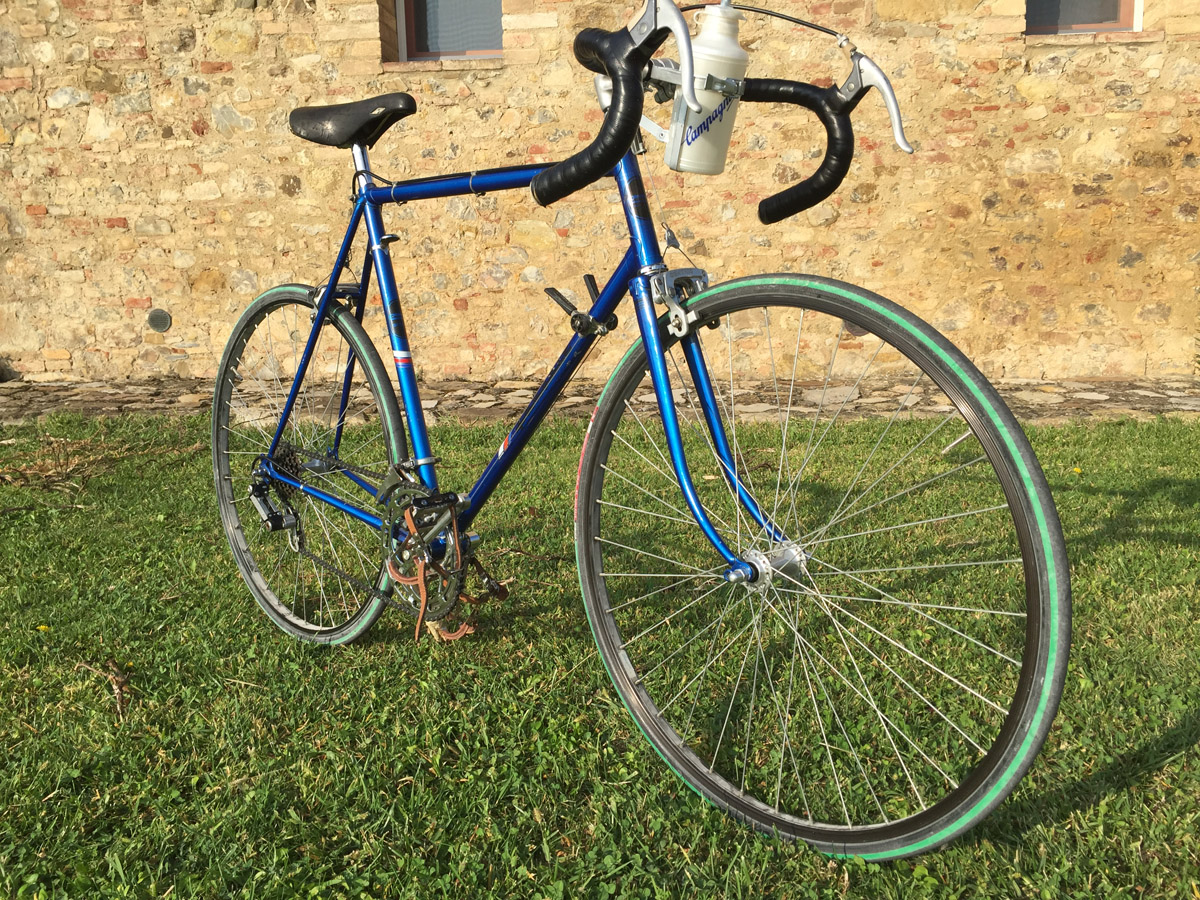 “L’Eroica is open for participants with various levels of fitness as it offers routes from 40 to 209 kilometres. Most of them are heading south to Tuscan Montalcino. The ratio of tarmac and gravel roads – which are called Strada Bianca – is about 50:50. There are no big hills but sometimes you come across a short and steep climb where you have to dismount the bike and push it as the old derailleur gears are not enough to enable pedalling. On the other hand, sometimes you can meet 60-year-old greybeards doing well even with single speed bikes.

“The time of the ride is not measured so the event is more fun than a real race. We started at 6 AM with the sun still down and with the road climbing up to the Castello Di Brolio estate lined by flaming torches, which made the early part a spectacular experience. 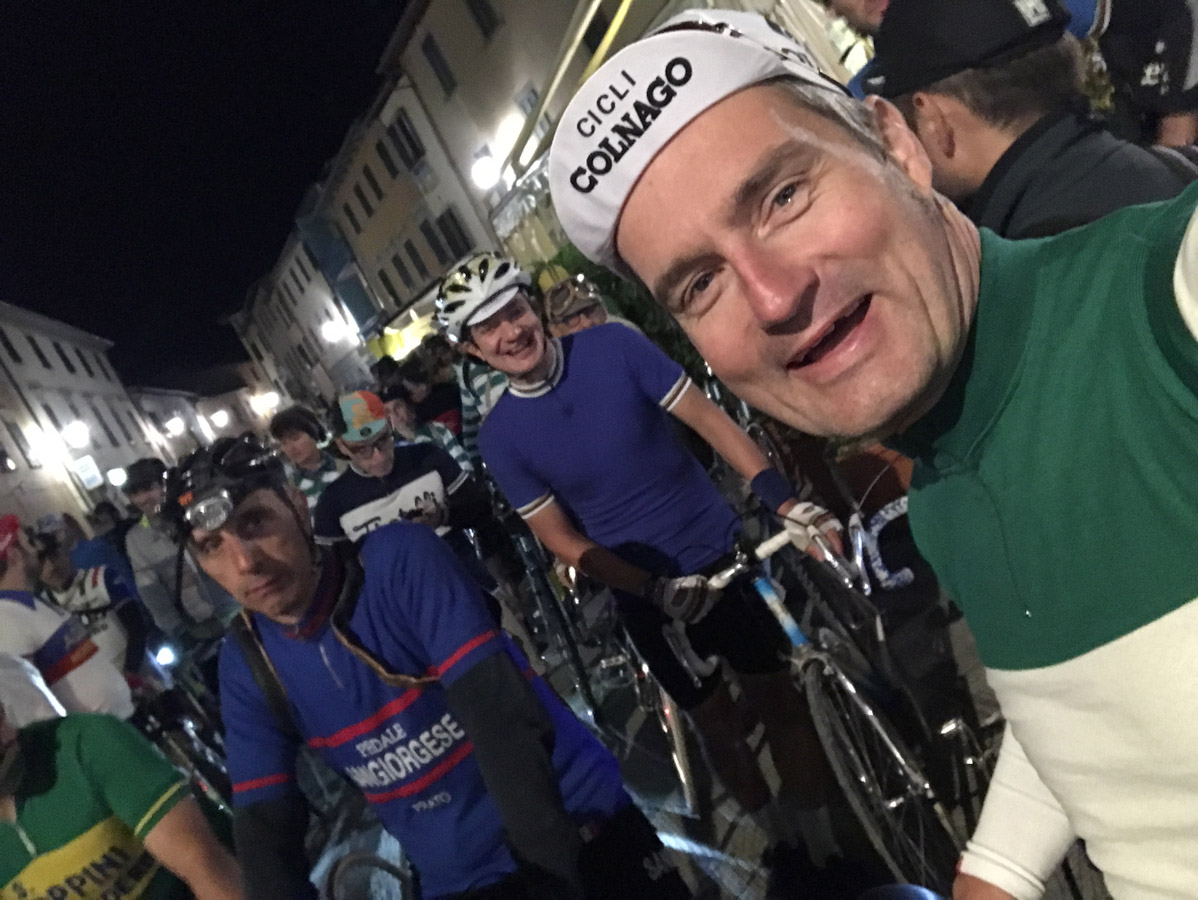 “While in 2016, the rain that soaked us since early morning turned the gravel roads into a muddy course, the roads were dry and dusty this year, making them hazardously slippery in many ways. However, it’s the weather that contributes to the event’s magic.

“The great thing is the local flea market where you can get everything including complete bikes, rare components, and historical accessories. I resolved to put on the shoes I bought on the market the day before the race which proved to be an unfortunate decision. Without even trying them out I got on the track just to find they’re far from being comfortable. More fatal was the fact I completely underestimated the length of the route and wasn’t prepared enough for such a portion of kilometres. 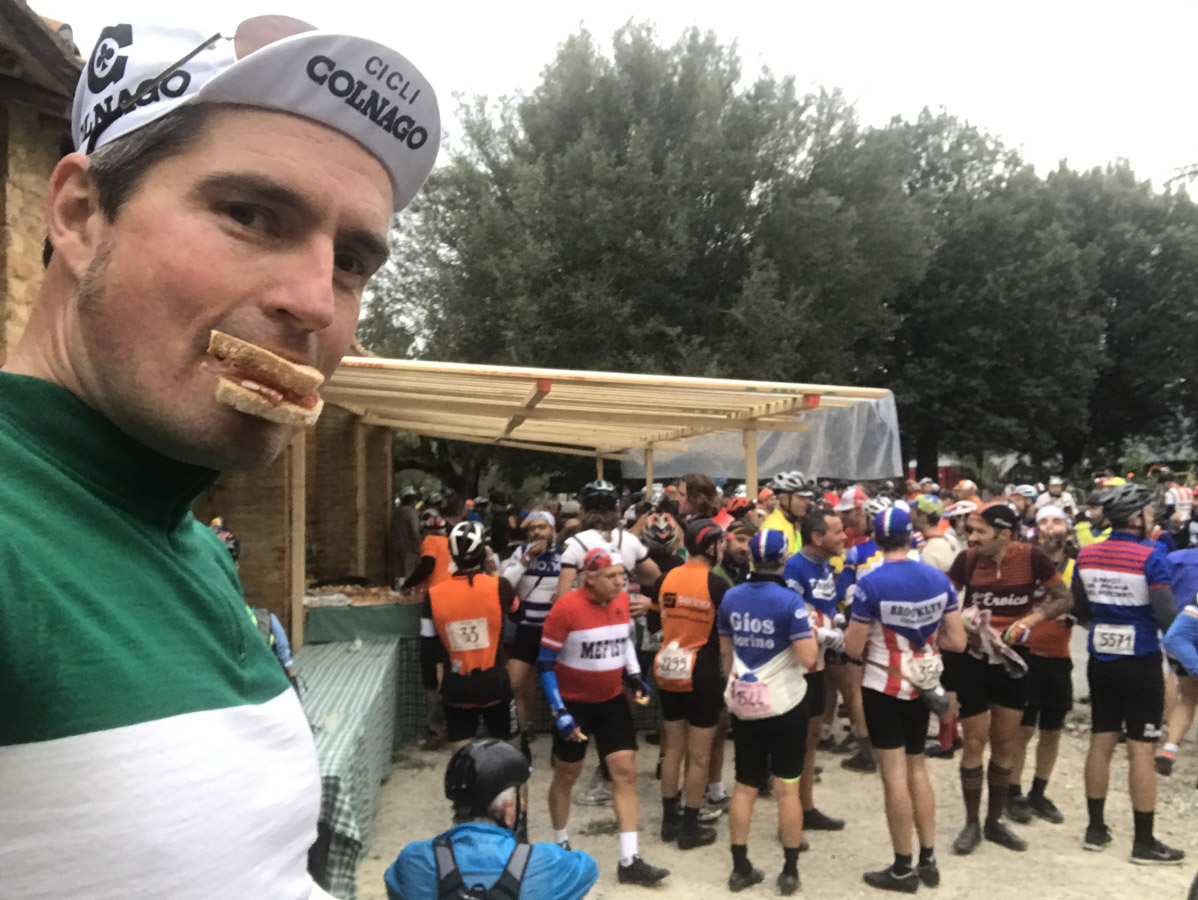 “From the previous year, I only remembered the pleasant elements like refreshment stations, delicious wine, crispy bread, tasty prosciutto or yummy cakes, and I entirely forgot that roughly at the 80th kilometre, there was a 12-kilometre long gravel climbing. Even though I got magnesium from my friends and licked salt at the refreshments stops, I struggled with painful cramps all the way between 80th and 160th kilometre, where I found myself unable to go any further. Unfortunately, I had to give up, but even that didn’t change anything on the fact that I enjoyed the day extremely.

“Best of all are those plenty of people you can talk to about the collectively shared passion. Sometimes you just see a guy riding an unusual bike brand or wearing an interesting jersey, so you stop for a short chat about the history of the goods. At the same time, everyone wants to enjoy the ride as a great sporting event and have a chance to encounter what the cyclists have been experiencing many years ago.

“L’Eroica has awakened an enormous interest all around the world and so today, you can take part in similar races held under the same name in South Africa, California, Luxembourg, Paraguay or Japan. I believe that the event’s founder Giancarlo Brocci is probably making a good business out of it, but at the same time, he’s doing it with heart. Every participant is pleased just by opening the starter pack including a bottle of wine, a big can of coffee, and starting numbers on cloth (to be attached to your jersey) and a cardboard (for your bike). Every detail corresponds to how it used to be some sixty years ago.

“Unfortunately, the whole entertainment becomes extremely addictive. As soon as you enter the flea market with the beautiful bikes made by Colnago, Bianchi, Moser, De Rosa, and many other less known or forgotten brands, you realize that you’ve been trapped. You’d be also surprised to find all the spare parts from the old sets including the tiniest screws, nuts or wheels. All the people are so cool and they love to talk to you about the amazing history of cycling. Even though the ride itself can be a struggle, it’s worth it and I definitely want to come back again.” VIDEO: What’s It Like to Win a Cycling Trip to Mallorca with Stephen Roche? The No. 1 Dietary Bad Habit