Attacked by hornets and struggling with flu, We Love Cycling writer Adam Marsal follows his mate Richard Gasperotti on a quest for a title of a MTB stage race finisher. Are they going to make it to the end?

In the morning after the 2nd stage, I woke up totally battered. Standing with my coffee mug in the dining compartment was alright so far but I preferred not to imagine me doing anything else. The “harmless” flu I was fighting through recent days has overgrown into a nasty sickness. There were only two things I knew for sure: I felt miserable and I had to go anyway.

With the 3rd hilly stage ahead, I needed to make a tactical decision: to change or not to change the chain ring that makes my climbing simply too tough. I could either keep the current one with 32 teeth, or I could replace it with much smaller 22 teeth piece. According to the pain in my legs, I decided upon a swap. The guys all around were mocking my tiny sprocket, labelling it to be only good for trials and wondering how I would be able to pedal on a flat stretch. But I didn’t care. There were no flat parts in plan that day. Fast forward to today. 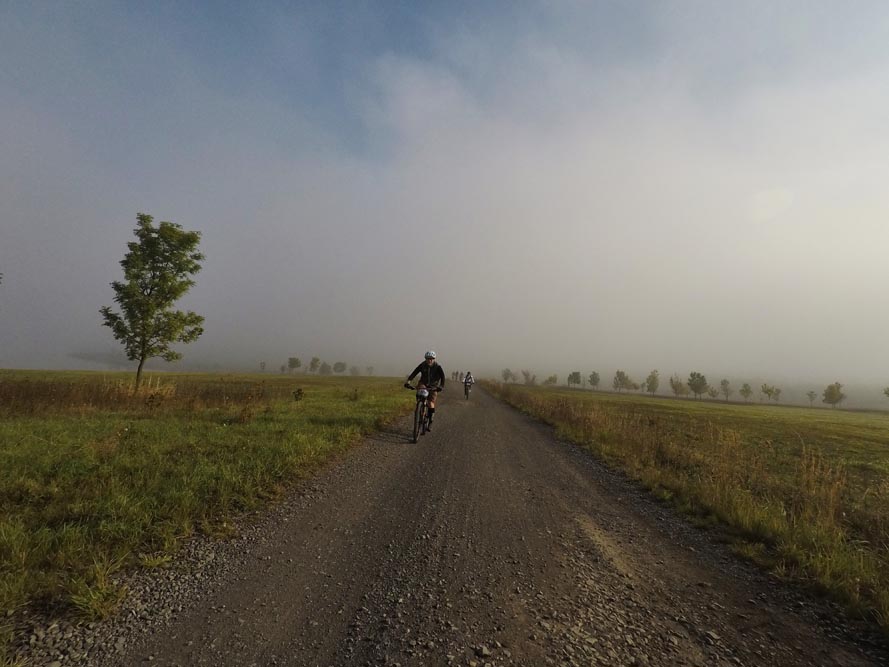 Today’s stage is a special one, consisting of completing four 8km-long loops. Hopefully, a smaller ring will help me to get a better climbing rhythm. We’re supposed to start from the downtown of the Czech spa city Marianske Lazne. The fancy resort became famous in the 19th century when many European rulers and celebrities were enjoying local healing carbon dioxide springs. But now, there are crowds of German tourists making complimentary comments about our bikes and wishing us good luck. At the starting gate, I’m already missing some teams that didn’t make the previous stage in time and left the race, however, there are still many to compete with. We’re finishing our coffee shots and hopping on the bikes. With the starting horns howling, the peloton goes off. After several hundred meters, we make it to the local ski resort where a steep slope is waiting to turn upcoming hours into a muddy inferno.

It doesn’t take a long time before the leaders disappear and leave me alone with my pain. Or almost alone – there’s still Gaspi, waiting for me at the top of each peak on the route. Despite the power output I manage to produce, I feel as if I were standing in one place. The roots are slippery and mud is swallowing my wheels. Resignedly, I follow my mate Gaspi but approximately in the second third of the first loop, I am very close to giving up.

In this very moment, I got the whole idea of racing in pairs. The rule is not only about a helping hand when you get injured or lost somewhere in the wilderness. Mainly, it’s about pushing each other’s limits and about not letting the other down. If I gave up, I would be responsible not only for my own failure but also for the defeat of my friend.

That’s why I have to forget the pain. I push the bike when the trail becomes too steep. At least, I’m enjoying technical downhill sections on roots and loose stones. Although I am not far from vomiting in the hard parts of climbing, I try to eat and drink as much as possible to regain energy at the refresh point, which is placed at the end of the loop. I dismount the bike, push it up the hill mounting it again on the top. Despite Gaspi’s support, we reach the finish line some 14 minutes after the time limit. Completely exhausted, I grab a beer and celebrate the end of the torture. I’m not sad. I know it’s been my fault that we came late but on the other side – I haven’t given up which makes me proud. However, I’ve also realised that without a thorough and long-term training, taking part in such a race has been a plain madness. From now on, all guys competing have my utmost respect.

We move to the train station in order to set off for the final stage. Even though we’re already out of the race, we’ll be allowed to take part in the ride. I take all medicine available and get to bed at 5 PM. Hopefully, tomorrow will be a better day.

The “Masiv people” wake up at the train station in the industrial city of Most in Northern Bohemia. Dark buildings around us are swallowed by a thick fog. I really want to race but the idea of taking part in today’s ride seems beyond reality. I feel as weak as if I spent a night working in a stone pit. I eat scrambled eggs and a sausage with a firm resolution to stay in my compartment and not to poke my head out of the door for the rest of the day.

However, a cup of black coffee changes it all. With caffeine running through my veins, I realise everyone is busy with preparations for the last event. Once again, I have to reschedule cowardice to another day. Slowly and reluctantly, I dress up in my cycling kit and get out of the train. Gaspi is already waiting at the platform. “I’m telling you, I don’t want to hear anything about giving up, buddy,” he says. It would be silly to admit that in recent 20 minutes, I was not considering anything else but that. 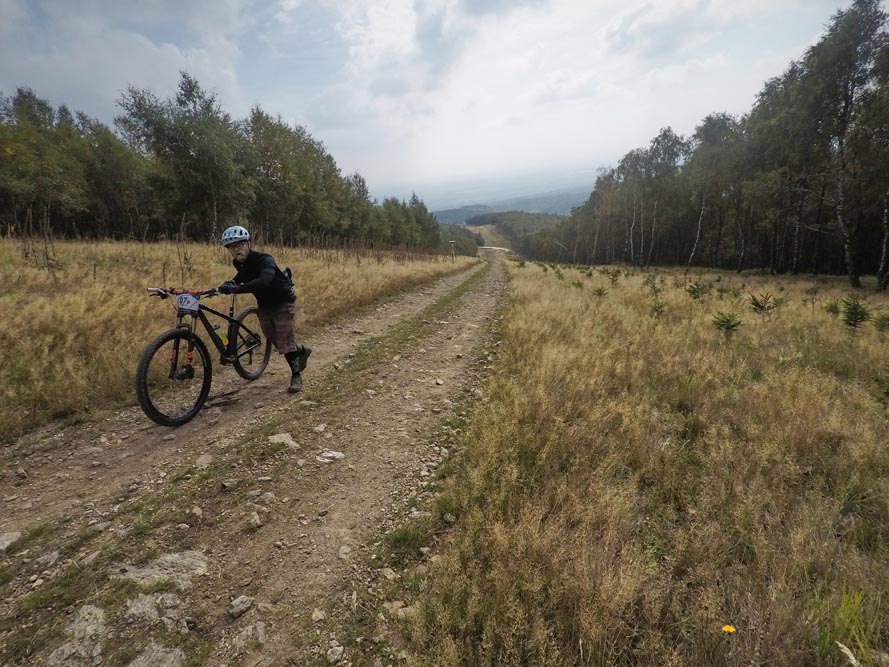 So I clench my teeth and get on my bike. My bottom would give a fortune for sitting on anything else than a bike saddle but apparently, there’s no better choice. The first part of the route is led through bottom of a basin from where the brown coal has been extracted since the second half of the 19th century. Observing a thin stream from the smokestacks of a remote power plant burning local lignite, I pedal as hard as I can. The smell of sulphur fumes running from the holes in the ground works a clear evidence of the coal presence. It doesn’t even take one hour before I’m considering to give up again. There’s no power left in my legs. No energy. No muscle watts. Even the desperation’s gone.

“Give up, and you’ll make me seriously pissed,” Gaspi says while watching me dragging my bike over the steps. What should I have said? To the finish line, hidden somewhere behind the second mountain range, it’s still about 47 km and the steepest climbs are just ahead of us. I eat dried meat. I look around and try to forget. I’m singing a song from the new Queens of the Stone Age album. I’m observing two ravens circling in the sky. Except for Gaspi we also have Majo – a Slovak rider – in our current group. In this mixed international team, we proceed to the furthermost part of today’s stage. Almost out of my mind, I hear the speaker pronouncing our names from some remote distance. The end is here. We made it!