If you’ve never in your life heard about the Burning Man festival, you’re either Amish or a luddite so you probably aren’t even reading this article right now. But theories aside, the Burning Man festival evolved from an installation of a single artist, who decided to build and burn down a wooden sculpture of a man to celebrate Summer Solstice, to an event making worldwide news, attracting about 70,000 visitors (2017) with a lot of social status-chasing celebrities among them.

As you might have already known, the majority of “Burners”, how the attendees call themselves, use bikes to get about the “Playa”, which is the huge space in the vast Black Rock Desert where the venue is set. However, due to such a massive amount of people crammed into one place, not everybody seems to get the “leave no trace” memo. Long story short, over 5,000 bicycles in varying states of maintenance and usability have been left behind, covered in desert dust. While this Facebook post from one of the BM workers generated a lot of outrage online, blaming the “privileged, careless visitors”, the “throwaway consumerism through and through”, and the organizers neglecting to acknowledge the growing Burning Man bicycle theft problem, something good came out of the situation after all.

With Hurricane Harvey and Hurricane Irma hitting and damaging extensive areas around Houston and the Caribbean, rendering hundreds of thousands of cars useless and stunning the public transport, there was a connection waiting to be made. Burning Man organizers started flooding social media with pleas for the bikes to be taken and few non-profit organizations answered the call.

Marek Musil: I Was a Bike Repairman at the Burning Man

Matthew Rockwell, a BM contractor and founder of the charity start-up Disaster Hack, sifted through the dusty bike pile and pulled out some 500 bikes that could be salvaged and send to Houston, free of charge, of course. Meg Kiihne, living just four hours from the BM venue, saw the direct impact of Hurricane Irma on her friends’ houses and lives through her Facebook account. Being a former bicycle shop owner, she saw the opportunity and knew that bikes could be vital in the recovery efforts after the natural disaster. She managed to pull together a quick Go Fund Me, rent a truck, and save and repair 110 bicycles. “We had to go through an intensive cleaning process of cutting off all faux fur, lights, squeaky toys, baskets, and seat covers all trapping clumps of clay,” Kiihne was heard. But under all that festival glamour, there were often brand new bikes for new owners to use. 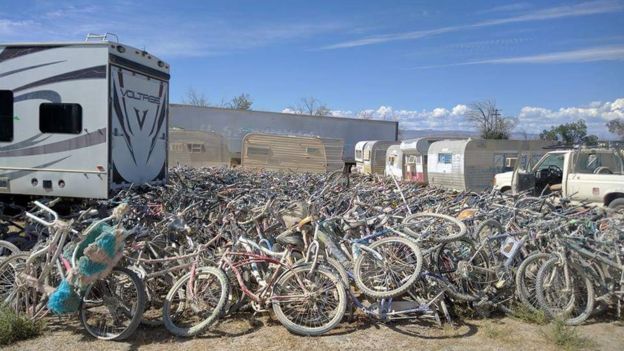 Both Rockwell and Kiihne knew that in order to make money to repair damages or to just buy food, people need to get to their workplaces more easily and that’s when bikes come into play.

Another approach was chosen by two local non-profits, the Reno Bicycle Project and a local branch of Kiwanis Club, which “adopted” about 1,000 of the abandoned bikes. Instead to shipping the bikes elsewhere, they’ll repair them and sell them to 2018 Burners. The costs generated from these sales will significantly reduce the costs that would be needed for scrapping the bikes and it will also help the non-profits to survive slow winter months, while still providing local children and the whole community with low or no cost bicycles. Another reason for selling the bikes to the next year’s festivalgoers is that their mechanisms are often damages by the omnipresent desert dust, rendering them useless for commuting around cities but making them perfect for 3-4 days of riding around in the desert again.

The best news of the Burning Man “Bike Apocalypse”, as it was called by the BM workers, is that within 48 hours of the social medial call to action all the bikes have been taken away and reused. But of course, it would have been much better if they didn’t end up there in a pile in the first place. Sustainability and reusability are hot topics nowadays so maybe we should change our focus on repairing things rather than looking for fast replacements in the future.

Cycflix: Netflix and Chill? Only for Those Who Ride Fast Enough