Born Marie Dorothy Buder, Sister Madonna felt the calling to become a nun at the age of 23, devoting her life to the Father, the Son, and the Holy Spirit. It wasn’t until later in life that she began to see life from a bicycle. At the age of 48, a Catholic priest called Father John encouraged her to explore her “mind, body, and spirit” through the holy trinity that is the triathlon. Competing by biking, running, and swimming certainly seems to have resonated with Sister Madonna – at age 87 she’s still training.

Nike chose to feature Sister Madonna in an advert because, to them, she’s an athlete who refuses to conform to the conventional ideas of age. It’s certainly unusual to compete in your first triathlon at the age of 52, which she did in 1982 in Ireland.

In an act of persistence, with perhaps a little penance, Sister Madonna got back on her bike and at the age of 82 she broke the Ironman record for the 80-84-year-old age group – a record that still stands. Sister Madonna’s aim is humble, to challenge herself and compete, for her own spiritual journey. Along the way, she notes, “I have opened up age groups in my life that never existed”.

A funny kind of Saint

The efforts of Sister Madonna haven’t gone unnoticed by the athletic community, and she came as close to being sainted in her lifetime as she’s likely to get – in 2014 Sister Madonna Buder was inducted in the USA Triathlon Hall of Fame. 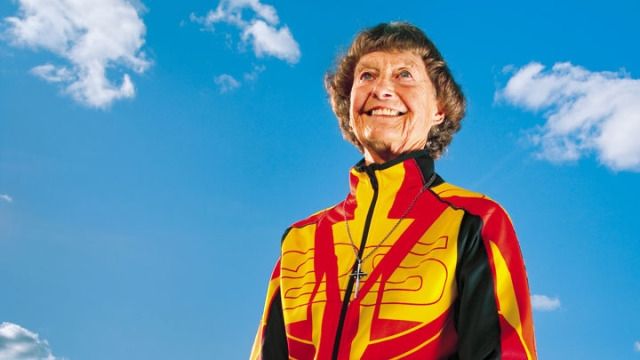 Sister Madonna said her mission was, “to change the world that you are in, give to the world what you have, and serve the world with who you are”. It’s safe to say, the Iron Nun on a bike did all that, and then some. How to Choose Your Tyre Pressure