The women of the Druk Amitabha Mountain nunnery don’t hide from a fight. Ever since the order based in Kathmandu introduced martial arts training in 2008, a practice traditionally reserved for men, they go by the name of “Kung Fu Nuns” in the Nepalese and international media. The exercise has since been a source of strength and confidence, that they are happy to pass on to others – to help and educate.

When the devastating earthquake hit Nepal in spring last year, leaving almost 10,000 dead and millions homeless, the nuns refused to be evacuated. Instead, they remained in the capital, offering their help to other victims of the catastrophe. It was this determination that gained them international media attention.

Less than a year later, the “Kung Fu Nuns” just completed a new challenge. Out of the 500 women presently living at the nunnery, 250 engaged in an epic 2,200-kilometre-long bike ride from Kathmadnu to the Indian capital New Delhi, wearing red-and-black cycling outfits and accompanied by only three men: two mechanics servicing the Chinese MTBs used, and the leader of the order, the twelfth Gyalwang Drukpa. It was him who suggested the project as a means to promote education, gender equality and environmental awareness.

On their journey, between late November and January, they visited villages and Buddhist temples, met with local communities and taught people about the importance of women’s right for education. Additionally, they gave performances of their MA skills, which they understand as part of their spiritual exercise, good for both mental and physical strength. Besides, they followed their usual routine, getting up very early, meditating, praying and eating only two meals a day. Skipping one meal per day, supper, helps them feel physically lighter and more agile – most cyclists would do exactly the opposite if on a +1,000 miles trip.

“I started kung fu to introduce gender equality,” the Gyalwang Drukpa told Delhi’s Mint, the second biggest daily newspaper in India, when it was covering the bike ride in winter. The practice proved to give girls and young women confidence and help them meditate. “They were asked a couple of times if they were scared taking up such a long cycle ride. They would say, ‘No, we know kung fu’,” the spiritual leader told Mint. “They are not experts when it comes to cycling. But they are determined and confident.” 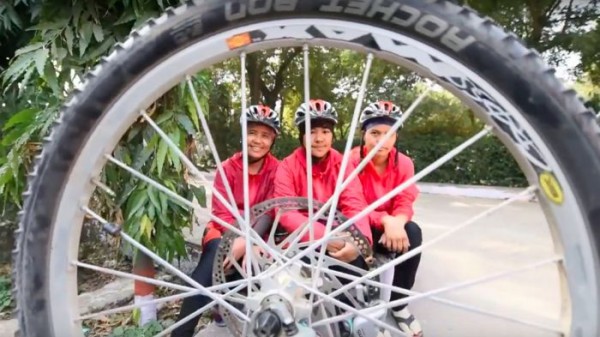 Determination, confidence, and dedication: the biking nuns are probably the best proofs of their own teachings, making them role models for many in the Himalaya region and beyond.

In Nepal, where most of the young nuns come from, educational standards are still different for girls and boys. The country has a sex ratio of 0.94, and a corresponding parity in employment, but women are paid only about half the salaries men get. Regarding education, only about half of Nepalese women are literate, while three-quarters of the male population can read and write, as the World Economic Forum states in its 2015 Global Gender Gap Report. 12 Tips from Our Cycling Community: The Best Ways to Build and Maintain Endurance