Villagers Throw a Birthday Party for a Dangerous Pothole

To make a point to the Nottinghamshire County Council in the UK, local residents decided to throw a birthday party […]

To make a point to the Nottinghamshire County Council in the UK, local residents decided to throw a birthday party for a particularly dangerous pothole. The road has been damaged since at least March 2015, and it is only getting worse. People from Plumtree where the pothole is located have been complaining about it for months, but nothing has been done so far. The tweet below might change things, though, as the celebration went viral quickly.

The #Plumtree potholes mark yet another birthday .. pic.twitter.com/YsRAAF03v3

“I nearly put three candles on but I thought that might be pushing it. It’s dangerous for people who drive, and who cycle, because if you come to a pothole you have to swerve out in to the road which makes it unsafe for everyone. I last complained back in September or October time last year and they came and said they weren’t bad enough to fix,” Vonnie Daykin, the organiser, told Nottingham Post.

The media attention it’s received even got the council’s Twitter manager to reply. 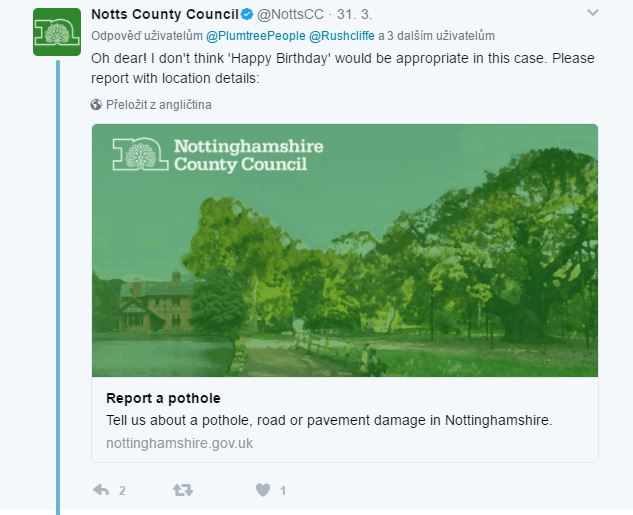 “We take the quality of highways surfaces in Nottinghamshire very seriously and use inspections to prioritise our planned maintenance works and make any critical repairs as needed. In this particular case, we inspect this road monthly as it is classed as a ‘C’ road and any defects that are considered a hazard are identified for repair. We have a number of enquiries recorded from this caller with each one resulting in an inspection,” Don Fitch, a team manager for Via East Midlands, said.

Do you have problems with potholes in your hometown? What strategy do you use to get your council’s attention?