Bahrain-Merida team’s ace can now boast a customized ride. Merida gifted this “a rather special version” of their Merida Scultura […]

Bahrain-Merida team’s ace can now boast a customized ride. Merida gifted this “a rather special version” of their Merida Scultura model to Nibali for the occasion of the first stage of the Giro d’Italia that is to take place later this week. 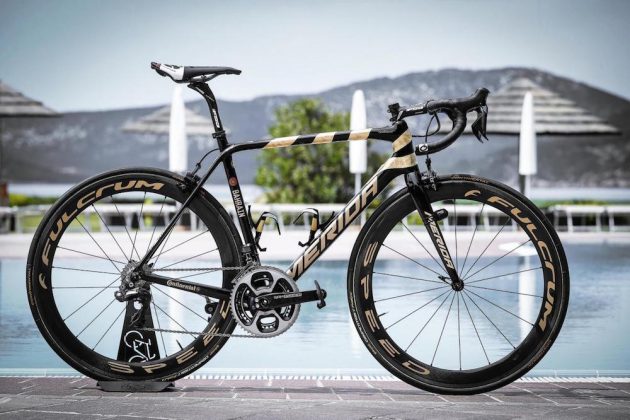 The bike was unveiled at Bahrain-Merida’s latest press conference and took everyone’s breath away. The idea behind this one-of-a-kind beauty was to pay tribute not only to Nibali’s achievements but also his dedication to take home the Giro victory for the third time. The decorative ribbon made of a genuine gold leaf sheets hugs the bike’s sleek black frame in spiralling fashion and features names of all previous winners of the Corsa Rosa. The design is said to mirror the look of the race trophy and the head tube features the word “Centenario” painted in gold, hinting at the fact that this renowned Italian race celebrates its 100th anniversary. Therefore, the bike is also honouring not only Nibali and other champions but the traditions and reputation of this grand cycling event.

Nibali will use this actual bike, along two others, in his attempt to win one more golden trophy. Now this is what we call riding in style.

Energy Bars – How to Choose the Right One

Is the Giro d’Italia’s Descending Competition Life-Threatening for Pros?

Cyklomatofon: The Crazy Cycling Machine Designed for the Burning Man

VIDEO: Watch This Saddle Transform into a Bicycle Lock

Should Cyclists Fuel With Candy?