There’s no other race like this. It’s a 1,000-mile, human-powered, ultra-endurance race across the Alaskan wilderness. The countdown is running, and only a couple of days are left to the start. Welcome to the Iditarod Invitational race!

Once you decide to organise a professional biking race, you need money. To attract potential sponsors you have to make the race unique – at least, your race must be the most difficult, dangerous and never seen before throughout the history of mankind. In other words, you need a great marketing. But this race is a different story. Here, any kind of artificial marketing would freeze into a cube of ice.

Iditarod Invitational follows the historic route of the original annual long-distance sled dog race across the entire US state of Alaska, which is held in early March since 1973. One year before the race, participants have to finish a 350-mile prologue race before they can enter the serious 1,000-mile event. The race is limited to 50 contestants, who can choose the mode of travel (bike, ski, or hike) and the race distance (350 miles to McGrath, or 1,000 miles to Nome). They ride through blizzards causing whiteout conditions, sub-zero temperatures and strong winds, which can cause the wind chill to reach −70 °C. 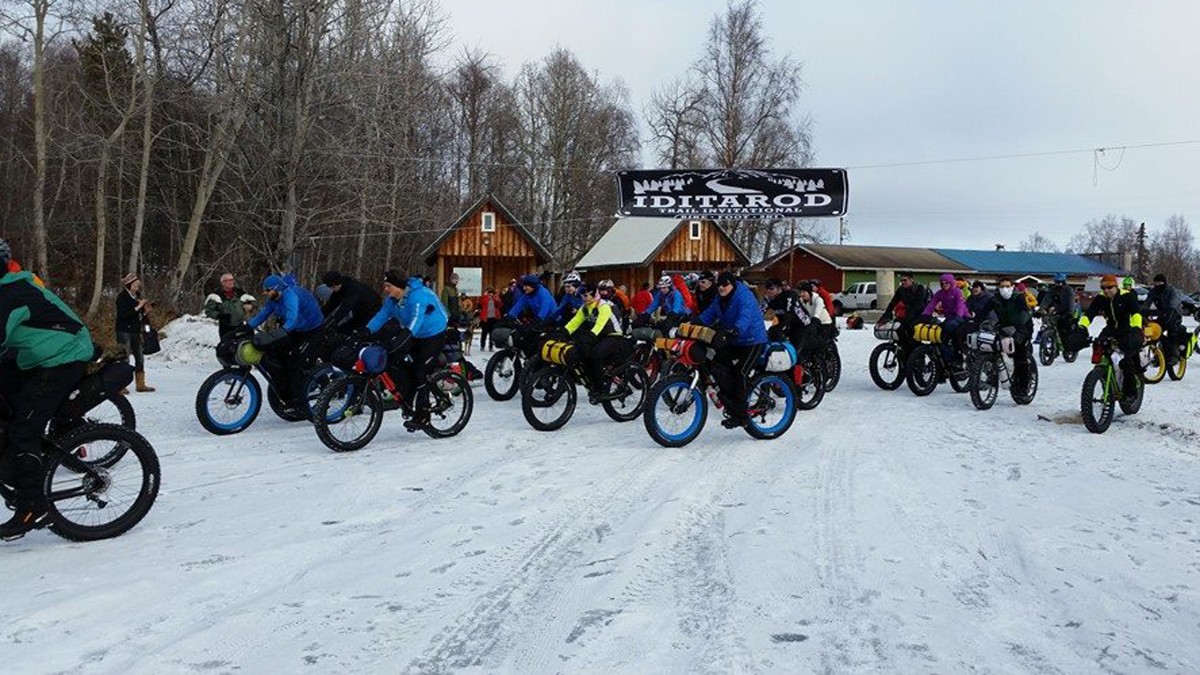 One of the stops along the trail is an abandoned gold-rush settlement, Iditarod, which means “a distant place” in native Athabaska language. That explains it all. The trail runs through a harsh landscape of tundra and spruce forests, over hills and mountain passes, across frozen lakes, swamps, over the roadless backcountry between Seward City and Nome along the Bering Sea coast. There’s no designed or marked route – just the checkpoints you need to go through. Experienced participants talk about their respect for blizzard sweeping the snow and making the roads invisible, and about the whiteout hiding the marks needed for orientation.

The machines & the gear

The ride is intended for fat bikes only – modified mountain bikes with very low pressure and knobby tires ready to tackle the deep snow. Because of extreme temperatures, factory grease from the chain, the freewheel and other moving parts must be replaced with a special one to prevent it from freezing. Since there’s almost no assistance provided, riders must carry food, drinks, portable stoves, lids, sleeping bags, clothes, GPS navigation and other things needed for survival. Everything necessary is carried in a pack attached to the frames, handlebars and seat posts. The basic approach is about finding a balance between functional lightweight travel and packing the right equipment to ensure survival. Riders must also think about such details as another set of spare gloves or emergency chemical heaters. Because a great part of the ride is done in the dark, all riders are equipped with efficient head lights. The batteries are usually connected by cords and stored somewhere close to the rider’s body to stay charged as long as possible. 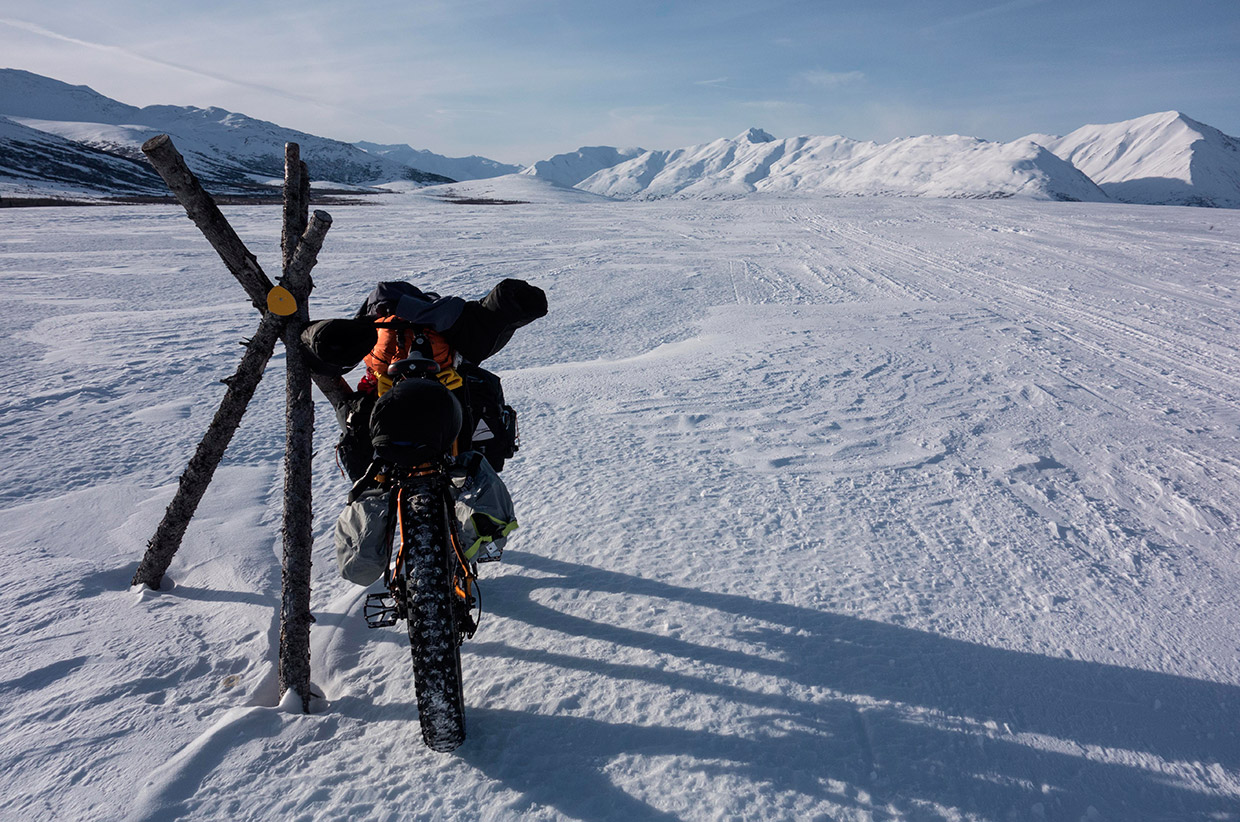 Nobody tells you what kind of activities can make you ready for this experience. You can spend a month on your road bike, but during the race, the snowfall may compel you to wheel your bike for a half of the track. Iditarod is about the ability to orient in the backcountry, about resilience and also about your ability to withstand loneliness. Locals have a big advantage of being used to harsh conditions. Another question to keep in mind is where to test your gear in case you live in an environment, which is extremely different from Alaska in winter. While tyres and everything else can prove to be working reliably in temperatures as low as -20 °C, everything can change rapidly when it drops below -30 °C. Quit? Give up? In the beginning, there’s nobody who would have such a word in his vocabulary. After hundreds of miles in the legs, even this can run through your mind. Determination may be replaced by exhaustion, and it feels like crawling from checkpoint to checkpoint. Nonetheless, thirty-six-year-old Anchorage cyclist John Lackey broke the record of the 350-mile track in 2015 and finished it in only 1 day, 18 hours, 32 minutes, breaking the previous record by 10 hours and the best finish of Iditarod dogs by eight hours. The 1,000-mile race is far more difficult. The faster northern route was covered by Jeff Oatley in 10 days, 2 hours, 53 minutes in 2014.

Most Extreme Bike Expeditions in History

The riders look like a big anti-freeze army. From the start, you see cyclists wearing masks, goggles, gloves, heavy winter boots with overboots, and insulated helmets. One day, it is so warm that it’s possible to ride with only thin wool liners on the hands, next day, full-on big insulated mitts are necessary.

You’re alone in this

If something happens, the only possible way to be rescued most part of the time is self-rescue. “This race is not for everyone. A mistake at the wrong time and place in the Alaskan winter wilderness could cost you fingers and toes or even your life. For those who do not agree with this philosophy, expect marked trails and more support, there are other races out there which will cater to your needs,” trail manager Bill Merchant warns.

Would You Dare to Take Part in Some of the Most Extreme European Races in Snow?

The Iditarod Invitational bob-sled race, that inspired its biking sibling, has been held since 1973 in memory of the brave people who brought anti-diphtheria serum to Nome in 1925, during an outbreak of the disease.

Don’t Want Your Bike Stolen? Get a GPS Bike Tracker