Don’t Want Your Bike to Be Stolen? Get a GPS Tracker Before It’s Too Late

Do you love your bikes? Of course you do. But some people would love even more to steal them. And […]

Do you love your bikes? Of course you do. But some people would love even more to steal them. And in case they succeed, you need a way to fight back.

If you are looking for the best way to protect your bike against theft, and holding a baseball bat and never leaving its side is just too inconvenient for you, try GPS bike tracking. It is so simple that even people who are virtually untouched by IT can use it. The GPS tracker is a device that can be attached to your bike and connected to your smartphone. Generally speaking, the GPS trackers used to be big black boxes, which were as discreet as if you accidentally forgot to undress your violet clown wig before entering the Sunday church service. However, now there are also some refined solutions that can be hidden somewhere deep in your bike’s tubes or disguised as common bike parts, such as the light or the headset.

For example, the Startup Sherlock system from Italy is so tiny it can be easily installed inside the handlebars, which makes it completely invisible from the outside. You only need to connect the GPS tracking device to your app profile. Once you park your bike, the system is switched on automatically, or you do it deliberately on your own – depending on the type of your GPS tracker. Now, you enter a café and stay there chatting with your FB friends until somebody comes and takes your bike. At that very moment, the investment into the tracker starts to pay off. 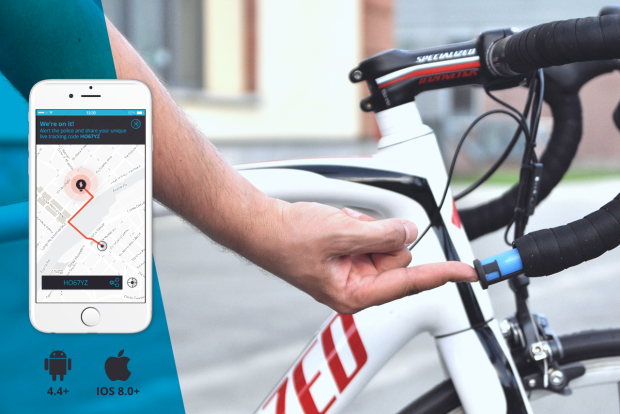 In case of a theft, the Sherlock app will track your bike and show its journey on your screen so you can find it and get reunited with it. To do this even better, you can share a tracking code and webpage URL with the police to enable them to check the real-time position of your bicycle. According to the guys from Sherlock, this way the police can chase the thief using their own mobile phones. Although it sounds like a great idea to us, we’re not sure how willing the police crews would be to use their own mobiles in order to find someone else’s property…

Other manufacturers have a slightly different approach. Spybike from the UK produces three models of trackers that look like standard bike components. You can choose a tracker incorporated either into the LED light or into the seatpost. Another available option is a miniature GPS tracking system concealed in the headset of the bicycle that is indistinguishable from a regular top cap. The price varies from 82.50 GBP to 97.50 GBP according to the selected type. The system relies on a SIM card that notifies you by SMS if the bicycle moves. Without worries, it can be used in any country covered by the 2G GSM network.

You can either acquire a prepaid SIM card that comes with the tracker, or buy your own from your local operator. The device is paired with your smartphone via Bluetooth and is activated automatically as you move away from the range of the bicycle. The journey of your stolen bike is stored in a database and can be followed on your computer or mobile phone. The producer promises that their devices shift the balance of power away from thieves back to the owners. We believe the same.

Give yourself the best chance of a stolen-bike reunion

Ask your insurance the right questions

In general, most people rely on their home insurance to cover their bike. The reason for this is that compared to dedicated insurance for a bike, it tends to be a lot less expensive and it is something that most of us already have. There’s a catch though. Those kinds of insurance policies are not designed for expensive bikes. Therefore, it is critical to find out exactly what your coverage is before you need it.

Write down the serial number

Ask any police officer what information they need about a stolen bike and they will tell you the serial number. Without the serial number, even if by some miracle your bike gets recovered it might not ever make it back to you. Don’t be slow about it either, once the bike is gone it’s probably impossible to find the serial number. There’s a chance the shop you bought it from has a record, but there are no guarantees. It’s your bike, it’s your responsibility.