Nothing makes your heart sink quite like the realisation your bike isn’t attached to the railing you locked it to. Many of us are turning to gadgets that help track our bikes – but which ones are worth shelling out for?

If you’re after a discrete and easy-to-use device, try IMMOBITAG. It represents good value and is small and easy to install almost anywhere on your bike’s frame. The warning stickers may even help deter bike thieves – especially those already known to the police. The police regularly pick up stolen bikes which trade hands on the black market all over the world. If the police find your bike, IMMOBITAG hope they scan your bike for radio frequency tags (RFID) before checking their database for your unique ID.

The police then call you to pick up your bike. That said, warning stickers alert bike thieves, telling them exactly what they’re looking for. A well-placed whack with a screw driver can remove an IMMOBITAG leaving everyone none-the-wiser.

The Boomerang is a GPS system mounted between your bottle cage and frame. You download an app, and it shows you exactly where your bike is. Even better, if your bike moves unexpectedly, the app notifies you so you can check in on its movements. The sight of a Boomerang may even deter thieves.

The #CycloTrac App is simple! Once activated, you can track & protect your #bike! #BikeMonth #BikeCommute pic.twitter.com/SiFCQGMymY

Unfortunately, all security gadgets are as strong as their weakest component. The Boomerang can be removed using a torsion screwdriver. Although a thief is unlikely to be carrying a range of torsion screwdrivers with them, they’re easy to shoplift in the places where your bike is most likely to get stolen – urban shopping hubs.

If you don’t want thieves to know your bike can be tracked, try the Sherlock. It fits inside your handlebars and looks like a plain black bar tape cap. 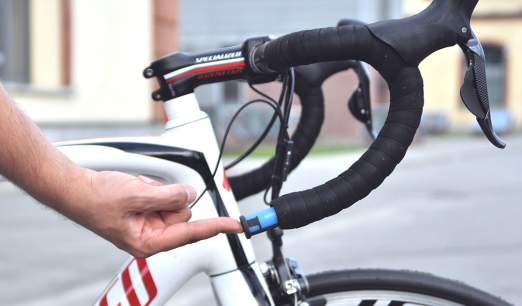 A thief would have to try removing the bar tape cap to find the Sherlock, which needs a bespoke Sherlock-made key to remove – not something that is easily found in urban shopping environments. The Sherlock also alerts you if your bike is moved unexpectedly, and tracks your bike to within 5 metres. This is a great option among GPS bike trackers.

Maybe you should just lock your bike securely

The best deterrent for thieves is a securely locked bike. Gold rated locks provide the best deterrent – thieves don’t want to spend time cutting through solid metal when the owner could return at any time. Tracking devices work when thieves get lazy – just keep in mind that they’re your last line of defence in the war against bike theft.