Not a sign in sight to point me the way to the border. I decide to ask a pedestrian; ‘How do I get to Mexico?’. He shows me the way and within minutes I pass by a short traffic jam waiting for their turn with customs, still, not a sign around. No ‘Goodbye’, no ‘Visit again’, no ‘Have a great trip’, no stars and stripes, no police. Nothing! Does Trump believe that he can keep ‘his people’ within the U.S. borders just by hiding all evidence of there being borders? Interesting…

There is the Mexican border crossing. Two young Mexicans in uniform gesture me to go stop on the side and they question me in broken English about my travels. One of them walks around my bicycle and prods my panniers as if he is checking them for… well yeah, for what? Judging by their wide open eyes and big smiles they mainly question me out of curiosity. When they’re done they tell me I can carry on, ‘Bye bye’, and so I do. 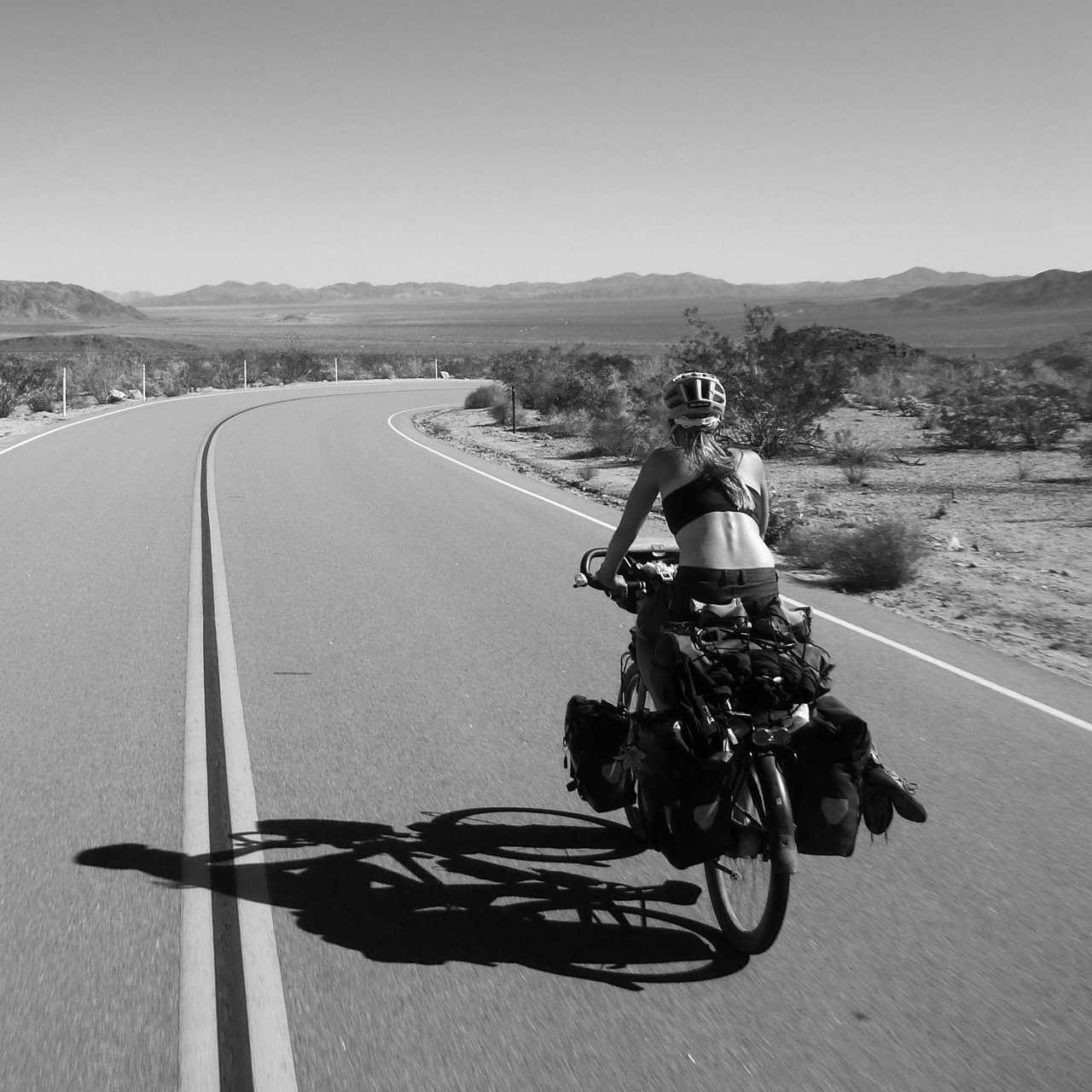 Suddenly there is life, colors, money exchange, shops, pedestrians. Wait a minute, did I just cross the border? I look around me to check if this is some kind of ‘tax free border area’ after which the official customs will follow, but ahead of me a long street stretches out in which Mexico seems alive and kicking. Nobody wants to see my passport; nobody wants to question me. I decide to turn around and roll back to the ‘border’. I find an office and ask where I can find customs. The young man looks at me with surprise and directs me to the office next-door. Apart from the officer behind the counter it’s empty. I ask him if he wants to stamp me passport.

He tells me it’s $30 if I want to enter Mexico, as if that would be a factor to reconsider my choice to visit this country. When I agree on the price he finally takes my passport and starts some administration. A few minutes later I’m back outside with a $30 stamp in my passport that buys me 180 days in Mexico. Once again I cycle into the lively colorful streets of Mexicali.

WELCOME TO MEXICO! (I say to myself, by the lack of any signs here too).

That’s how I cycled into Mexico a few days ago now. But before I proceed to take you with me into Mexico, I want to tell you about my last week in the United States of America. After writing my last blog I rolled into Joshua Tree National Park. Theoretically Shaun and I could’ve biked through this park in less than two days. That’s if it wouldn’t have big rocks scattered all of the place and if I hadn’t crossed the Sierra Nevada with a pair of climbing shoes in my pannier especially for this occasion. Because there is not water in the park we loaded up with enough liters for four days. We were cyclists with a plan! Though we hadn’t really planned much and hadn’t done any research on where to find the good boulders and didn’t carry any rope or boulder mats. In the back of my mind I noted that we might be scrambling more than doing some real bouldering or climbing. 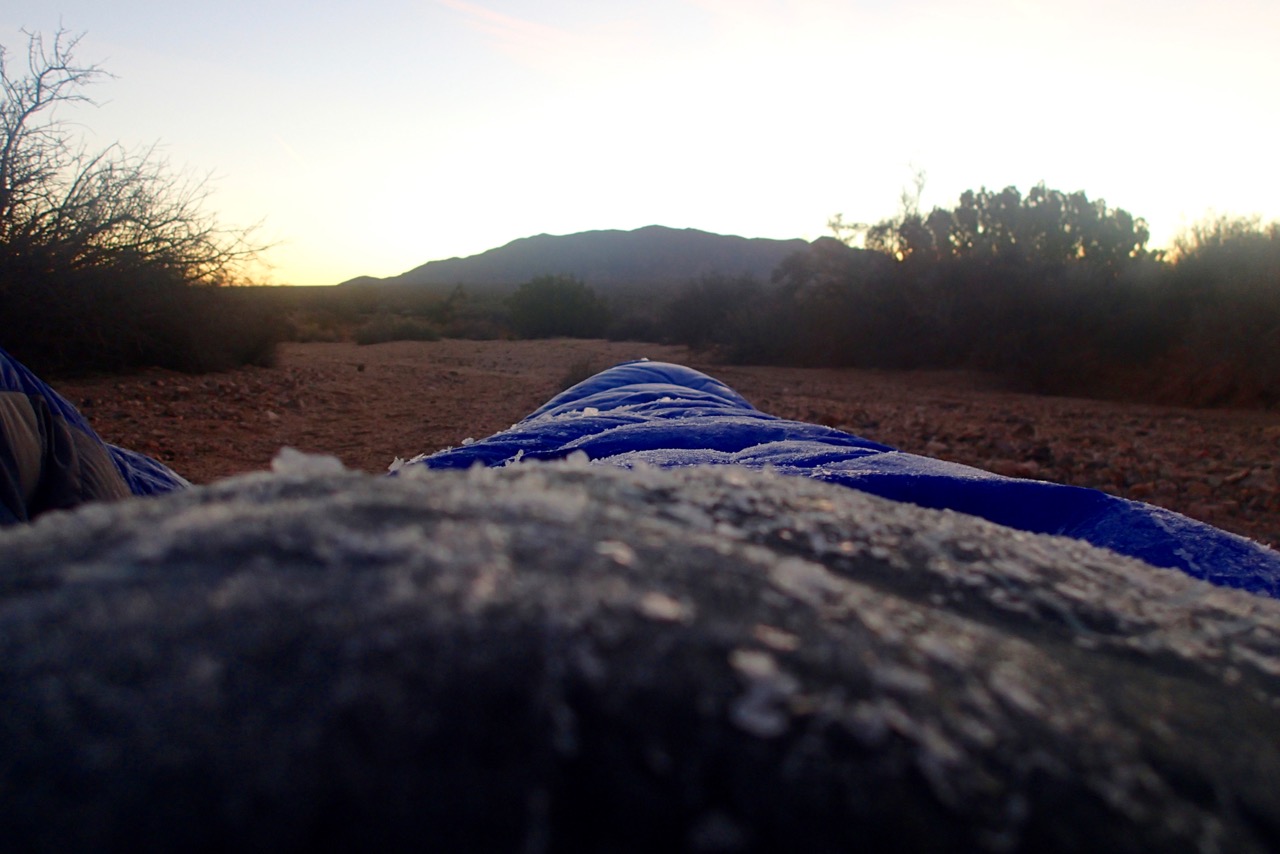 The sun was out, the area was beautiful, we had more time then miles to ride and it was the last week Shaun and I were spending together. All the ingredients you need for a few enjoyable leisurely days. In the mornings we started of slowly. Scrambled around the boulders where we spend the night, hung our sleeping bags out in the sun to melt the frost and prepared a fruit breakfast and coffee. Around 11:00 a.m. we’d decide to roll a few miles to the next collection of boulders for an early lunch, some more scrambling and a bit of reading. After that we’d roll a few miles again to find a place for the night to roll out our mats at the foot of some boulders and slip into some warm clothes before sunset. Three days in the park passed by that way. It almost felt like holidays!

From Joshua Tree we descended over 1000 meters of altitude to Mecca, a village at the north coast of the Salton Sea. Mecca turned out to be a Mexican town of which the inhabitants worked in farming. Mainly grapes and some citrus fruits. The Salton Sea, the biggest lake of California, lies at 69 meters below sea level and was accidentally created by some engineers who overdid the cut in the Colorado River to fill the irrigation canal to the farmland in the valley. The canal couldn’t handle the overflow and streamed into the dry lake bed of the Salton basin and formed the Salton Sea. 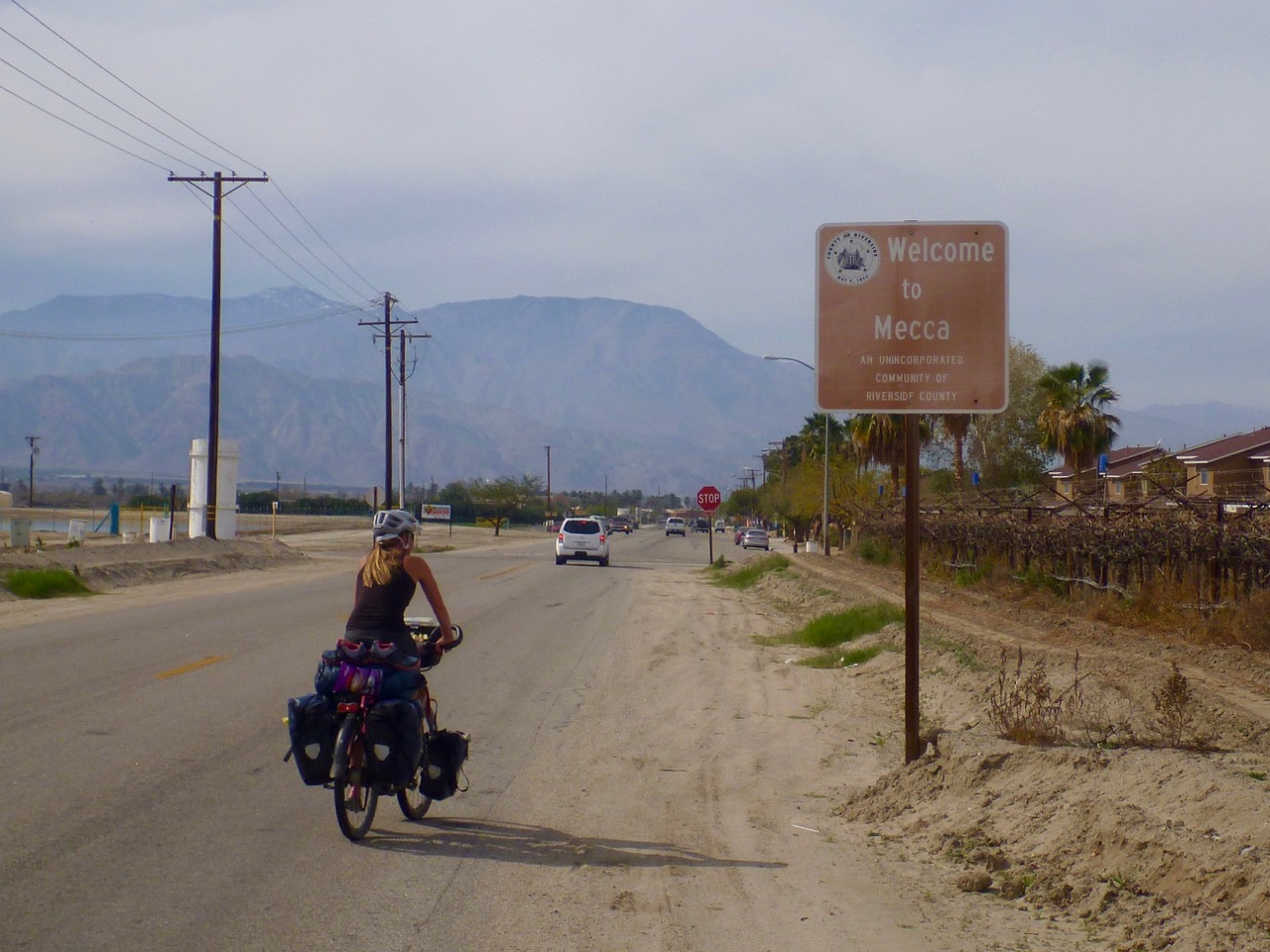 Around 1950 this area became very popular as a holiday resort. But through the years the water got saltier (up to 4,4% now, that’s saltier then the ocean) and the algae made for tons of dead fish on the shores. The lake lost its charm and the tourists stayed away. The road along the lake wasn’t as epic as I hoped, but there was a clear destination to look forward to; Slab City and Salvation Mountain.

Arriving to Niland, a town at the Salton Sea where the turnoff to Slab City is, it turned out that that place too had seen better times. Empty stores, a burned down restaurant and 80% of the people in the small grocery store missed at least a few teeth. Some were very interested in our bikes and trips and several proclaimed proudly to be a citizen of Slab City. We turned east on ‘main road’. After a few miles I saw it arise; Salvation Mountain.

Smaller than I expected, but beautifully colorful it lay there in the brown desert landscape. Leonard Knight’s Salvation Mountain.
A hill of sand expended with bales of hay and adobe (a clay right from the ground) and many layers of paint. For 25 years Leonard Knight lived and worked at his mountain. Why? To spread the message that GOD IS LOVE. That’s all, nothing more nothing less. At 80 years of age he had to leave to mountain and move to a care facility because of dementia. Two years later he died.

Slab City originates from 1965, when the county police forced people camping in the Mecca area to leave. Many moved to the abandoned Marine Training camp, now called Slab City. It’s a colorful collection of RVs, huts, tents and other structures people build to live in. There is no electricity, water, toilets, shops, trash pickup service or police control. If you want to demarcate a piece of land you just have to discuss it with the ‘neighbors’. Many people are only there for the winter season and leave again in summer for cooler places. Some to a home in the north (they’re called snowbirds), some travel. Everyone there is in search of at least one common thing: freedom.

On one of the concrete slabs, dating from World War 2, along the road arriving to Slab City, it says: ‘Question everything? Slab City. The last free place.’ On the other side, heading back to Niland, it says: ‘Caution. Reality ahead.’

Slab City governs itself. The pastor of the ‘blue church also guards the peace in Slab City. Everything is possible, as long as you don’t harm or disturb others.

Also to be found in Slab City is East Jesus, a community of artists (most of them in residence) that make art of junk. You can walk around and look at the humoristic, critical and absurd structures. 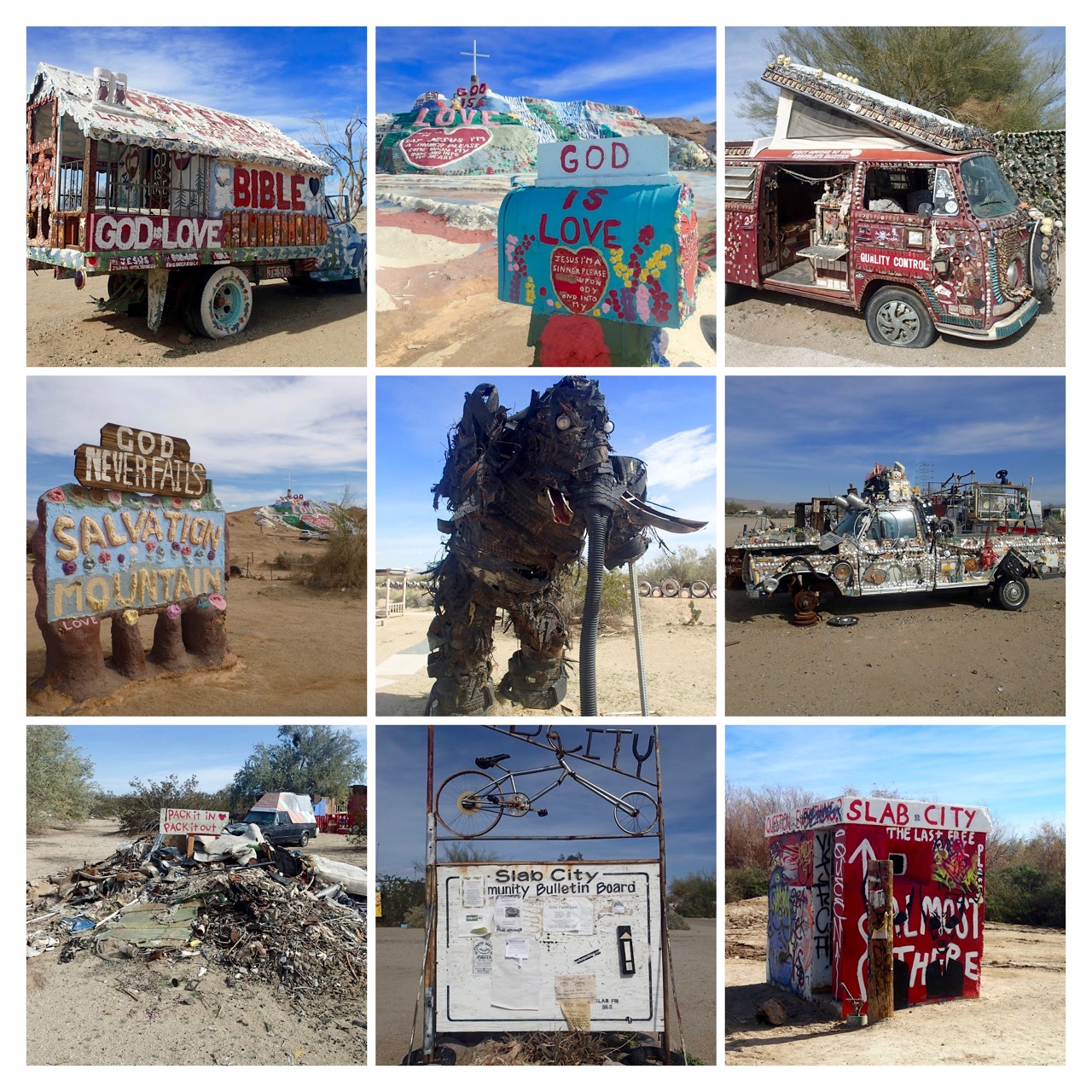 On my last day with Shaun we decided to visit the mud volcanos that were to be found amidst an animal refuge, farmland and big steaming factories. Obviously not a huge tourist attraction. The volcanos themselves were anything but huge. On a sandy flatland, near to one of the steaming factories, lay a dozen piles of mud. After the strong headwinds and washboard dirt road that we braved to get here it seemed a little disappointing, until we got closer.

We had to actually take a few steps up the mud pile, but once we looked into the crater beside the ‘blub.. blub… blub… blubber… blub’ there were my ‘ooooh’s and ‘aaaah’s to be heard. In those craters the thick brown mud bubbled up while make disturbingly human gurgling sounds, occasionally spitting a fat brown phlegm over the rim. I’ve NEVER seen anything like this!

The next morning in Brawley I said goodbye to Shaun, after 2,5 months of riding together. I’ve never before spend so intensively such a long period of time with someone. We did the math and came to the conclusion that our trip together had lasted approximately 1800 hours. Alright, the toilet visits, showers, popping in the grocery store alone and separate activities during rest days add up to maybe maximally 100 hours (probably a lot less) of alone-time which leaves us with ‘only’ 1700 hours together. Spread out over one year that would mean spending 4,5 hours with the same person EVERY DAY.

It was a challenge, more for me than for him.. and more because of me then because of him. I was regularly overstimulated. Spending 24/7 together and being a guest with many people, broken nights (I sleep light like a butterfly) and hearing each other’s same stories time after time in conversation with others. At times it was TOO much. On the other hand, there were a lot of great aspects to it: long conversations, great camping spots and illegal campfires, splitting the baggage weight fair (he a bit more than me) and sharing the enjoyment and suffering on the road. All together, we had a pretty awesome time.

He went west, I went south. And that’s how I arrived in Mexico alone. I’ve already discovered one of the advantages; the ‘blond-western-single-woman-discount’ at taco places. I won’t starve here, that’s for sure. Staying hydrated might make for a bit bigger challenge, since Mexico is one of those countries where you really really can’t drink the tap water and has big stretches of desert. For the first 190km I packed nearly 7 liters of water. Which wasn’t a bad idea, seen that at this moment, while writing this blog in the desert after completing just over half that distance, I’m close to finishing the third liter. And it wasn’t even a hot day!
When I finish writing this blog I’m going to make fire and heat up the taco’s I brought from Mexicali.

Mexico! I just got here and I love it already. This country has both a heart and soul. My host in Mexicali taught me some useful Spanish (‘No gringa, no soy Americana, soy Holandesa!’ ‘Pendejo!!’ ‘Puedo a camper aqui?’ ‘Toca la cancion ….’), he introduced me to some great local food, and the most amazing thing, he took me to the Plaza del Mariachi and had one of the groups serenade me.

Me gusta Mexico, me gusta tacos and me ENCANTA los Mariachis!

Pedal Power to the People: Bicycle-Powered Machines Are Changing Guatemala