With sunglasses on my nose, a tank top on and a clear blue sky above me I’m looking out over the white mountains of the Sierra Nevada. Behind those mountains lies Yosemite National Park. All roads crossing the park are closed due to snow. ‘Sierra Nevada‘ is Spanish for ‘snow covered mountain range‘. I just now looked up that translation on the internet, after wondering about it for days. Funny thing is that the name ‘Sierra Nevada’ sounded very ‘tropical’ to me (probably since it’s Spanish and the other ‘Sierra Nevada’s are located in Spain, Venezuela, Colombia, Chili and Argentina) but now turns out to fit exactly what I’m looking at, snow covered mountains.

For New Year’s I was in Nevada city (which is located in California, not in Nevada) as a guest with friends of my bike buddy Shaun. A stormy weather came in and would last for days, strong winds, lots of rain and snow. With a 2151 meter pass on the menu it was quite easy to accept their offer to stay a few extra days. While the one storm came to an end a next one was nearing. We decided to take advantage of the two days in-between the storms to cross over the pass to Truckee. The first day we biked halfway up the big pass to a place called ‘Yuba pass’. As the twilight set in we started looking for a campspot.

On both sides of the road was a 1,5 meter high layer of soft snow and trees. As we were scouting a closed campground for a spot some workers advised us to get out of there as quickly as possible before ‘the boss’ would return. He would not be amused by the fact that we ignored a closed gate (it wasn’t locked) and a very extensive collection of ‘No Trespassing’ signs. We slithered back up to the dark main road over an icy trail. A few kilometers further, where the old road hit the highway, we found a service and refuel station for the snowplows. I asked one of the workers if it’d be okay to put our tent up on their property. Not much later we were cooking dinner on a 70cm thick layer of snow. They gave us the code for the semi-heated workshop where we could use the toilet and ordered us to go inside during the night if we felt like we were gonna freeze to death. Even though the temperature dropped to about -15C that night (so I heard afterwards) I was warm enough in my clothes in my sleeping bag.

The next day we reached the town of Truckee via Donner pass, where our host welcomed us with the offer to sit out the next storm at their place. Newspapers, radio, television, ‘the people’, alarming warnings came in from every corner for the ‘worst flooding since 60 years’. People were stocking up on food in the supermarkets, schools closed and appointments were cancelled. The fear of the people was fed as to be expected from the American media. Armageddon is here!

A day of rain a day of substantial snowfall followed. It must’ve brought down some trees, cause the electricity went out several times. I had to cancel the plan to bike via Lake Tahoe, since even the ski-resorts were closing down due to the heavy snowfall, snowed in ski-lifts and closed down roads. We accepted the offer of a ride to Reno to avoid Lake Tahoe. Tired of rest days we happily took advantage of the situation to visit the indoor climbing gym there. What a great feeling to use my full body again. I was happy to find my arms didn’t lose too much power, though I can’t say the same for my fingers.

Considering the world still hadn’t perished yet we left Reno to head south the next morning. Maybe it would’ve been ‘wise’ to sit out the weather front one or two more days, but I was done sitting still. We left Reno in a weak winter sun but within no-time we pedaled head first into ice-cold rain, snow and ferocious headwinds. And still, still, it felt good to be back on the bike. We reached our destination in the dark. Even if it had still been light, we wouldn’t have been able to keep going as the road beyond Carson city was closed down due to a ‘wall of snow’.

The next morning we left in the snow, knowing the road had been reopened overnight. We expected to get one more day of biking in before we had to take another day off to sit out a snowstorm. As we didn’t have a place to stay and camping in the village-park in Walker was our only good option, I decided to email a Baptist church in Walker, about 75km down the road. I got a reply from the Pastor that same night. We were very welcome to come over and stay there. As we arrived he didn’t bring us to the church but welcomed us into his home. 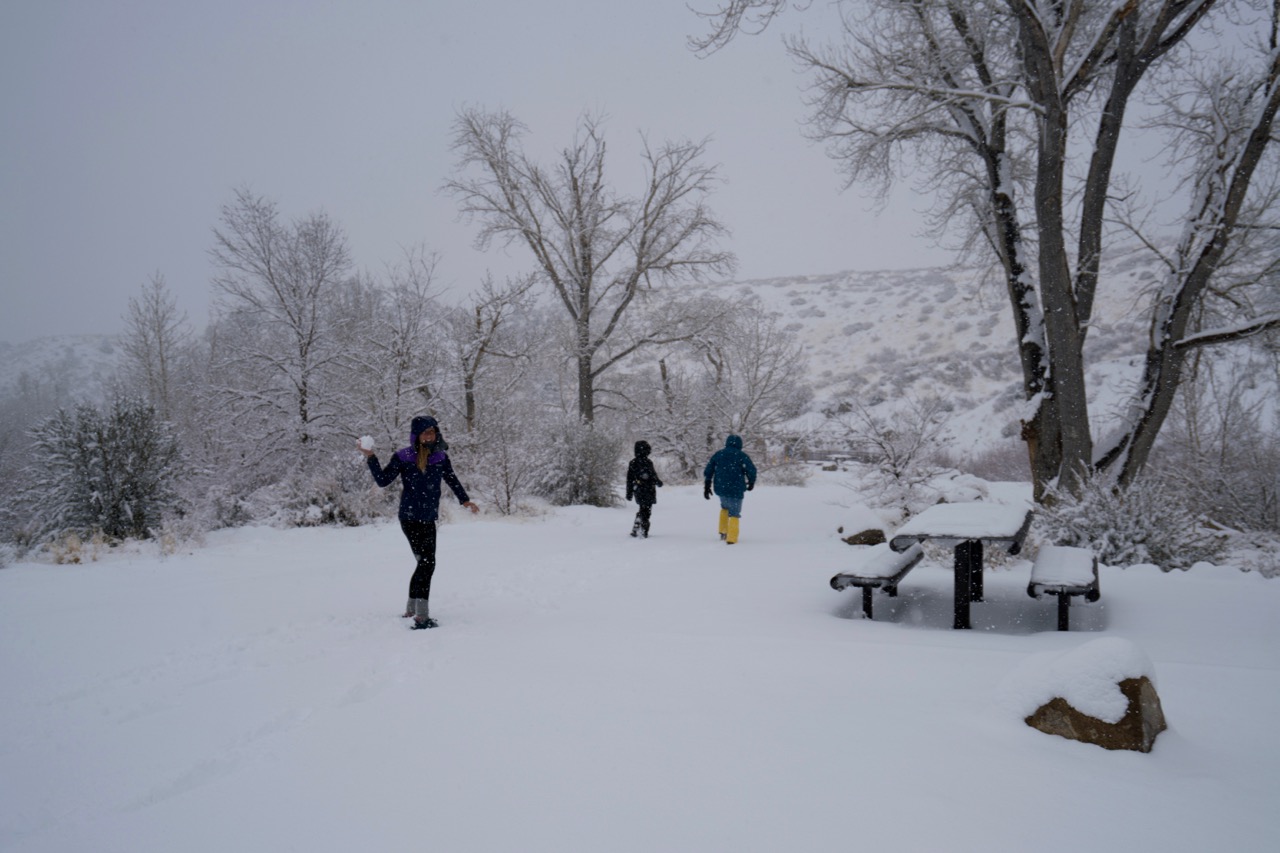 After a day off in Walker, where I had an interesting conversation about religion (Baptism) with the Pastor, made snowicecream with his wife Ruth and went for a walk in the snow, we took the offer of the Pastor to drive us a ways up the road in his pickup truck to skip a hazardous stretch of road. The landscape we drove through was magical and the only thing that made me appreciate to be in a car instead of on my bike was the shiny white slippery road surface and lack of shoulder. The bikeride that afternoon from Mammoth Lakes to Bishop was incredibly beautiful.

And here I am in Bishop in the sun! Yesterday’s snow and the snow I see at the mountains from here, might be the last snow I’ll see for quite a while. Unless there’s some snow on the last mountain pass on the way to Death Valley. Despite the great people I met and the beautiful days of biking my battery has been nearly empty this last few weeks. I thought I’d be able to recharge it during the many rest days, with warmth, pleasant company, tasty food and free time. But every night around 19:00 my eyelids got heavy and I would excuse myself and call it an early night to get into bed to for another restless night of half-sleep.

I turned cranky and emotional. After a day on the bike I’d look forward to a rest day and after a rest day I’d look forward to….I didn’t know what… It seemed like my battery was dead both physically and mentally. And for physical recharge I needed rest days but for mental recharge I needed to be on the bike. And so I kept on limping. Maybe you wonder how it’s possible to feel low while cycling around the world. Many people call what I do ‘Living the dream‘. I wondered the same.. Where did all the ‘power’ go? What drained my battery? To many new impressions? Too much socializing? Physical exertion? To little sleep? Too much away from ‘home’? Or now I have company, to little alone time? I tried to put my finger on it, but I haven’t quite figured it out yet. 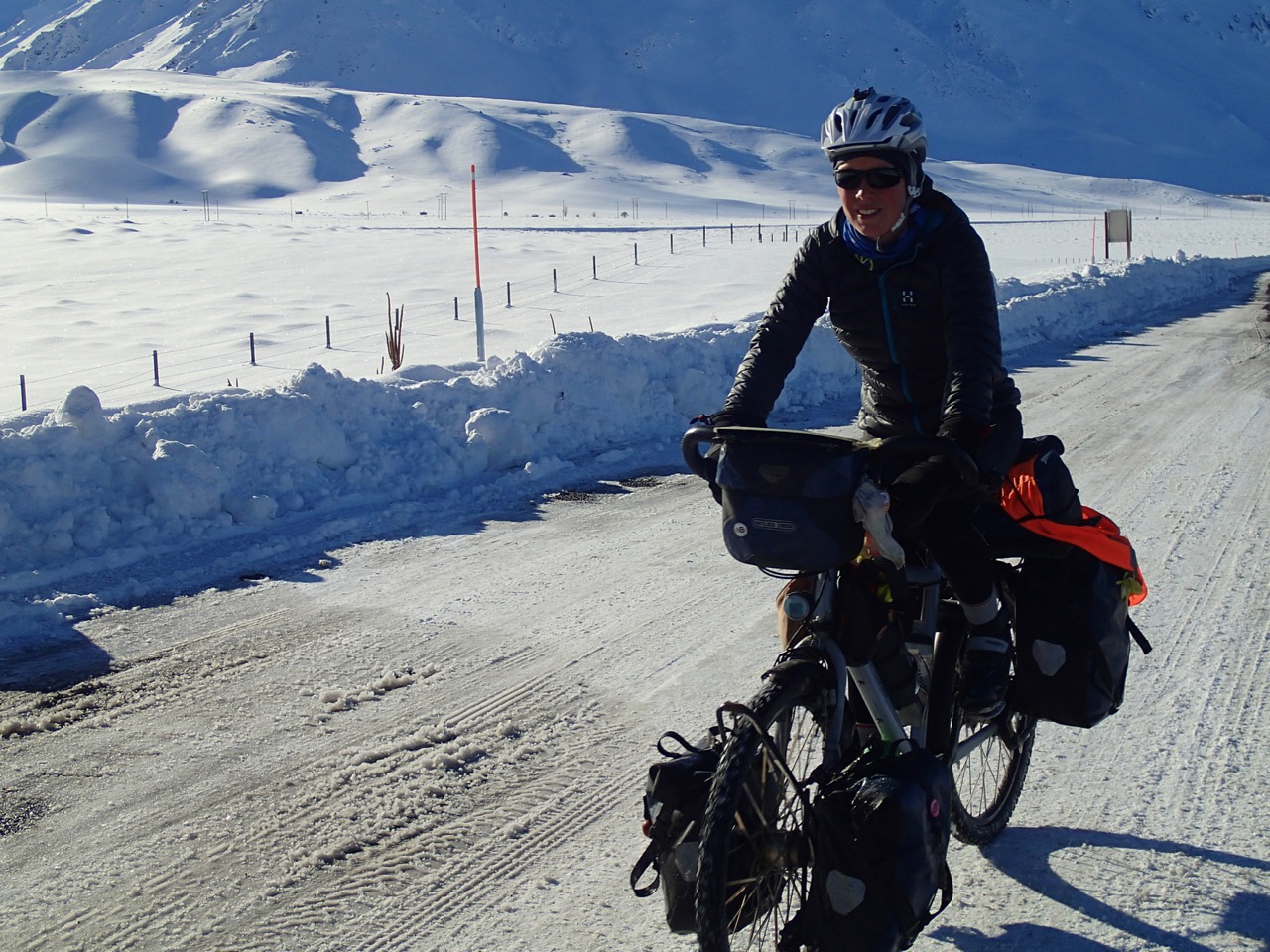 Even though I can really enjoy to push through rain and snow, the sun makes me feel good and gives me energy. The open spaces in the landscape create space in my head.

The first time I cycled in a desert-like-area was in Russia, and I was hooked immediately. The stretched out empty landscape, it fits me. Since Reno I’ve been riding in steppe, the mountains that surround me are barren and raw. I’m looking forward to reaching the desert of Death Valley. The driest place in the United States.

I expect that my battery will recharge again in the upcoming weeks. Here’s the plan: more camping (cause I love it), big empty landscapes, sun and Death Valley, Joshua Tree, the Salton Sea and Mexico!

A pretty damn awesome itinerary, if you ask me..