About 50 meters before the border was a nice viewing point. I just noticed a sign saying the border closes […]

About 50 meters before the border was a nice viewing point. I just noticed a sign saying the border closes at 9pm instead of 6pm as remembered to have read somewhere. So I would be fine stopping here even at 5:50pm and look back on Alaska before I traded it for Canada. More than 2 months, I’ve never stayed that long in a country before.

The vast wilderness from the Arctic coast all the way to Anchorage that overwhelmed and scared me as I arrived by airplane, I defied by bicycle.

Several roads I’ve even travelled twice. Some routes were breathtakingly beautiful and epic, others even boring at times. In the cities, Anchorage and Fairbanks, I felt lost and out of place surrounded by the many big cars, the fastfood restaurants, the enormous supermarkets, strong American accents, homeless people, drunk native people, loud churches and fat Americans. But towns like Glennallen, Delta Junction and Tok, consisting of not much more than a few houses, a supermarket, library, post office, gas station etc serving the spread out community in the area, made pleasant jaunts back into civilization.

How different it is to cycle here than in (eastern) Europe or Asia. Since everybody speaks English there’s no language barrier and I’m socially outlawed. There for everybody to address and you can be sure that is taken advantage of. Sometimes I can hardly take two bites of my lunch or type a full sentence because people keep me talking.

The question ‘How many miles?’ that’s being asked at every occasion and yelled at me from car windows has started to annoy me big time. ‘WHAT DOES IT MATTER?!’ I’d like to yell back at times. ‘How many miles a day?’ As if my answer really matters. As if those grown-together-with-their-driver-seat-Americans have any idea what riding 40 or 80 miles on a heavy loaded bicycle means. General, fast (dis)interest. They want something ‘quick and fast’ without having to break or think and quantitative and competitive questions are obviously at the tip of the tongue. ‘The more the better’ seems to apply to pretty much anything.

But OF COURSE this medal also has a shiny side!I’ve met some amazing people here. People with genuine interest whose great hospitality and helpfulness have pleasantly surprised me! After some very nice days with a hospitable and interesting community in Fairbanks I biked to Tok, a junction town from where two different roads lead to Canada. I was going to be a guest with a 70 year old man named Chip. He would fly out to his camp the next morning and asked me if I was interested to take a few days ‘off’ and come along. A camp in wilderness, only to be reached by airplane, my own cabin, a kitchen, sauna and even (satellite) Wi-Fi. That was an offer I impossible to resist.

The camp is only a few km from the Canadian border. Chip, who is not actively mining anymore, now services the neighboring camp with material, repairs and advice. He has geologists over to check out the rock every now and then and just enjoys his time out there in the wilderness. He took me out on a ride on the four-wheeler to the mining camp and a mountaintop in Canada (yes, illegally crossing the border) and we picked blueberries, shot Ptarmigans, plucked, cooked and ate them, split wood and I spend a lot of time reading and writing. 5 days and nights gone from civilization, even the idea of ‘daily life’ going on somewhere out there became hard to comprehend. The only thing that reminded me daily of the big supermarkets, factories and milliards of working people out there was the prepacked supermarket food that was stocked in the kitchen. No matter how pure and pristine it felt up there I couldn’t fool myself. Almost everything out there originated from ‘modern civilization’. To really ban out civilization and welfare you have much longer ways to go.

I very much enjoyed the days in simplicity and peace, but after a few days my legs started to look forward to getting back on the bicycle. I had one last ‘detour’ planned, the Tok cut-off. A road in the exact opposite direction from where I’d had to go to get to Canada. This road was supposedly beautiful and at the other end of it I would meet up with two Warmshowers hosts I’d stayed with before.

This far away from family and friends, both physically and mentally, the contact with people I meet on the road becomes of great value. They only know me as the person I am here and now, a Hera that I let manifest as best as I can through my blogs, but only they meet face to face. Simply because other parts of my personality get activated when I’m on the road. To not feel lonely, you don’t just have to see other people around you but all the more be seen by other people. And that’s why it was so nice to meet up again with my host from Knik river, with whom I can talk for hours and hours about stuff that actually matters (to me).. Like drinking from a energizing and inspirational source and attempt to store a few liters like a camel to last till the next oasis.

Riding the Tok cut-off was wonderful indeed. Thanks to the tailwinds and leaving a big part of my luggage in Tok I was flying down the road and biked the 230km in two instead of three days. The first night I camped at the Copper river, where the moose were trampling around my tent in the evening and morning and crossing the fast streaming river. The second night I camp hidden behind the library in Glennallen. Before closing I thoroughly washed myself in the restrooms and later the evening I got in my sleeping bag all clean and with Wi-Fi. Every day and night are different when I’m on the road. I zigzag on my own track through and around the ‘daily life’ and every now and then go with its flow.

After having marked almost the full road system of Alaska with my tires it was time to really REALLY head for Canada. Maybe more because of the dropping temperatures than because I was ‘done’ with Alaska. I haven’t explored the south yet. And what about all the new possibilities and routes to bike when the rivers freeze and snow covers the land? I guess I’ll have to come back for that some other time.

After getting a ride back to Tok I got back on my bicycle, the Taylor highway, on my way to the Top of the World highway and the most northern border crossing to Canada. I was only 30km in when a pickup truck slowed down next to me. A man and his two teenage daughters offered me some cookies and a place for the night, if I would make it to ‘mile 58’ that day. No way! That would make it a 120km day ride and I got only started at noon. ‘Well, we can just put the bike in the truck and get you over a few hills?’ Easy peasy. About 30km down the road they dropped me and at the end of the afternoon I reached ‘mile 58’. A windy gravel road led to Jims ‘summer’cabin where he was staying with his daughters Maddy and Faith.

I was spoiled with a great meal and ice for dessert, the girls taught me how to play poker and Jim asked questions about my travels being very interested and admiring. He called me something which seemed very unusual to me, and to many I guess. He called me a ‘role model’ for his daughters. I think that is just awesome and not a lot of fathers around the world would (dare to) agree with him.

Thankful for this great experience and their hospitality I set off towards Chicken the next day. Chicken is a mining town with only 7 registered citizens (I wonder how citizens of Chicken are called?!).

From Chicken to the border, 75km up the road, there was ‘nothing’ I was told. The full road from Tok to Dawson city was a collection of ups and downs and ups and downs with a total of 4500 meters to climb over a length of 300km. I wouldn’t call that ‘nothing’… 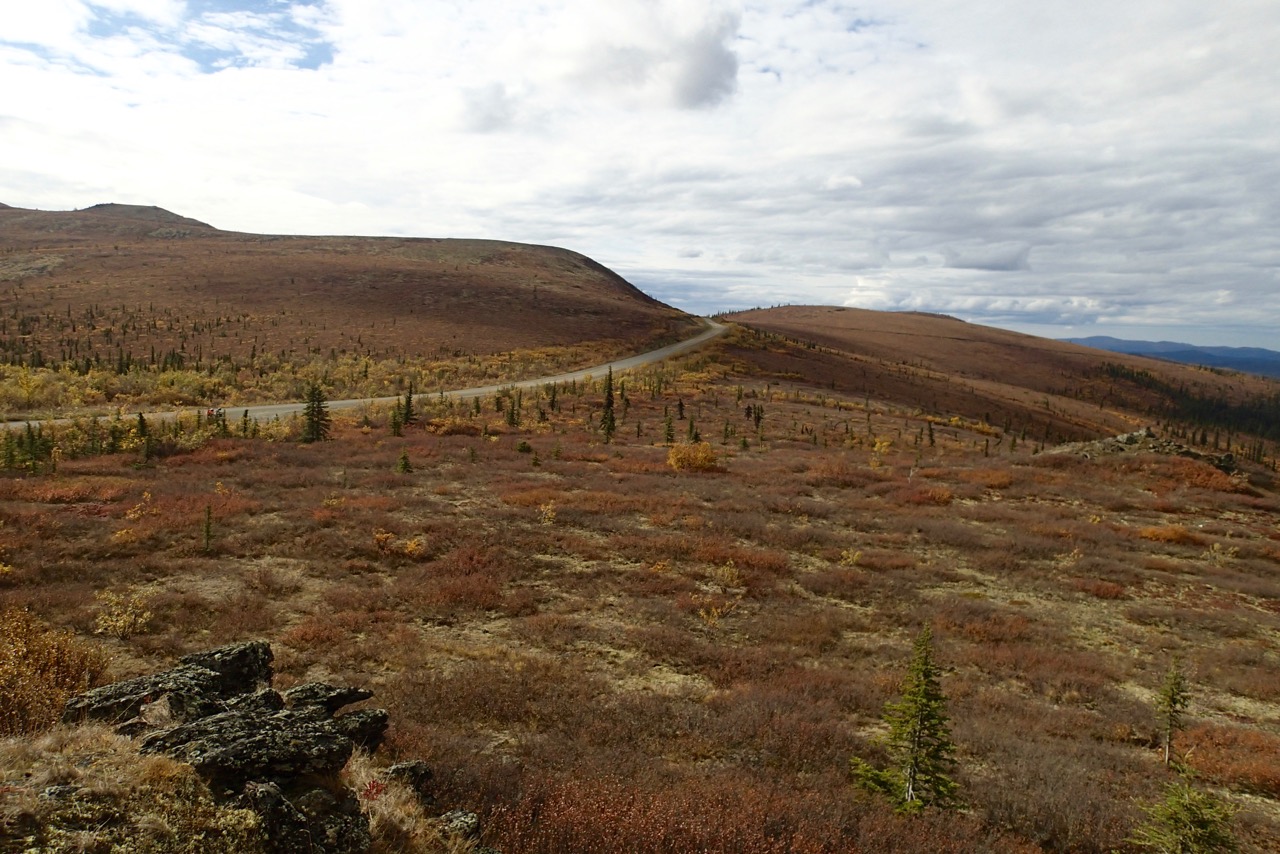 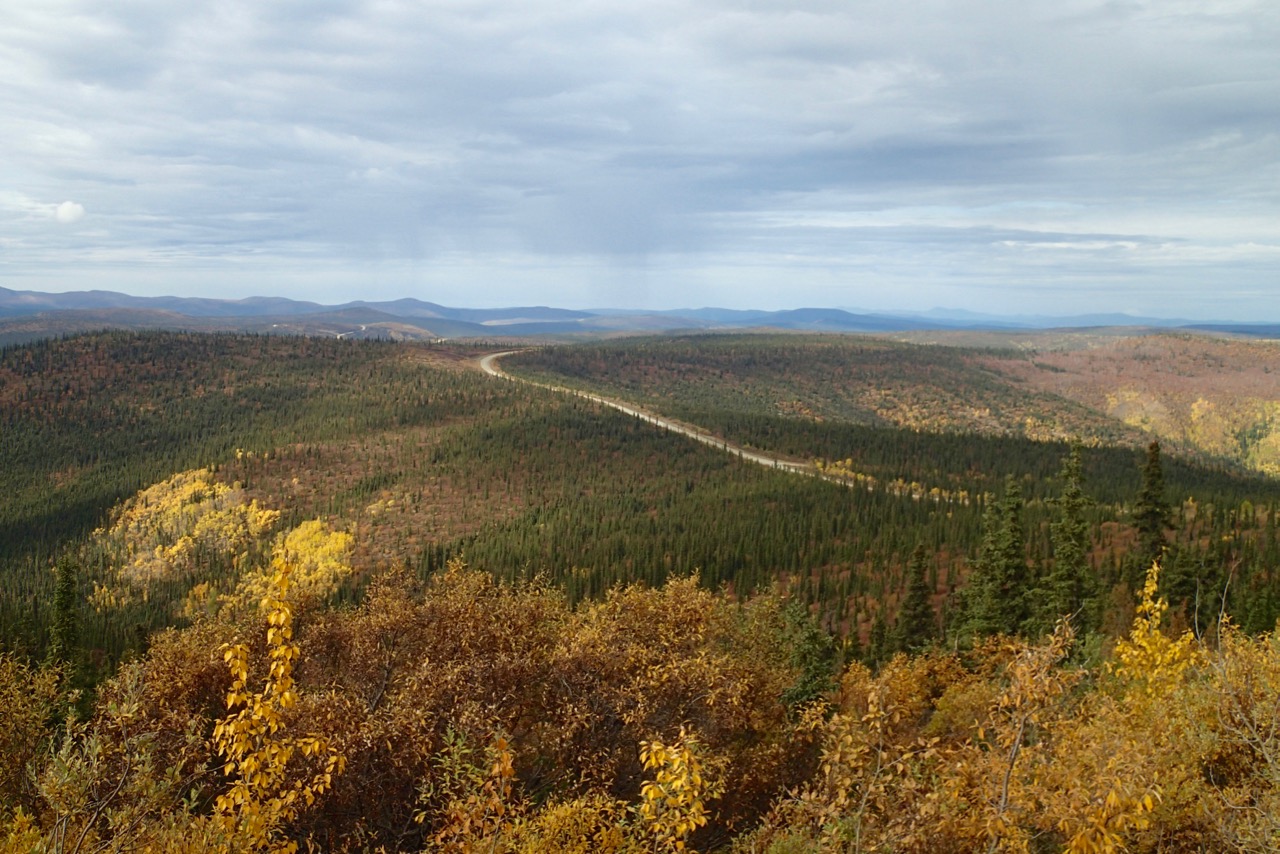 I arrived at the border a little after 18:00, I was surprised not having to show my passport to the American border guards. Nobody checked if I didn’t overstay my visa or if I hadn’t become a ‘wanted woman’ in the meantime. So much hassle to go through to enter the country and I don’t even get a stamp on departure! The Canadian border guard welcomed me with a smile and wasn’t keen enough to detect my little lie ‘No, I don’t carry any bear spray’. COME ON! That spray cost me $45 and I guess I still have most of the bears coming up! Not even mentioning possible scary men! ‘I’m gonna hold on to my bear spray all the way down to Argentina!’ is what I’m thinking.

A few kilometers after the border I pitched my tent, on the ‘Top of the World’. What a view! Yellow, orange, red and bits of green and brown as far as my eyes could see. The border crossing closes from 9pm to 8am and with the first bits of civilization in both Alaska and Canada about 100km away from me it made a beautiful quiet and dark night with just me and the wild. The realization that I was really leaving Alaska behind hit me for a moment. Even though I’d gone through some love-hate issues with the state, it impressed me deeply. Sometimes I wanted to leave, now I was ‘homesick’ already. It’s a fine fine line.. For the first time I listened to some music from my laptop while camping in the wilderness (a strange but nice combination) and watched how the sunset colored the clouds pink and red. 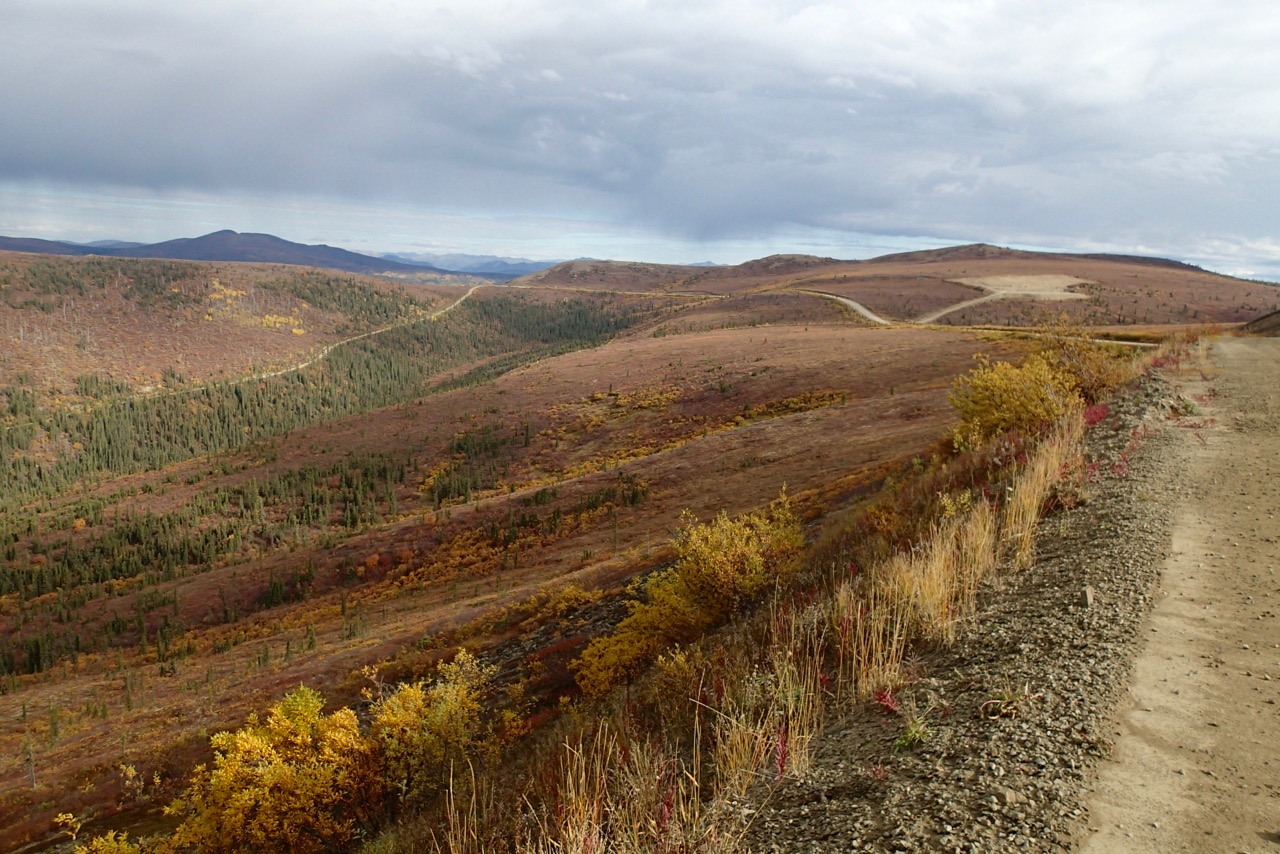 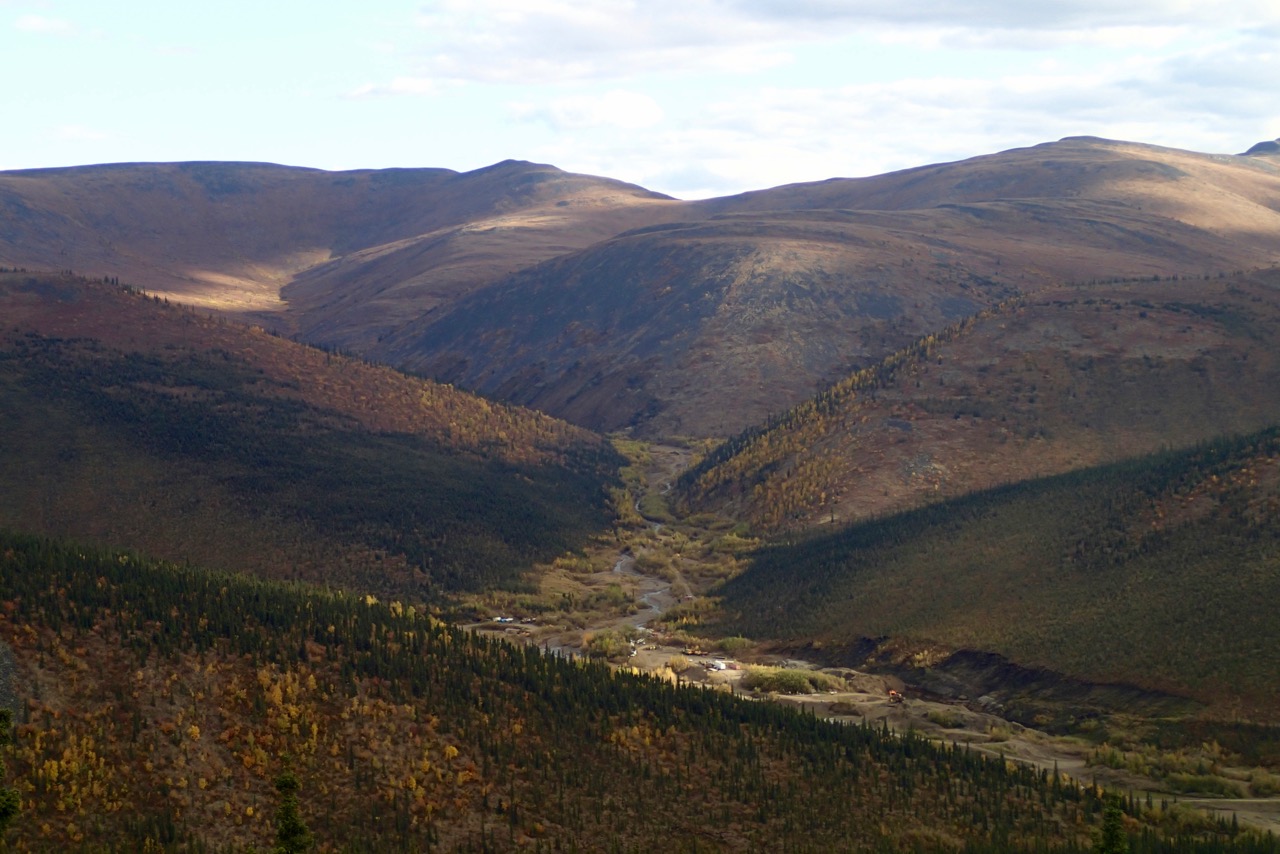 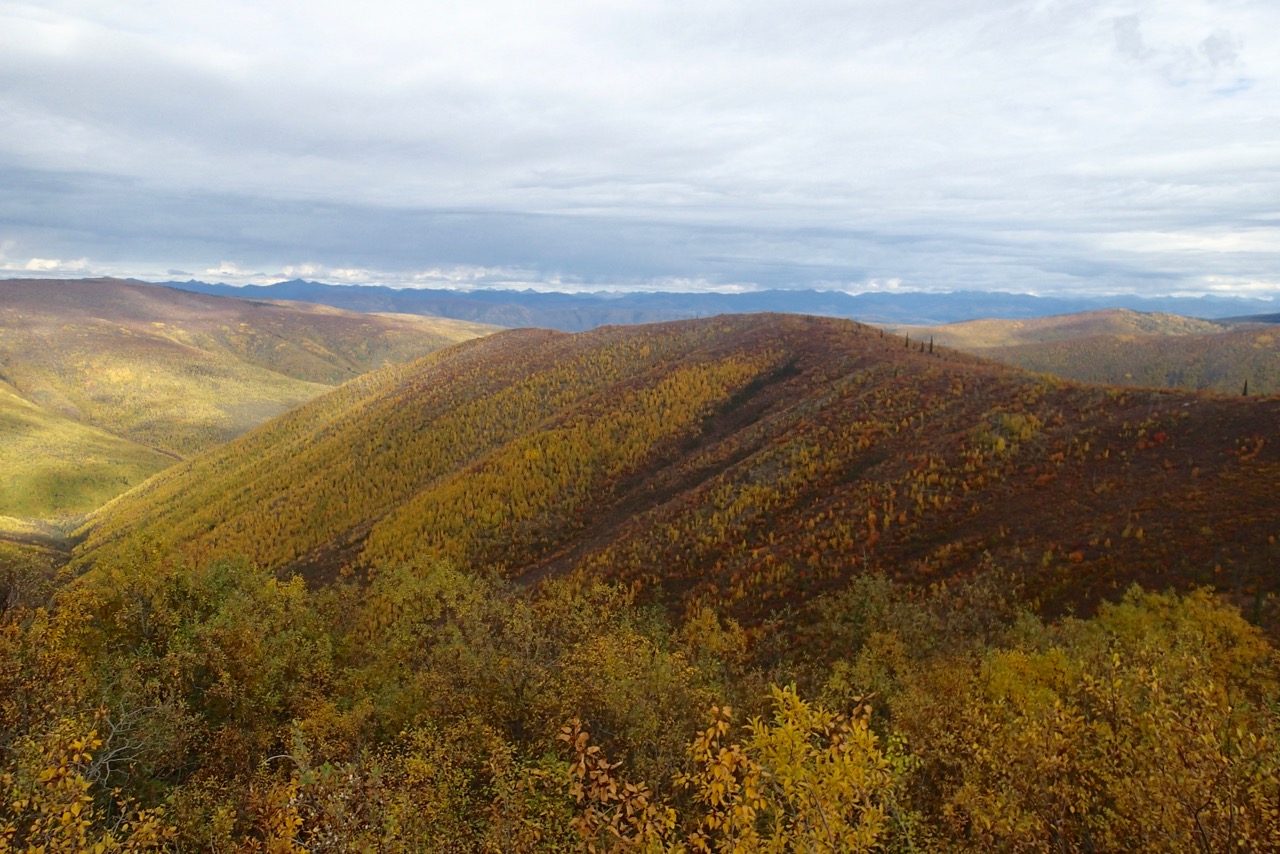 The next morning, I was aiming for Dawson City, 100km up and down the road. A lot, but doable. One day earlier than planned I raced down the 18km long descent into Dawson City. THE miningtown of the north. A touristic attraction but still authentic. It looks like a movie set but at the same time you can feel that there’s a community living here and there are households and real lives going on behind the pretty colorful facades.

I couldn’t reach my Warmshowershost and while I was just hanging out at the Tourist Information an older couple invited me for dinner at ‘Klondike Kate’. The Tourist Information attendant gave me a coin for the showers at a ridiculously expensive campsite (was I smelly?). And after a great meal and a short but hot shower I felt reborn. Now all I needed was a place for the night… 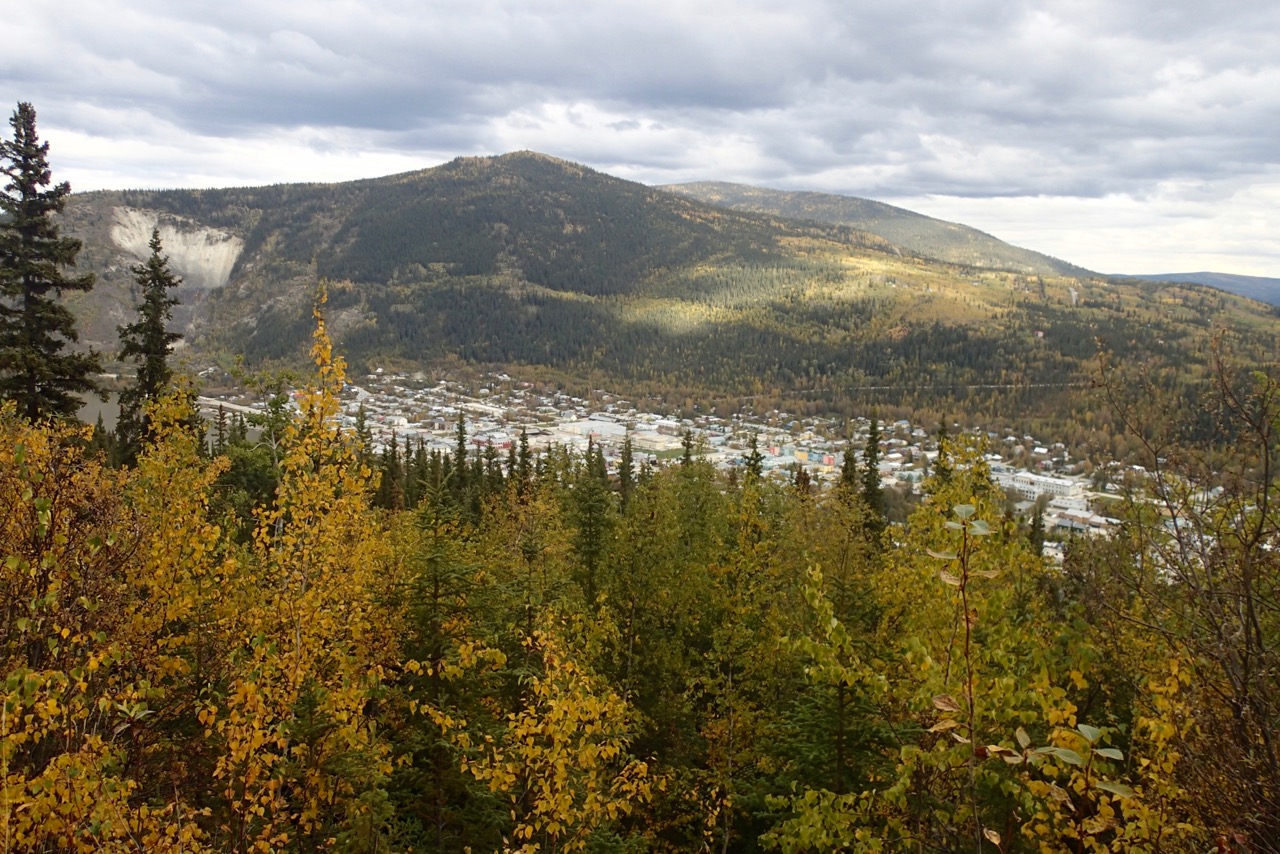 The ‘campsites’ in Dawson City turned out to be some kind of ‘RV-dumps’. Cheerless gravel areas with few RV’s parked. I decided to ride out of town and found a nice little spot for my tent at Bonanza creek.

The next day I reached my host. A man who runs a mining operation and organizes tours and accommodation. He let me stay in one of the cabins.

A new adventure. A new country the lays spread out at my wheels. I decided to resist the temptation to ride up the Dempster highway in the north. No more ‘detours’. I’m heading south! Night frost is here already, the trees are changing colors fast and will soon let go of their leaves, the first snow will soon fall. South!

Trying to stay ahead of winter and keeping up with fall.

Off to Whitehorse, off to Jasper and the Icefield Parkway. Off to new adventures!