Getting ready to write my blog, sitting at my laptop at the Denali National Park entrance, all I can think […]

Getting ready to write my blog, sitting at my laptop at the Denali National Park entrance, all I can think is; ‘there is so much to tell.’

The more impressions you gain and the more new things you experience the longer the timeperiod seems that went by. I remember reading that during my former biketrip in the great book ‘Moonwalking with Einstein’ by Joshua Foer. I can’t say these last two weeks feel like a month but it’s a fact that, as I’m ‘longer’ in this trip, time loses its familiar meaning.

There’s so much to tell. Even though I’m only about 200km away from where I wrote my last blog, at a riverside along the Denali highway.

Here’s a start. The Denali highway is not part of Denali National Park nor Denali State Park. To make things difficult, Alaska has; National Parks and State Parks, State Recreation Areas and State Recreation Sites. I cannot tell the difference. I only pay interest to the sign ‘NO CAMPING’ that provides me with all the information I need know about what is and what isn’t allowed in that Park, Area or on that Site.

Americans love signs. The bigger the better! Especially ‘PRIVATE PROPERTY!’, ‘NO TRESPASSING’, ‘GET OUTTA HERE’ and ‘IF YOU STEP ON MY PROPERTY I WILL SHOOT YOU’ are popular. I’ve been told that they don’t mean to come across as unfriendly, but it’s just done to prevent thievery. Though I’d be surprised to see the average American thieve scratch his head after reading such a sign, turn around and try his luck at the neighbor’s house (with no sign).

Along the Denali Highway there were little signs. In fact, there was little of anything, except trees, bears and wildlife in general.

One night I was camping at a lodge. As a trade for helping with the dishes they let me camp, shower and join the ‘all you can eat’ breakfast.

I got lucky, the owners were watching Tour de France (without understanding the game)! I explained them how the race works and got to witness the legendary moment that the man in yellow; Christopher Froome, after a crash that broke his bike, started running up Mont Ventoux.

At the American sportschannel they showed images of the crash over and over and over, accompanied by a hysterical commentator and action movie soundtrack. 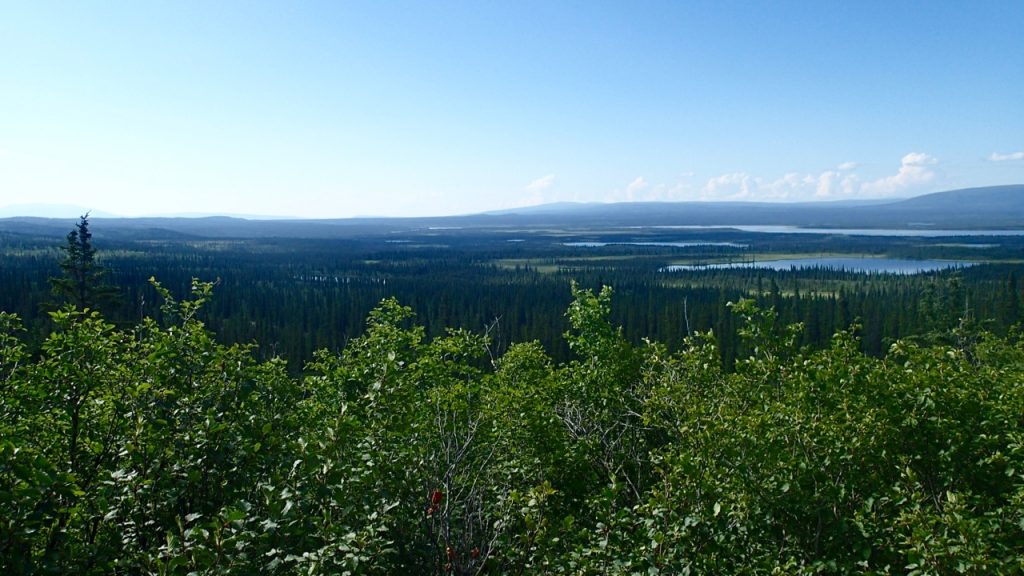 Back to the bike, my bike! A lot stronger than Froome’s, evidently.

The Denali highway was a highlight. What a delight to ride such a quiet gravelroad through the wilderness. Passed occasionally by a pickuptruck or motorhome, but in no comparison to the main roads here.

On my last night at the Denali I camped on my own in the wilderness for the first time here. Aware of the amount of bears that inhabit that area, I felt a little nervous at the start. But once I’d put up my tent, had dinner, put my food far away from my tent and started a little fire I got surprisingly comfortable. Until I heard a splashing sound coming from the lake nearby, as from a big animal. From my tent I could see a big brown animal going under water and coming back up, but I couldn’t tell what it was. A moose? Or a grizzly bear…? Very carefully I got a little closer till I could reassure myself. A moose! A beautiful big cow moose, snacking on the waterplants in the lake. What a magical image, that big wild animal undisturbed in the middle of the water on an evening in the wilderness.

From the Denali highway I continued my way back south. In Willow I was a guest with a WarmShowers host. A 68 year old woman living alone in a big house with a beautiful view on the mountains. She’s not a cyclist, but her daughter got her to become a WarmShowers host. It’s her first summer hosting and she enjoys having the company and help of some cyclists around the house. Even though she’s 68, has MS and rheumatism arthritis, she’s active all day, working in the garden, taking care of her 14 dogs and mushing! Mushing, a type of sport where you stand on a sled that’s getting pulled by dogs, riding trails. It’s a popular sport in Alaska. People who race often have about 48 dogs. The biggest race is the Iditarod, from Anchorage to Nome. 1609km without support. Every night you have to take of the shoes of about 64 dog paws, massage all those paws, melt snow to give the dogs water and prepare their food, prepare your own food, sleep a few hours, put about 64 shoes back on and start mushing again. All this far below 0 over endless snowfields. They do call it ‘The Last Great Race on Earth’ for a reason.

After a beautiful ride on the Old Glenn highway I took a left on the dead end road along the Knik River. It looked like a nice ride and further down that road lives another WarmShowers host. After enjoying my solitude in Iceland, not longing for or feeling ready to meet new people, here in Alaska I do enjoy to be around people again and share stories.

It turned out I arrived at the perfect place to do so. Here at Knik River I met a bicycle fanatic named Cody with whom I could have endless conversations about cycling, traveling, society, America, religion and psychology. Sometimes you don’t know what you miss until it’s there again. Talking to a friend. In these three days I wrote four letters, edited the video to go with this blog, did some bike maintenance, laughed, talked and had delicious food.

After those days my (apparently) dying battery was fully recharged.

Off to the airport in Anchorage! Indeed, right where I started. Not to fly out, but to pick someone up. Company!

After giving it lots of thought, doubt and consideration (I’m very attached to my status as a SOLO cyclist) I gave my friend Joost ‘thumbs up’ to book a ticket to Alaska to join me for some weeks. He arrived in Anchorage accompanied by a bright Dutch-orange Santos traveler. He’s an all-round sportsguy, but he’s new to biketravel.

After two days in Anchorage we got on our bikes heading for Hatcher pass. A pass famous for its beauty and infamous for its steep ascent, at least that’s what I’d heard. Either Alaskans have legs as weak as the coffee they make, or mine are as strong as they think we make our coffee. However, slow as a snail, but steady, I climbed the pass without a problem. What a delight! I love climbing! I may be a slow climber but I reach the top, I (always) reach the top.

Tired and hungry after a 106km ride we arrived (again) at Elaine’s, the woman with the mountainview and the sleddogs.

From there we pedaled in three rainy days to Denali National Park, where we pitched out tent at the campsite near the parkentrance and that’s where we are now. Time for a day off the bike, time for a blog. Tomorrow, when our legs are rested, we’ll go for a hike. The day after that we’ll get back on our bikes and ride the parkroad. Well, that is if the mudslide that came down yesterday and is blocking the road now gets cleared out. In contrast to many eastern European and Asian countries where I’ve cycled in America there’s the rule that; ‘RULES ARE RULES’ and if they decide we cannot cross that area by bike, we cannot cross that area by bike. Even though in reality it might not be much harder than pushing your bike for 30 meters through a thin layer of mud. Rules are rules! And seen the frequency and ease with which people sue each other here, throw eachother in jail or, as they say, ‘put a bullet’ in each others ‘head’, we’ll be good and play by the(ir) rules.

So, no exciting cliffhanger. Rather than putting some Americans to the test we’ll spend our possible extra day(s) going for a walk, making a fire, picking blueberries, toasting bread with cheese on it, roasting bears and enjoying the (now) dry but chilly weather.

Oh, and here’s a picture of the mudslide…

10 Best Cycling Trips for 2016: Which One Is Your Favourite?