ŠKODA’s next all-electric flagship, the brand-new ENYAQ iV, was officially introduced to the world about an hour ago today. Given the car manufacturer’s Czech heritage, the ENYAQ iV’s global debut took place in the capital of the Czech Republic, Prague, at 7 PM CET. To put a spin and shift of pace on the standard glamorous car-reveal event, already tomorrow, ENYAQ iV will appear to thousands of spectators at the launch of stage 5 of the 2020 Tour de France in the role of the race director’s ‘mobile control centre’.

ŠKODA’s history has been intertwined with cycling since the beginning when the two founding fathers, Mr Laurin and Mr Klement, built their first bicycle in a little workshop in December 1895. Always striving to support activities and community initiatives on two wheels, ŠKODA eventually became the official sponsor of major cycling events across the globe, including the Tour de France in 2004 and, subsequently, the Tour’s Green Jersey since 2015. So it’s only natural, given ŠKODA’s history, that the first larger audience witnessing ENYAQ iV in action will be the Tour de France fans.

The leading car no. 1, always found at the launch of each stage and the tip of the peloton, is one of the unmistakable visual symbols of the greatest road bicycle race of all times. With an eye-catching bright red paint job, the characteristic yellow cap visor-like attachment above the windscreen and custom Le Tour and ŠKODA decals, it chauffeurs around none other than A.S.O.’s and Tour de France’s cycling director Christian Prudhomme. As he himself said of the role of the leading car in the past: “ŠKODA is an essential partner for the Tour de France as well as for the races that we organise. During the Tour de France, the red number 1 ŠKODA is more than just a car, it is a control tower, an office, and a valued and trusted friend. We are thrilled to extend this cooperation with an efficient, reliable and dynamic partner.” ŠKODA has been the vehicle of choice for the Tour director’s car for many consecutive years but it’s the first time the ever-present SUPERB model stepped down from the throne to be replaced by the brand new ENYAQ iV. All in all, there will be three ENYAQ iV models present at the Tour this year – one as the abovementioned director’s car and two others, also donning the same shade of red, with Mr Prudhomme’s race marshals on board. 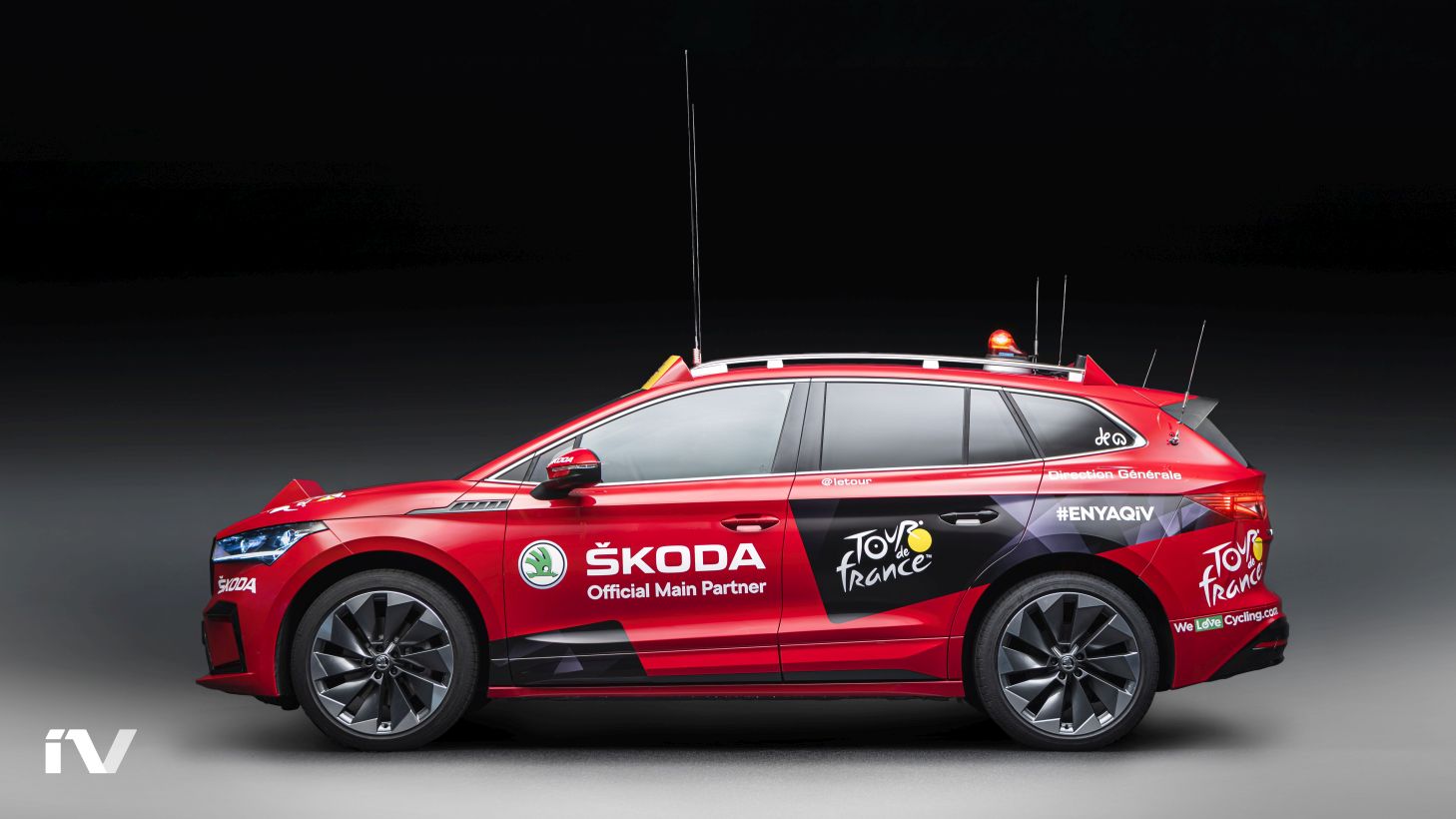 Like its predecessors, the ENYAQ iV leading car has been specially kitted for this unique occasion. It features a sizeable panoramic glass roof, used by Mr Prudhomme to watch over the race and wave a starting flag at ‘Kilometre Zero’, six antennas, special horns, a refrigerator and a state-of-the-art communication and command centre with a two-way radio station in the rear so the director can receive information and give orders to his race marshals. All support cars, riders and even fans rely on the leading car to ensure the spectacle of the Tour to unfold safely, justly and smoothly. The major difference is that the ENYAQ iV model uses the modular electrification toolkit (MEB), making it ŠKODA’s second fully electrified vehicle after a solid line of plug-in hybrids.

ENYAQ iV will be available in several different versions, with the battery pack ranging from 55 kWh to 82 kWh and a single charge will take you up to 510 km. The top-of-the-line models will feature, among others, state-of-the-art components and accessories including 20“ alloy wheels, 13“ dashboard display, rear parking sensors, light and rain sensors, built-in massage program for the driver’s seat, the keyless entry system (KESSY), and a phone box with inductive charging and the all-inclusive peak model will also feature the driver alert function with fatigue detection and an electrically-operated boot with a virtual pedal.

ENYAQ iV will accompany Mr Prudhomme on tomorrow’s 183-kilometre Tour stage from Gap to Privas and also during two other occasions – the individual time trial from Lure to La Planche des Belles and the final 122-kilometre stage including the grand finish at Champs-Élysées as the leading car is the only vehicle allowed to cross the finish line alongside the cyclists.

The ENYAQ iV is part of a fleet of up to 250 vehicles that ŠKODA is providing to the race management during its 17th year as the official main partner of the Tour de France, this year with an emphasis on the topics of sustainability and electric mobility. Thirty vehicles from the fleet in total are ŠKODA iV models with plug-in hybrid or fully electric drive. As they stand for sustainable individual mobility just as the bicycle does, the Tour de France provides a perfect stage to present the vehicles and premiere the brand new ENYAQ iV to an international audience.

Why Are ŠKODA Cars the Backbone of the Tour de France