Throw together a lifelong passion for cycling, tradition, and extraordinary craftsmanship skills and you’ll witness the return of a legend. Vladimír Vidim from Prague breathed life into a 123-year-old model of a bicycle named SLAVIA, made by Laurin & Klement. Before the unique bike should end up on display in a museum, Vladimír wanted to give it a chance to earn its stripes – by racing nothing less than l’Étape, one stage of the Tour de France. After six full months of work and preparations, both the bicycle and Vladimír made it to the finish line. This is their story.

The chase for a legend

The SLAVIA models were the very first bicycles Laurin & Klement started to produce in 1895 and the particular SLAVIA Vladimír Vidim replicated was the brand’s first racing bike, which came after two previous commuter models. The little Laurin & Klement workshop has become, over the course of a century and 25 years, the ŠKODA car manufacturer we know today. Vladimír is a trained locksmith who has created tens of historical bicycle replicas, including a boneshaker, a draisine or a penny-farthing that he used to set a cycling record, which is not his only one. He’s been an active racer his whole life and nowadays he trains the youth of the Dukla cycling club. Once he was having beers with a friend and when the conversation touched upon the subject of resurrecting a SLAVIA, Vladimír decided that just bringing the bike back isn’t enough. “We said to ourselves that if the ŠKODA brand sponsors the Tour de France, it would be great to not only put this legend together but also to ride one stage of the Tour on it.”

A straightforward and feasible plan – in theory. But no one was really surprised that practice started to give Vladimír grief from the very start. An original specimen of the SLAVIA seemed to be something of a unicorn. A few friends and experts were convinced that at least one must be out there somewhere although they’ve never seen it with their own eyes. No museums or private collections seemed to have the coveted racing model, only the commuter version. After intense investigation, Vladimír eventually gave up searching and he decided to build the entire bicycle from scratch and based solely on period photographs, brochures, and other materials from the ŠKODA Museum archives.

The most difficult proved to be estimating the details and angles of the frame from the photos – each expert had a different opinion. Vladimír created nearly the entirety of the bike – he himself put and welded the chromium-molybdenum pipes together, used a lathe to create the wooden handlebars, and made other individual components. The preparation and construction of the bike took him three months, including the time he had a cast on his arm. “For six weeks, I could only use one arm. Luckily, I can control both the lathe and the miller with one hand only,” said Vladimír with admirable matter-of-course attitude. He also added that if the bicycle was destined only for a museum, it would be ready much sooner but he needed this one to take him successfully across the finish line. “I had to re-design the bike so it won’t fall into pieces on the way,” he laughs. In the end, the bike weighs 18 kilogrammes and doesn’t have brakes nor derailleur, just as the original. 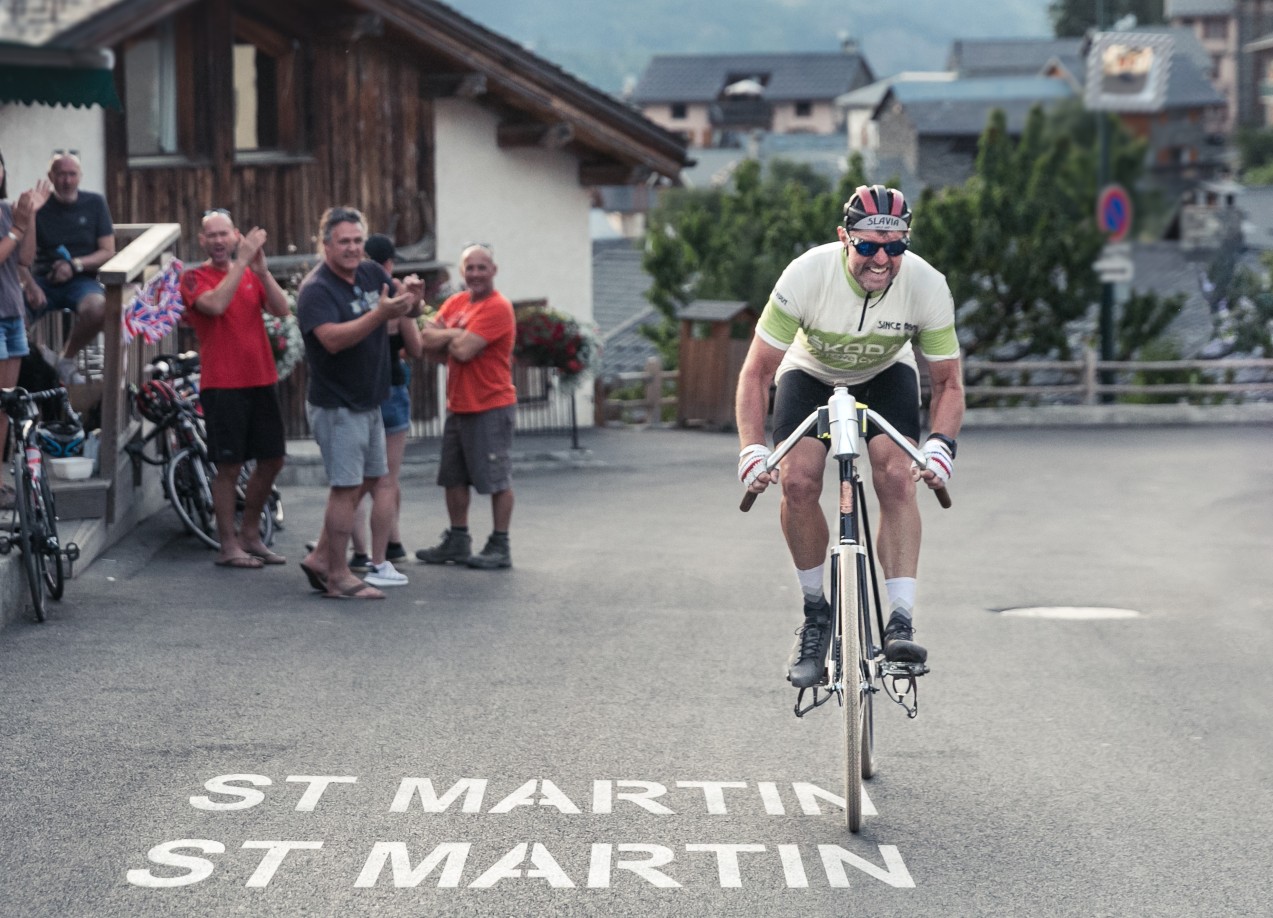 For the race itself, Vladimír equipped himself with clothing, a cycling bottle, and shoes that would match the style of the beginning of the 20th century – the period the Tour de France first took place (1903). Even though his SLAVIA was fully functional and Vladimír absolutely did not underestimate the training, not even he expected to use so much “elbow grease”.

He conquered the 135 kilometres with the total elevation of 4,563 meters and three steep mountainous climbs in 17 hours and 17 minutes but, according to him, he never doubted his performance nor did he consider giving up. What was the cause for concern were the potential technical problems – after all, there are no peaks like that in the Czech Republic to train on – but the SLAVIA handled the whole race without a single malfunction. Vladimír had to walk or run a substantial part of the route – he could only brake by countermovement of the pedals, which was pretty risky. “There was a crisis right on the first downhill. The other racers were passing me by terribly fast so I rather got off the bike and ran alongside it. I didn’t want to endanger them nor myself,” Vladimír explains. He guesstimates that he spent at least 40 km on foot next to his bicycle. So, besides his excellent cycling performance, he incidentally nearly ran an entire marathon in the mountains. 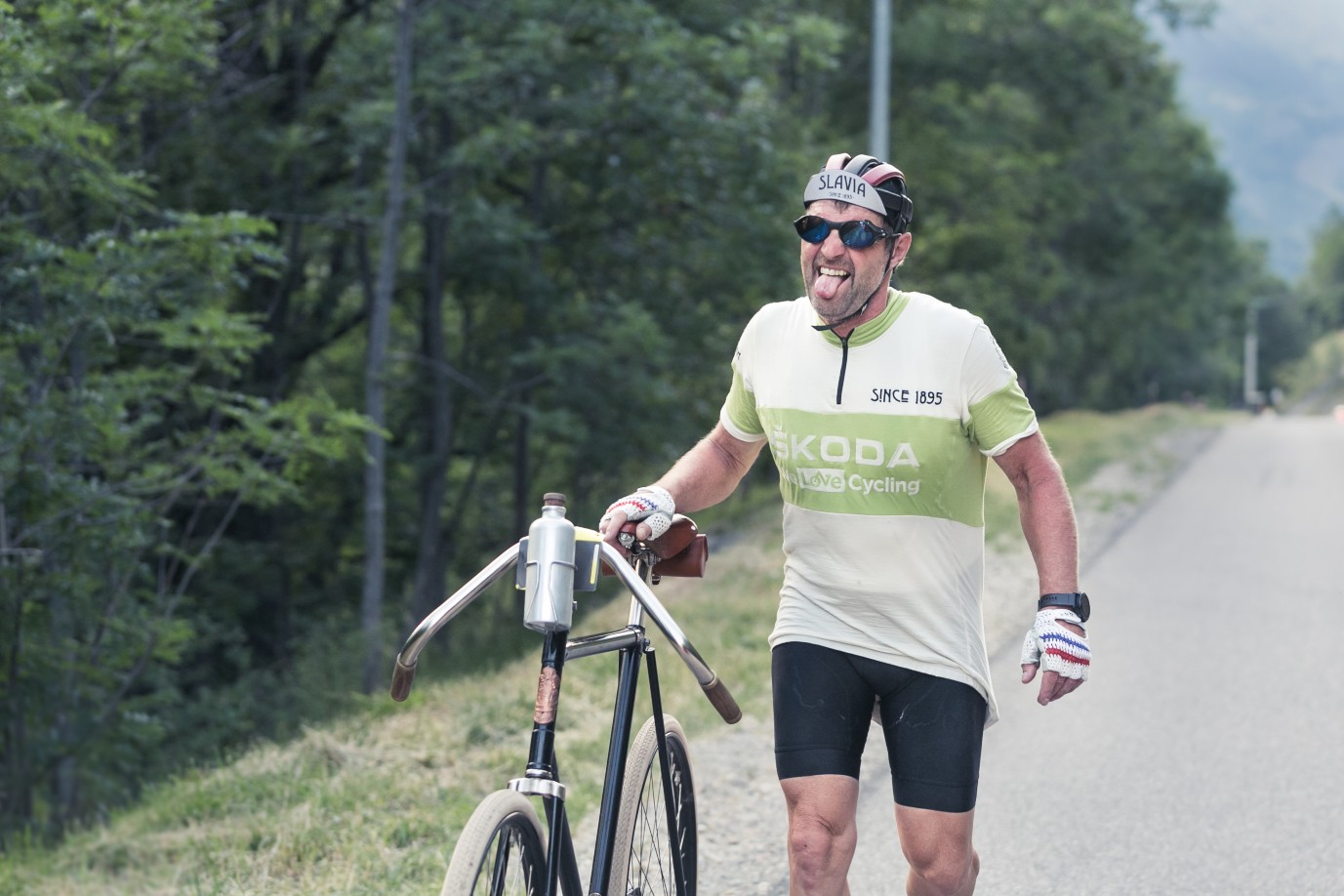 The first impressions after getting off the bicycle were joyous ones. “It was incredible. The SLAVIA bicycle replica had such a huge success! In fact, there wasn’t a single person who wouldn’t show admiration, support or joy. The people were patting my back as if I were a Tour de France rider who just won a stage. That was an enormous motivation,” remembered Vladimír at the summit finish at Val Thorens at 2,365 metres above sea level, roughly 30 minutes after midnight.

Besides running and the expected technical and terrain obstacles, Vladimír had to face other difficulties: “I did the whole route with just one refreshment stop. When I was at the 80th kilometre, we arrived late so the refreshment station was already closed. The organizers didn’t think of the latecomers and had everything packed up. I was saved by an energy bar that another rider dropped earlier and I picked it up as litter. A few hours later, I happily promoted it from litter to a snack and ate it. You know, short supply,” laughs Vladimír.

Finish adrenaline is nice but support is even nicer

All hardships were fully compensated by the friendly atmosphere and the solidarity of other l’Étape participants. Like when he rode through a pass with thousands of cheering fans or when an onlooking Frenchman refilled his water bottle in the wink of an eye. The support of his family was also a major help: his wife and son kept him company on the last night-time section of the race and lit up his way by the headlights of the ŠKODA SUPERB supporting car. “You know, all these ‘human experiences’ are probably more to me than the adrenalin from the race, the finish or the success,” Vladimír adds.

Andy Schleck, a former pro road cyclist, the 2010 Tour de France winner and a current Tour de Luxembourg chairman and a ŠKODA ambassador commented on this incredible feat straight from the sidelines of this year’s Tour: “I have a big respect for [Vladimír] because I could not finish the l’Étape on a bike with one speed and a brake where you have to push the pedals backwards. Very impressive and a really cool story, I love it.”

Even though Vladimír finished last and long after the set limit, which usually means disqualification from the race, the honorary l’Étape medal was still deservedly his because such a heroic, unique, and strong-willed feat just had to make the organizers turn a slightly blind eye to the rules. We wish Vladimír a lot of success in the future and we believe that’s not the last time we heard his name. And in you want to see his now truly legendary SLAVIA, head over to the ŠKODA Muzeum in Mladá Boleslav, the Czech Republic.

New Research: High-Cadence Cycling Has No Benefit for Amateurs

A New Paradigm in Cycling Nutrition – Benefits and Drawbacks