Everybody loves pump tracks. No matter the skills, both kids and pros can enjoy riding on them. They’re neither difficult nor expensive to build. Some building experience may come in handy, though, and so we met professional pump track designer Michal Severa and pumped him for information. Michal is a consultant to the Czech branch of IMBA (ČEMBA) and to this day has over 60 pump tracks under his belt.

In 2004, Aussie Mick Hannah trained on a pump track before winning a race at the Sea Otter Classic in Laguna Seca, California. American DH rider Steve Wentz was amazed and built a similar track when he came back home to Boulder, Colorado, inspiring other riders across North America. The phenomenon of pump tracks was born, and they spread all over the world faster than wind. Everybody wanted to have a pump track somewhere near their jumping spot. What makes the bumpy tracks so popular? Instead of pedalling, riders generate momentum by lifting and pushing down their body on the bike in a movement that resembles pumping. Once you manage to control the flow on a pump track, your technical skills will grow wherever you ride. You can ride, you can jump and have lots of fun on a relatively small spot. It’s simply tempting! 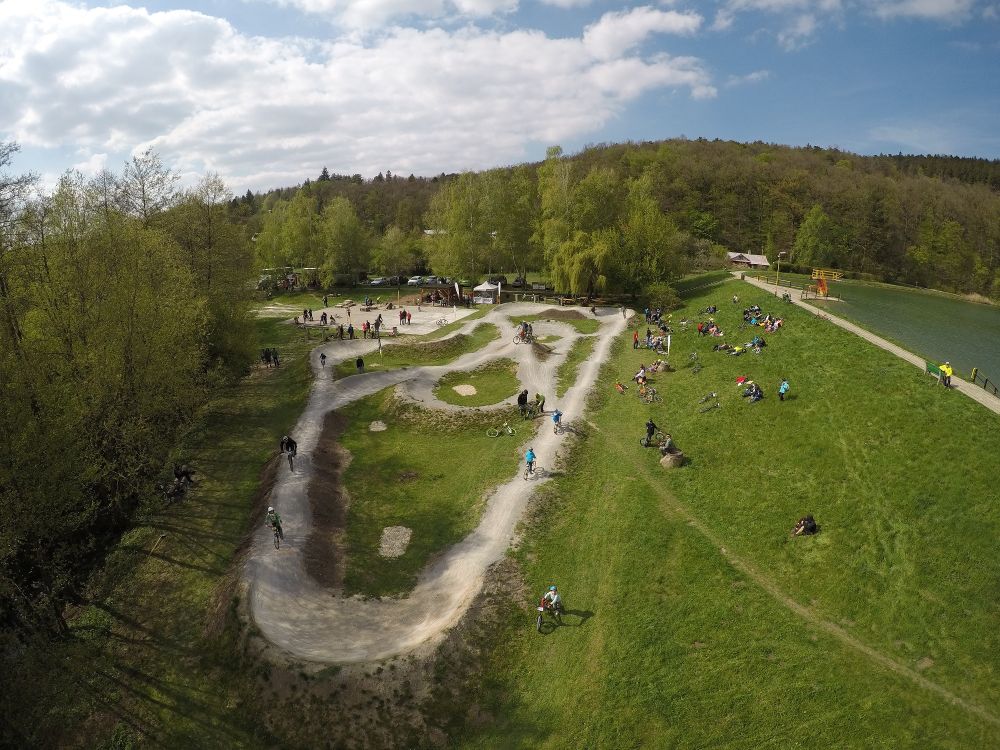 Hey, mom, I want to have one in the yard!

With just a few turns, you can squeeze a pump track into your backyard, but obviously the larger spot you can find, the bigger and better the track you’ll have to ride. According to Mr Severa, most pump tracks he’s designed had to fit into an area of 1000 m2 maximum. He’s designed some private tracks, but most projects he’s worked on were commissioned by local authorities. Municipalities in European countries are willing to invest money from the common budget into sporting facilities to support young athletes.

Let professionals do the legal work

An average building process has two basic stages: planning and construction. During the planning phase, the project designer creates a layout that should fit the spot. What follows is lots of legal work, including a number of permissions, certifications, verifications and approvals we can hardly elaborate on in one article. According to Mr Severa, the administration process may take up to six months. Once the project’s greenlit, the construction can start. 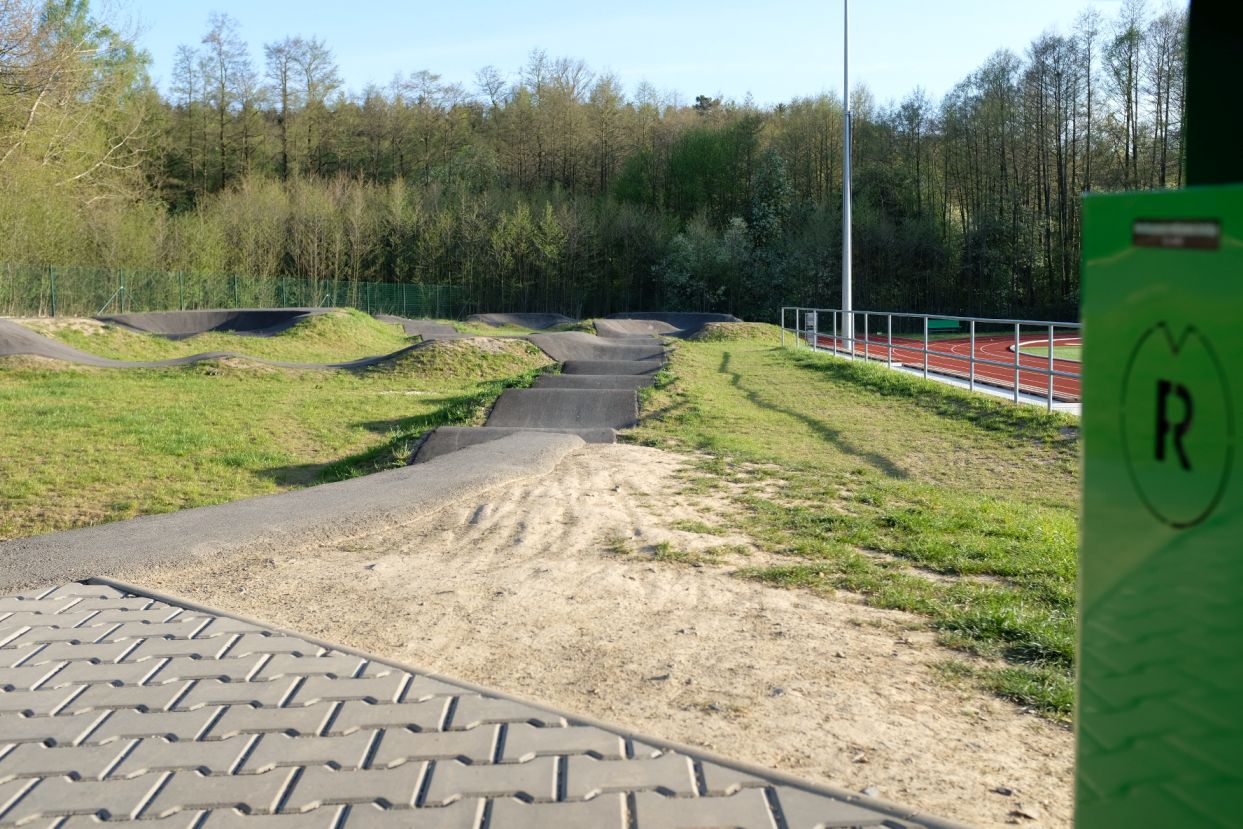 The design of a track depends not only on the size of the area but also on specific demands of the future riders. Some people prefer to have pumps with tight radiuses that are easier to jump, while others like mellower radiuses for less aggressive riding. A perfect track usually includes both kinds so that everybody can find their favourite parts. The longest pump track Mr Severa has designed was up to 300 metres long with 10 banked turns and up to 30 pumps. Designing the layout has no strict rules except that there should be no flat spot on the track. Every square metre of the circuit should tilt upward, downward or sideways because coasting is undesirable. Smoothness of transitions between all rollers and between rollers and berms is what makes the track fun to ride. It’s recommended to start with turns with constant arcs and height up to 200 cm. Some work can be done with average tools such as picks, spades, shovels and wheelbarrows, but for bigger projects, heavier machinery like excavators and backhoes are welcome. The surface should be finished and compacted with a vibratory plate. 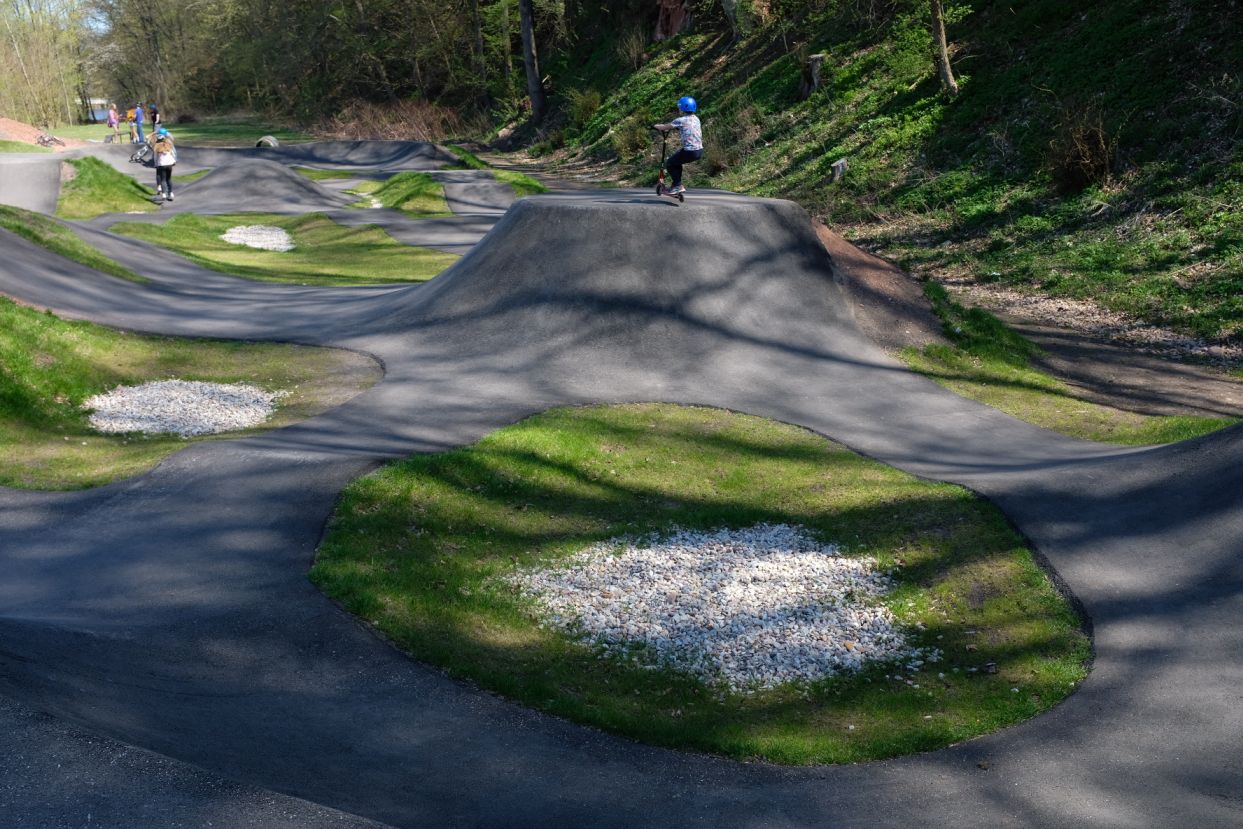 There are two basic types of tracks in terms of the ground material used for the construction. You can either have a simple dirt track covered with gravel or a pump track with dirt foundations and tarmac upper layer. Tarmac is more durable and requires almost no maintenance. On top of that, it can also be used by skaters and scooter riders. Gravel track is vulnerable when ridden after rain and should be maintained by the shovel crew at least once a month, depending on the intensity of shredding. Price will differ across countries, depending on the cost of labour, but a tarmac finish triples the price of the pump track in comparison to a track made simply of dirt and gravel. The decision will be made with the budget in mind. If you want to have a pump track in your city, contact the responsible officials from your municipality. Since pump tracks can be shared by cyclists, bikers, scooter riders and skaters, the chance to engage someone from local authorities is fairly high. Besides sports stadiums, swimming pools, libraries and playgrounds, there are more and more pump tracks growing. With a little effort, you can have one too. How to Carry a Bike? Do It Like a Pro! 10 Sentences Only a Cyclist Would Say