What makes a city bicycle-friendly? Is it just the amount of safe bicycle paths available or are there other criteria, some of which even cyclists have not considered? The Berlin-based insurance company COYA may have developed the most comprehensive standards used to judge a city’s ‘cyclability’.

Why an insurance company? As the company explains on its website, “At Coya, cycling is in our DNA. As digital insurance specialists and committed bikers ourselves, we firmly believe that cyclists should be free to get from A to B, without having to worry about road quality, safety or bicycle theft.” 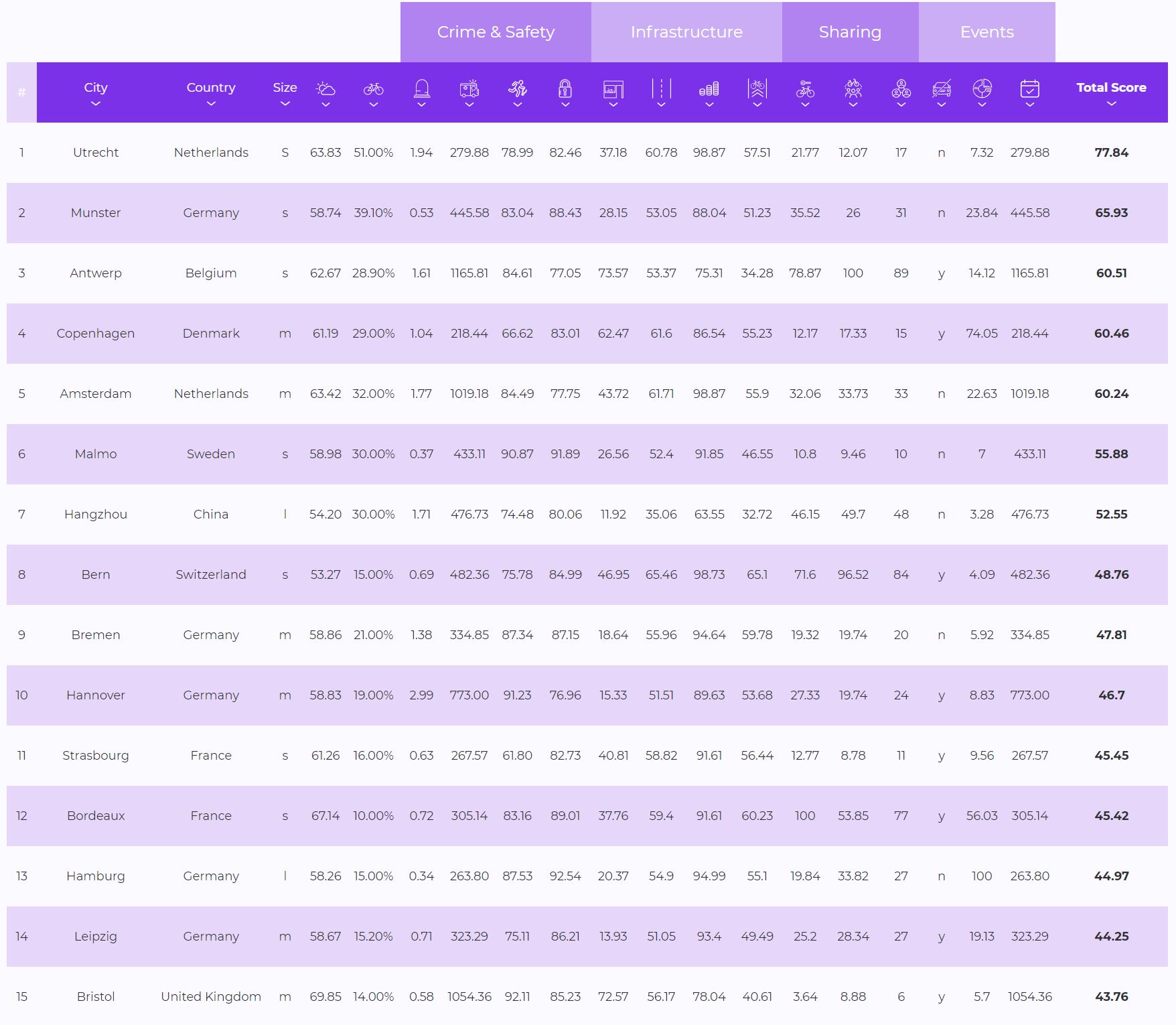 To construct its Global Bicycle Cities Index 2019, which judged 90 cities worldwide, COYA used no fewer than 16 criteria, beginning with the one you wouldn’t think was that important (but, of course, it is): the weather. They calculated each city’s “Weather Score” by taking into account the total annual hours of sunshine, average annual precipitation (in millimetres), and the number of days below 0°C and over 30°C.

The top city for good cycling weather was not much of a surprise: Melbourne, Australia (though the second-placed was a surprise, Bristol, UK). And which city has the worst weather for cycling? Bangkok, Thailand. Too hot, I guess.

Another unexpected criterion was bicycle usage in per cents. But, as COYA explains, the percentage of a city’s population using bicycles in everyday life “is a huge indication of the overall cycling conditions”. Tel Aviv, Israel, scored best with 9 %, followed by the French city of Nice (8 %). The lowest scorer here was Tbilisi, Georgia, with 0.03 %, and Mexico City a close second, at 0.08%. Prague was 78th, with a mere 1 %. Maybe it’s because of the weather?

Of course, safety features prominently in COYA’s algorithm with three criteria measured: fatalities, accidents and bicycle thefts, all per 100,000 cyclists. Regarding fatalities, one city had a perfect score of zero fatalities: Stuttgart, Germany. The deadliest city was Johannesburg, South Africa, with a whopping 7.43.

To score bicycle thefts, COYA used a weighted average to compensate for the low rates of crimes actually reported in countries where crime is prevalent but underreported. Therefore, they included several subcategories such as the homicide rate, which is the crime most reported worldwide.

Long story short: Don’t leave your bikes unattended in Johannesburg, São Paulo or Bogotá. Sleep easy in Singapore, Seoul and Hong Kong. Prague was ranked an excellent 11th in this important statistic for cyclists. Overall, the safest cities for cyclists were Stuttgart, Melbourne and Sidney; the least safe were Johannesburg and the Colombian cities of Medellín and Cali.

So, it’s quite puzzling that the city that had the most bicycle shops per 100,000 cyclists was Johannesburg, the least safe cycling city on the index with the highest number of cycling fatalities and bike thefts – by far. Maybe it’s just because there is always a need to replace a stolen bike or to have a place to sell one to! Beijing has the fewest shops, a measly 0.2 per 100,000 cyclists.

One other unusual criterion stands out: the number of bicycle sharing and rental stations per 100,000 cyclists. “Considering that the sharing economy is a billion-dollar industry, we wanted to include information about the boom in bike-sharing,” COYA explains. Bordeaux, Antwerp and Bern led that area last year; Bogotá, Lagos and Cairo brought up the rear. Prague was ranked 63rd.

In addition to safety, weather, and bike-sharing, COYA also ranked several infrastructure criteria such as Specialized Roads & Road Quality and Investment & Infrastructure Quality as well as special events hosted by a city to promote cycling as a transport alternative such as No Car Day. In other words, the company appears to have left no stone unturned to come up with a credible and reliable measure of the world’s cycling paradises.

Overall, the best cities for cycling were Utrecht, The Netherlands; Munster, Germany; and Antwerp, Belgium. The worst were Lagos, Medellín and Bangkok. Now you know where not to go on a cycling holiday.