Your bike chain is greasy, noisy, and it stretches. It falls off and sometimes breaks – just because you wanted it to skip three gears up to the big ring. Chains – do we really need them?

Cars don’t use chains, so why should bikes? Since at least 1898, drive shafts have been a serious consideration for bike manufacturers. There are many advantages to a drive shaft, not least the fact that a drive shaft can take up less space and be fully enclosed, as celebrated by Bicycle Patent Prints. 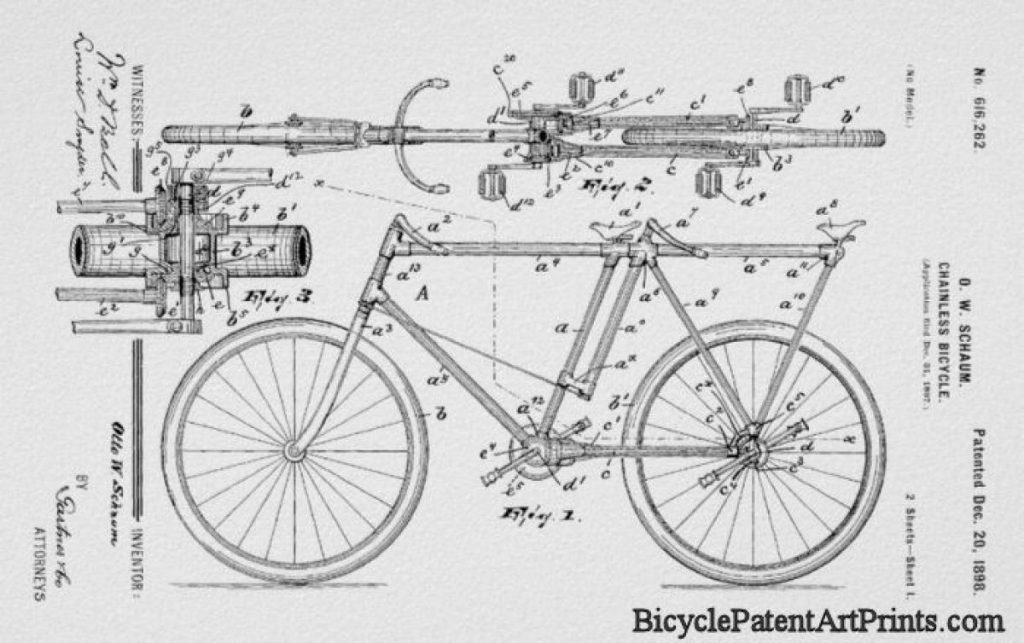 Say goodbye to grease smears on your trousers and legs – and you can spend more time cleaning the rest of your bike. That said, even with the lightest of modern materials, a driveshaft needs to be substantial enough to deliver consistent efficiency without deforming.

But, while your legs may remain grease free, even the most expensive shafts weigh in at over 500 g. And while CeramicSpeed’s innovation should be applauded, serious cyclists should think long and hard about the effect aggressive torque will have on those aluminium cogs.

With belt drives becoming increasingly common in “commuter” and “urban” bikes, it’s time to address some concerns. As a car driver and a cyclist, I had some totally unfounded belief that a belt would be almost elastic or, worse, brittle under the pressure of torque. But if belt drives were this fragile, why would they use them in motorbikes?

Actually, belt drives perform extremely well and as Mr Van Duzer explains, they require very little maintenance. You don’t need to re-grease them and they don’t wear in quite the same way as chains because they’re not skipping across cogs on a cassette.

And that’s the biggest criticism of belt drives. A chain can drive both hub gears as well as cassettes. But, considering low maintenance is the raison d’être of belt drives, it’s almost a blessing that they work best with single speeds and hub gears. And with the increased performances in hub gears, as the demand for them grows, you can expect to see more belt drives on the road.

Why not just do away with shafts, belts, and chains. The resurgent popularity of penny-farthing type rides reconnects your pedals directly with the wheels. But, as this video points out, a large front wheel comes with a unique set of safety issues. This may rule out penny-farthings for the commute.

One thing that I’m surprised not to have seen is a cross between a penny farthing and a drift-trike. In this next video, you’ll see the sheer joy that riding a front wheel direct-drive cycle can deliver. Imagine how much extra that fun could be with hub gears within the wheel.

If anyone knows of a front-wheel-drive cycle with hub-gears, please share! I can’t help but think that will be the future of trikes, and recumbents alike.

Which Chainset Is Right for You?

How to Lube Your Chain in 4 Easy Steps