As always with Valentine’s Day, it can be hard to think of ways to spend genuine quality time together, rather than getting caught up in the gimmicks. So why not take a leaf out of the history books with a little tandem cycling?

Since the 1960s, tandem cycling has had a resurgence in its popularity. On one end of the spectrum, they are superbly popular on the racing circuit. On the other end, they are excellent family bicycles, allowing for fresh air entertainment for all ages. When tandem bicycles first gained popularity in the 1890s, however, they were all about the romance, and it’s not hard to see why.

From mistress to music halls

Daisy, Daisy, give me your answer do,
I’m half crazy, all for the love of you,
It won’t be a stylish marriage,
I haven’t got a carriage,
But you’ll look sweet, up on the seat
Of a bicycle built for two!

This popular song, written by Harry Dacre in 1892, was believed to have been inspired by Daisy Greville, Countess of Warwick, and one of Edward VII’s mistresses.

It is said that when Dacre travelled to the USA, he was charged import duty for the bicycle that he brought with him. When a friend commented that it was just as well it wasn’t built for two, otherwise, he would have been charged double, Dacre is said to have become enchanted with the idea of a bicycle ‘built for two’.

The song, which rapidly found its way into the music halls, was timely. The 1890s was the first time that tandem bicycles had really become popular. A Danish inventor, Mikael Pedersen, is credited with the creation of the first publicised tandem in 1898, with his Pedersen bicycle. The trend quickly caught on and early machines included such names as the Humber, the Singer, the Rudge, the Raleigh, the Whitworth, and the Chater Lea. 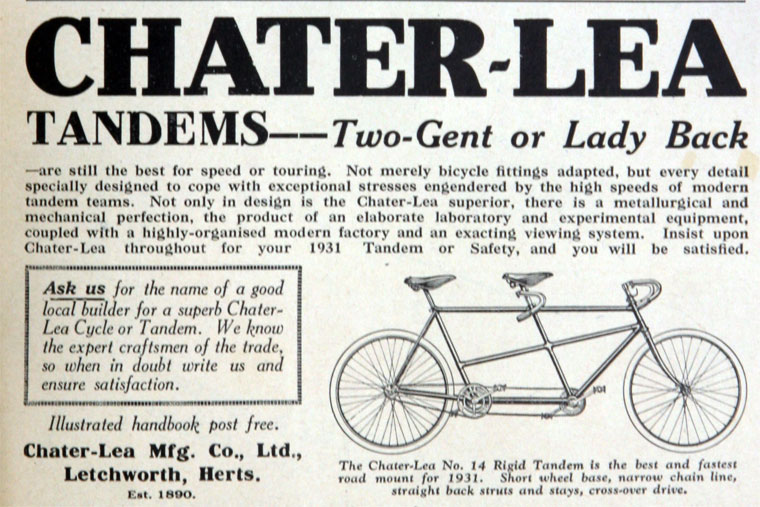 Given the tantalising but eminently respectable closeness that a tandem bicycle allowed for between the two riders, they quickly gained the moniker ‘courting bikes’, popular with couples who wanted to spend time together. The idea was that the gentleman would ride on the back seat and steer, while the lady could perch in the front with enough room for her skirts. That meant that all the controls were loaded to the rear passenger, the person in front could simply enjoy the ride.

Alternatively, there was also the creation of ‘the sociable’ for a side by side variation on the tandem. Perhaps one of the greatest forms of flattery is satire, and such was the popularity of both the tandem and Dacre’s song that both were the subject of satirical versions that played on the symbolic link between the tandem and marriage.

Over time, the tandem has evolved. Somewhere along the line, the fact that the courting bikes placed women directly in the line of fire in case of a collision and that their front sear bore the brunt of cold winds may have been noted. More than that, however, as the trend for tandem cycling grew, men chose to cycle together, requiring greater equality in the control of the bikes.

Today, tandem bicycles are rather more sophisticated than those early days, and there’s certainly no gender requirement for who takes the lead or responsibility for the steering. With that established, however, one thing hasn’t changed. Those early riders had one thing absolutely right – given a beautiful location, few things are more romantic or provide a better way to spend quality time with someone you love. What could be more romantic than a bicycle built for two?