Back in Time: When Cyclists in Africa Were Chased by Lions

Subscribers to the Police Illustrated News had an opportunity to read a rather curious article on 12 November 1898. It […]

Subscribers to the Police Illustrated News had an opportunity to read a rather curious article on 12 November 1898. It depicted the hardship of being an avid cyclist amidst the wildlife of Africa. And the story is just as astounding now as it must have been back then.

D. C. Robertson lived on the Gala Estate in Namazi, which is modern-day Malawi. On Monday, August 22, 1898, he was returning from the city of Blantyre and was entering the final stretch of his journey. Riding with just the moon to light his way, he left the main road and dismounted to push his bicycle up the path towards his plantation. There was a very steep hill in front of him, not suited to cycling. As he pushed the bike uphill, Robertson heard an animal making its way through a bush nearby.

At first, he thought it might be an eland or a buffalo, but felt uneasy nevertheless. He kept to the far side of the road and went on as quickly as he could. After a few seconds, he dared to look back and saw a full-grown lion staring back at him. To make things worse, the lion went quickly in pursuit. Robertson hurried and tried to mount the bike, but fell twice in attempt. Before he finally got in the seat, the lion had managed to reduce the distance between them by half. 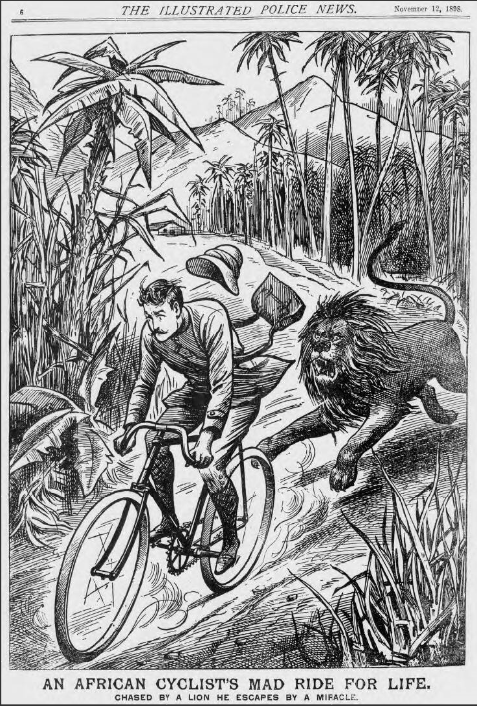 Luckily, Robertson was near the top of the hill when the chase started and managed to get over the crest before the big cat caught up to him. The lion was still close, however, so when an open culvert appeared roughly 200 yards ahead, the cyclist had no choice but to go through. The impact kicked him high out of the saddle, but not off the bicycle. The exiting point was lower than the point where he entered it, so Robertson was able to make it to the other side.

His front fork twisted after the impact, but the plantation owner ignored the wheel grating against it and pushed on. Soon, Robertson reached a smooth part of the road and put on a decent amount of speed. He sighed in relief when the growls behind him finally went silent. Having made it to the Gala Estate unscathed, Robertson went back the next day to find out when exactly the lion gave up. According to him, the pursuit lasted for two miles and stopped right after the crazy culvert stunt.
“No more moonlight rides for me,” Robertson vowed to the press afterwards.

Stranger in a Strange Land: Adventures of a Globetrotting Cyclist

Cycling and Snobbery: Why Aren’t More People Joining the Sport?

Breaking Food Addiction – How to Quit Once and For All