They’re small, fast, and come from nowhere. But make no mistake, a squirrel-strike could send you flying over your handlebars.  But as this image proves, the squirrel is most likely to lose the battle against spokes. 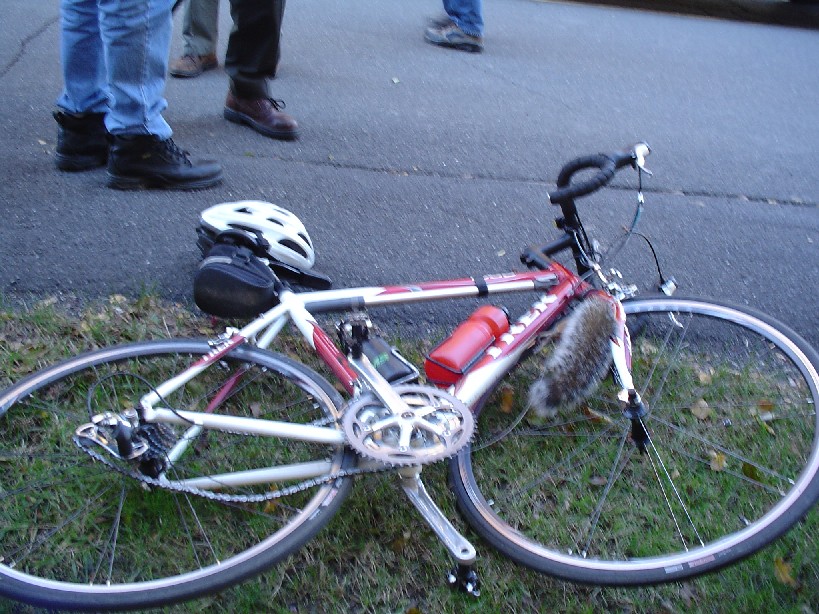 Until I had my own run-in with a baby squirrel, I thought the squirrel-strike something of an urban legend ­– despite all the evidence. Fortunately, I narrowly avoided sucking up the baby-squirrel in my spokes but, as this video shows, squirrels are another reason to cycle clear of curbs.

As Marcus Burghardt discovered, carbon wheels are no match for a stout Labrador. One of the joys of Le Tour de France is wondering when and where a stray dog will make their appearance – and how it will affect the General Classification standings.

Sometimes, though, the dog just wants to join in as we can see here in Trofeo Panalica in Sicily. I swear that one of the cyclists even tries drafting him and uses the dog as an obstacle to stage a break. What exactly are the UCI rules for dogs in the peloton?

This video is well worth watching from the start, as it demonstrates a conscientious bunch out on a group ride, abiding by the gentlemanly rules of the club-ride. The riders ahead diligently point out potholes, and are alert enough to avoid most dangers until just after one minute into the video.

Judging by the fact that the front wheel is still intact, I’m willing to bet this was an aluminium wheel – or at least a non-race durable carbon wheel. It looks as though the deer escaped unhurt, and the cyclist only suffered some minor scratches.

Australian magpies are such a menace that they make international news. They’re not averse to terrorising entire schools by scratching the faces of children, so they’re certainly not going to be any more sympathetic to cyclists. Here are some tactics you can try to avoid a magpie attack.

Problem is, if you like to explore by bike, you never know when you’re going to accidentally stray into a magpie’s territory. And when you’re cycling at speed, a surprise bird-strike can have serious consequences. What run-ins have you had with animals? Let us know in the comments.

Should You Buy the Latest Garmin or iPhone?