Without exaggerating, we could say that Tom Lynch is to the 80’s and 90’s BMX scene what Tony Hawk is […]

Without exaggerating, we could say that Tom Lynch is to the 80’s and 90’s BMX scene what Tony Hawk is to skateboarding. If you google his name, countless racing videos from those two decades will pop up to carry you away on a wave of childhood nostalgia. But even though the former world superstar could be happily resting on his laurels for the remainder of his days with everything he achieved, he decided to put his talent up for helping others.

Tom has been riding since he could remember, starting with shredding the hills of his British hometown, firstly on motocross bikes and then, as a new trend took over in the early 80’s, BMX became his obsession. For the next 15 years, he spent almost every weekend competing and burning through expert classes all the way up to the elite Superclass. His enthusiasm and perseverance earned him the titles of National Champion, British Champion, European Champion, number three in the World, and of a World Team Trophy Winner, along with multiple other trophies, global press coverage, and hordes of fans.

In 1994, after years of pushing himself to the limits and starring among the elite, he stepped out of the limelight to coach the next wave of promising Olympic hopefuls and world champions. “After that, well, I knew staying at the top of BMX couldn’t last forever so I decided it was the time to get a normal job.” But his idea of joining the ambulance, inspired by a childhood accident at 11, was far from normal.

Tom started training with the London Ambulance Service, working his way up to an Emergency Medical Technician. He couldn’t help but grow increasingly frustrated with the impossible London traffic, stealing precious time from patients, and often remarked that he would reach people much faster on his bicycle. His colleagues usually laughed him off but he wouldn’t stop pushing his idea until he got the green light for the trial of the Ambulance Cycle Responsive Unit (C. R. U.) in 1999. With friends in the bike industry, Tom made sure that he had all the top gear available and set out to answer 999 calls in the West End of London. All the life-saving equipment fitted on his bike, even including the now lightweight defibrillator, weighed nearly 50 lbs (23kg), but he didn’t mind – he was on a mission. 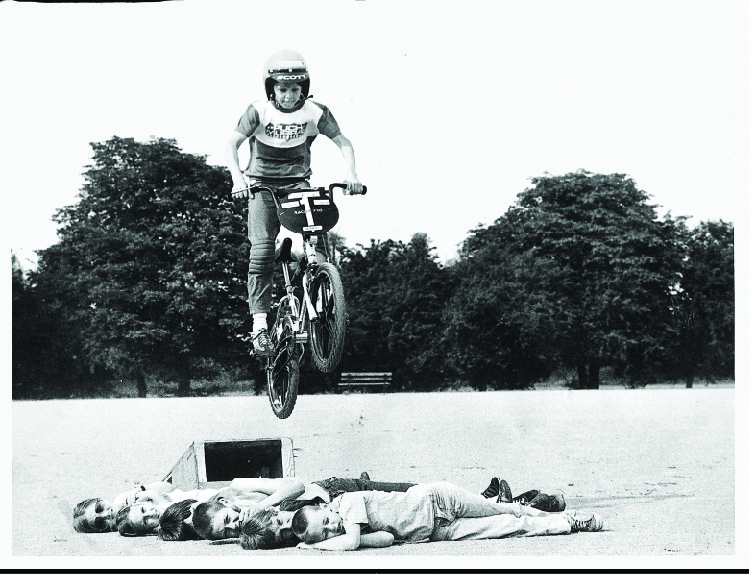 “I knew the day the trial became a success. I was based around the West End and the calls were coming in and I was doing my best to ease the pressure on the ambulance crews. I would race to incidents, flying past traffic, cycling where motor vehicles could not go and getting to patients quickly. I went to five incidents within one hour. I treated the patients, cancelled the ambulances and used other medical centres as opposed to the accident and emergency.”

According to data, not all patients calling the ambulance need hospital treatment, lots of incidents can be handled in the field by a single medical professional, and that’s where the C. R. U. comes to play, saving time, resources and, ultimately, lives. Tom needed to push through a lot of bureaucratic and organizational obstacles but nearly a decade later, his unit contains several teams across London made up of over 100 paramedics and trained volunteers, with other teams spread in lots of major UK cities, across Europe, USA, and newly even China and Japan. One specific group of people that hugely benefits from faster and agile medics is heart attack victims. Every second the brain is deprived of oxygen makes a life-altering difference and the results for preventing death from cardiac failure have significantly improved as a result of the work of the C.R.U. in the areas they work.

Regarding his still-growing crew, Tom remarks, “Training can get very competitive. We have highly motivated individuals on the team such as triathletes, marathon runners, mountain bikers, cyclocross and roadracers as well as lots of fit and positive people. When you fuse this with excellent paramedic skills and a commitment to care you have a winning combination.”

You can’t miss them in the field, equipped with day-glo attire and bicycle smothered in customized bikepacking bags with medical gear, they’re on the road day in, day out as one big life-saving family. And their results mean far more than just successful statistics, they have far-reaching impact. “We met one of the first people we’d treated for a cardiac arrest. He’d turned up with his grandchildren; the youngest one looked up to us and said, ‘thank you for letting me meet my grandad.’ Those are the moments we live for, those are the gold medals,” Tom emphasized.

No, we’re not crying, you’re crying. A desire for a faster help and to ease the pressure on ambulance service transformed into an outstanding service staffed by people who love what they do and who came together solely because of Tom’s unrelenting vision and excellent coaching skills. There might be no more BMX trophies for him in the future, but we don’t think he minds.

VIDEO: Watch a Police Officer Chase Down a Bike Thief in a Cycling Pursuit

Connected Bikes Are the Future