Sometimes, you just can’t and won’t think small. The British city of Manchester is the prime example of that statement, […]

Sometimes, you just can’t and won’t think small. The British city of Manchester is the prime example of that statement, with their bold plan of future thousand miles of cycling and pedestrian routes.

Unveiled on 27th June by Chris Boardman, Manchester’s first ever walking and cycling commissioner, the 15-step, ten-year plan called Made to Move intends to tackle headfirst the societal issues that are springing up across Britain. Those include “an obesity epidemic, air quality issues and streets that are often clogged with motor traffic during peak hours,” according to the project’s website. Adopted unanimously by the region’s ten district leaders, the plan’s underline is to prioritize people over vehicles.

Today, @Chris_Boardman has unveiled a plan to create the UK’s largest joined up walking and cycling network – #Beelines 🐝

The network will revolutionise how journeys are made in Greater Manchester.

Find out how we're making #MCR a better place to live: https://t.co/gG0VL8weVx pic.twitter.com/5j3dP0uxY3

Greater Manchester has an abundance of something Boardman calls the “severance points” – chaotic crossings or confusing crossroads – that make safe passage difficult and dangerous for cyclists and pedestrians, forcing them to avoid these areas, resulting in fewer people on bikes and foot. One of the project’s major focal points is the transformation of said spots into about 1,400 fully segregated crossings for cycling and walking along with the so-called 25 “filtered neighbourhoods”, which will prioritize people’s movement over motorized vehicles. The mayor or Greater Manchester, Andy Burnham, is all but apologetic about the bold plan. “Greater Manchester has a long history of doing innovative things and our approach to Beelines is no different. If we are to cut congestion and clean up our air, decisive action is needed.”

The proposed network of cycling and walking routes is called Beelines after the “worker bee” in the city’s emblem, which will also include 75 miles of Dutch-style segregated lanes, will be the largest of its kind in the entire UK and will cost £500m, Manchester’s initial investment into a future with more sustainable public transport, worth £1.5billion in total. Such an expenditure on a human-friendly traffic network is comparable to the likes of Copenhagen or Amsterdam. 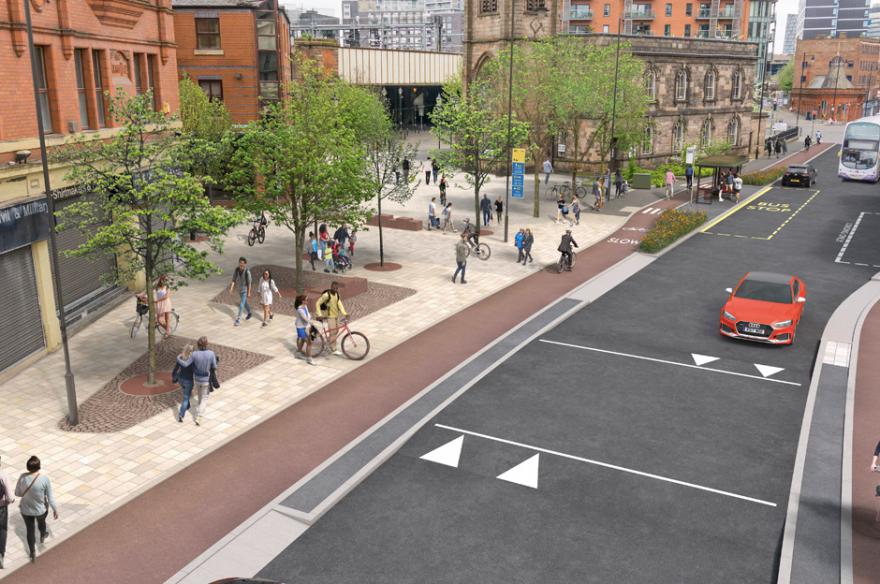 “Crucially, the proposed network is not for people who already cycle or walk for the majority of their journeys. Its focus is to enable the two-thirds of people who currently use their car as their main mode of transport, to walk or cycle,” Boardman explained, hinting a the much-debated concept of “hostile architecture”. Annually, about 250 million car journeys, shorter than 1 km are made in Greater Manchester and a large percentage of those 0.6-mile journeys are parents taking their kids to school because the current state of the streets is mostly unsuitable for even a competent 12-year-old on a bicycle. Only 2 per cent of schoolkids cycle to school in the UK, versus 50 per cent in the Netherlands. The Manchester’s city council is hoping to change that. “I want to make Greater Manchester one of the top 10 places in the world to live and it is action of this sort which will help to deliver that promise,” claimed Chris Boardman. We can’t wait to see how this turns out!

The Mighty Arch-2-Arc: Training for One of the Hardest Ultra-Endurance Triathlons