The first part of my 13-month trip summary got me pondering all the countries I passed through. Now I’d like to shortly shine some light on the practical stuff that you might be curious about or even would want to learn about while preparing for your own trip. 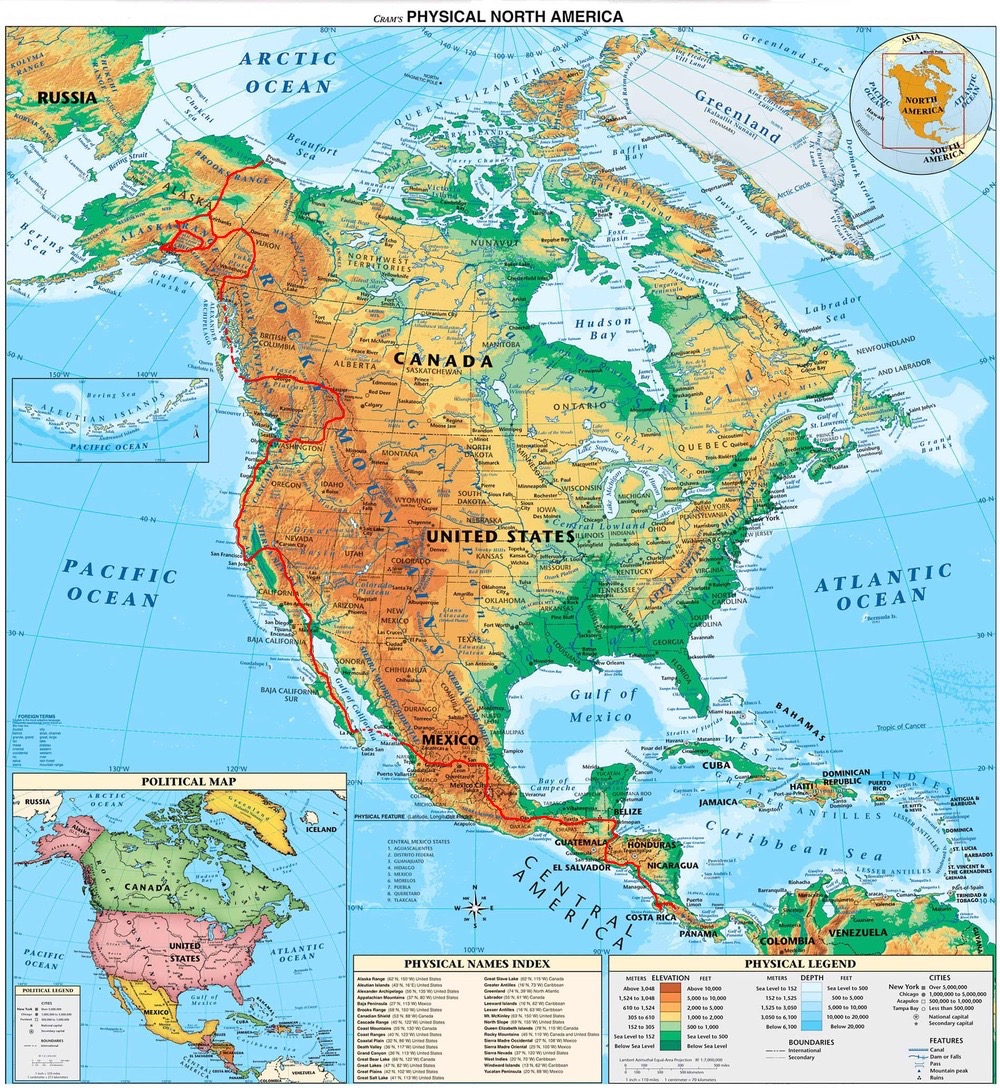 Wilderness camping in Iceland, Alaska, and western Canada was just amazing. You can literally pitch your tent anywhere without having to worry about comments or other hassle. Just make sure you get well-informed about the wildlife and how to deal with it.

“Riding your bicycle in temperatures below zero can be either torture or a party, depending on your preparations.”

For a beginner and maybe slightly nervous camper, these are perfect areas (especially in summer when there are 24 hours of light). For everybody who loves wilderness camping these places are heaven! BLOG: Hera van Willick – How I Managed to Stay on the Road for 13 Months

Riding your bicycle in temperatures below zero can be either torture or a party, depending on your own preparations. It’s not too hard to stay warm while riding, but all changes when you stop. Whenever I stopped to eat something (outside, of course) I would cool down really bad within minutes. The best I could do to prevent that was to immediately put on my down jacket. After a stop I would often start riding with the down jacket on only to take it off again about 10 minutes later as I got too warm. I rode with MTB winter shoes and merino wool socks. 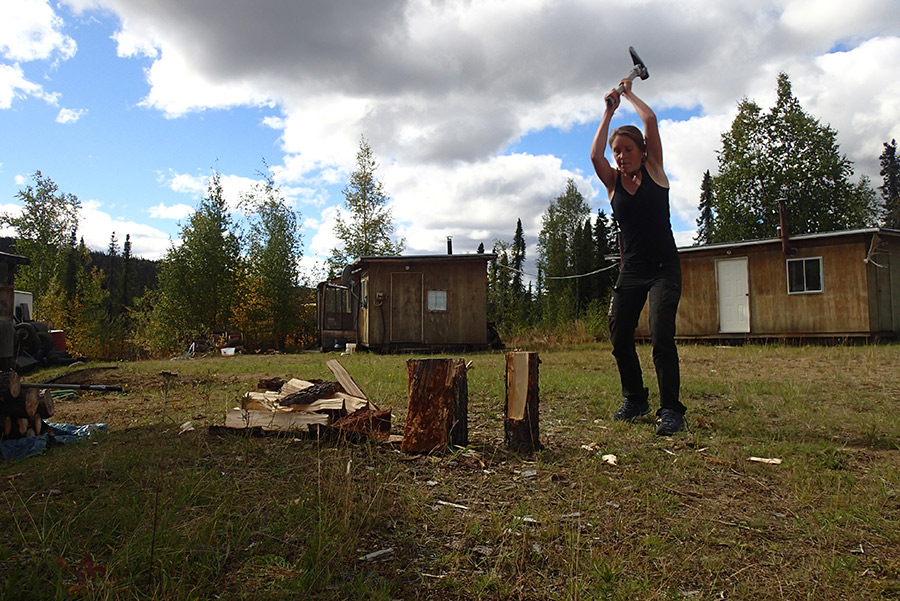 Nonetheless, my feet would often get numb and I’d have to warm them up with my hands. A real treasure were the “hotties” – those nasty chemical little bags that you have to kneed in order to get them to heat up. On extremely cold days I would use these to keep my hands warm. Mittens are great, and you can put the hotties under your fingers, which is impossible with gloves.

I hadn’t mapped out my route before I took off. I only had a few places on my list: Alaska, Dalton Highway, Icefields Parkway. While on the road, more places got added to that list: Top of the World highway, Death Valley, Salvation Mountain, and Slab City. My routes form themselves as I go, mainly inspired by the recommendations of locals and other cyclists, the weather, and my mood (solitude, people, mountains, flat, culture, nature). 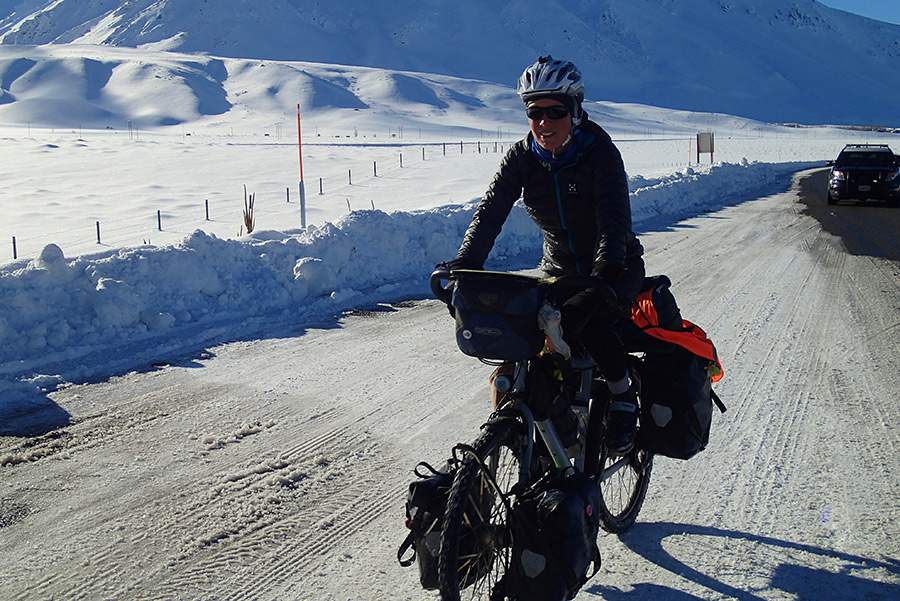 The main thing I’ve learned during this trip about planning is this: some years ago I could draw any line on the map and enjoy cycling that route. The excitement and enjoyment was found in just cycling in a foreign place. Now that I’ve cycled through a lot of foreign places, this in itself isn’t that exciting anymore and I really have to start putting thought in where I go. I need to pick specific and beautiful routes to really enjoy it now.

Especially central America is considered an unsafe place by many. And it’s true that there are gangs in Honduras, El Salvador, and Guatemala and murder takes place pretty much on a daily basis. Nonetheless, it’s a pretty safe place to cycle through (based on my personal experience). Tourists aren’t really a target for those gangs. They can pretty much do whatever they please but if they’d target tourists they’d be in trouble. Apart from that the locals can tell you where to go and which places should you better avoid. If you stick to their advice you’re very unlikely to get into any more trouble than you could get in any other place. 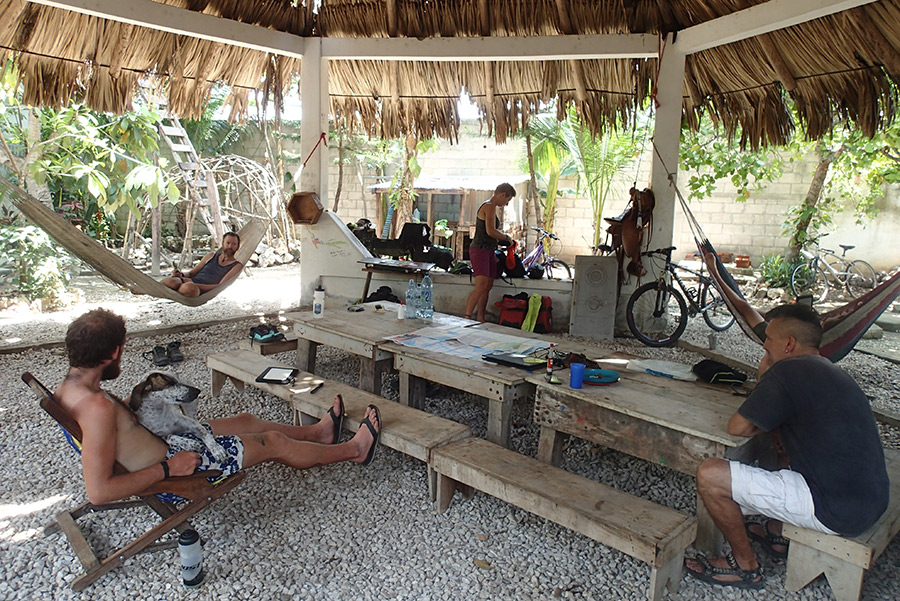 Of course, I could write a lot more about those subjects (and others). During the upcoming year, I’ll write in bigger detail about some of those in articles focused on the more practical side of travelling by bicycle.

But for now, here’s just one more. One that a lot of people seem to wonder about.

So, how much does it cost? Riding your bicycle from Alaska to Costa Rica.

During that one month in Iceland I spend about €8 a day. To be able to spend that little you’ll have to avoid campgrounds and you’ll have to cook all your meals, buying your supplies at BONUS (TIP: “Cheaper” supermarket with a pink pig as their logo).

Because my ride from Alaska to Costa Rica took exactly 12 months, I’m gonna give a financial overview of one year of traveling. 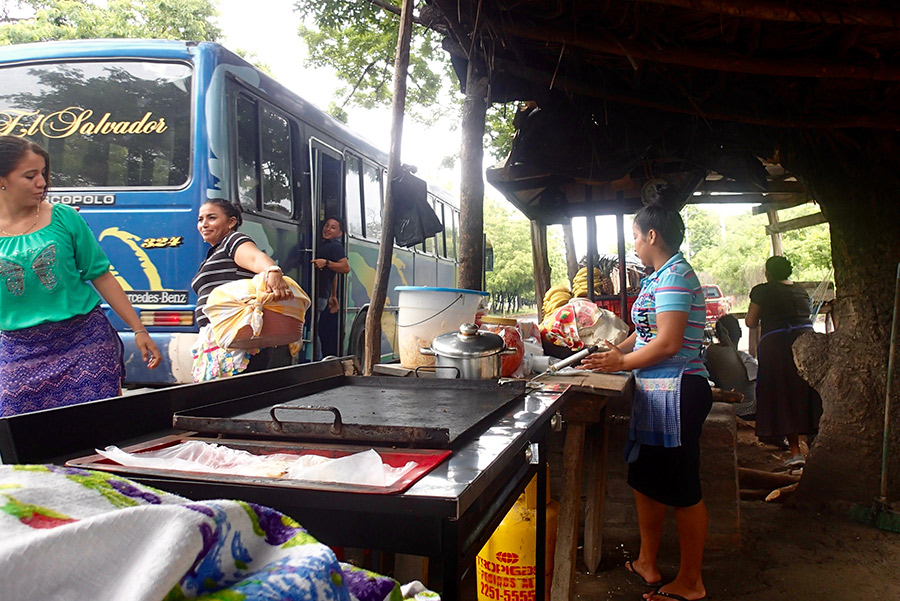 “I love to be self-supporting and can make it due with a very little. It feels good to not to rely on money too much.”

The 4,5 months I’ve spent in Mexico and central America cost me €1725. The only unusual and big expenses were the contract for my SPOT (emergency GPS) for €200 and buying a guitalele for €100.

As you can see I’ve spend nearly the same amount of money in the “cheaper” countries of central America and Mexico in 4,5 months as I did in the U.S.A and Canada in 7,5 months. How is that possible?

First of all, in the more “expensive” countries I never stayed in a hotel, ever, and I never went out for food. Wilderness camping is free and cooking your own meals is cheap. Apart from that, there are WarmShowers’ members who I regularly stayed with and where I got invited for food and sometimes was even given snacks for the road.

In “cheaper” countries, like Central America, camping isn’t always safe or practical. Accommodation is more affordable and I ended up paying about €7 for a room every now and then. Also the food at food stalls and simple restaurants is cheap and (often) tasty. But even meals of €2 several times a day kept adding up in the end. That’s why in countries in Central America and Asia I ended up with a much higher average then in (western) Europe, Canada, and the U.S.A.

Summed up, all my credit card bills for that year added up to €3480. We can make that €4000 considering I’ve used my other bank card a few times and had some cash on me.

Add €765 for the insurance (pretending I did have insurance during the full year, which I SHOULD have had). The two flights, from and to the Netherlands, cost €1160.

12 months of travelling on a bicycle through North America, including flights from and to Europe, a 2-day ferry ride, a guitalele, the contract for my SPOT emergency GPS, and insurances.

I can tell you all these numbers because I get asked about them a lot. I kind of know what I spend, more or less. I usually say I spend between €3 and €12 a day. And if I strip that €16,23 down to all the stuff that aren’t the daily expenses on food and lodging, it indeed comes down to an average of about €7.

So, here’s another calculus. One that I would like to share with you, because many people tell me they couldn’t afford a one-year trip.

Imagine you make €9 per hour (that’s pretty much the minimum in the Netherlands). To earn €5925 (my all-inclusive year budget), you’d have to work 658 hours. That’s 82 full workdays, nearly four months.

You don’t have to be a millionaire or have rich parents to travel the world.

I finance my trips with some money I saved over the years working only part-time, some donations, my blog, and presentations. I know there are cyclists that travel on half the budget that I’ve spent. I also know there are many who spend (at least) twice as much and still feel like they travel low-budget.

I love to be self-supporting and can make it due with a very little. It feels good to not to rely on money (“the root of all evil”) too much. But I also don’t want to deny myself things that I need in order to travel safely and healthily because of the costs.

This was a little peek behind the scenes of my ride from Alaska to Costa Rica. In the upcoming year I’ll be writing several articles that tell more about the practical side of bike travel.

In a month and a bit I’ll get on my bicycle again. Where to? That’s still unclear. But I might be able to tell you more about that in my next blog. As for now, I’m mainly enjoying being back in the Netherlands and with my family and friends. I’ll be back in the saddle before I know it.