It’s hot! It’s hot! It feels as if a belt is strapped around my head. Another few gulps of water. My stomach feels like a ball that’s pumped up to hard. I’m nauseous but I don’t have to throw up, neither go to the toilet. Blegh! This is no fun!

I pedal and pedal while the belt around my head is pulled tighter and tighter.
In the shade of some trees I sink down at the doorstep of a restaurant. In the bathrooms I scoop several handfuls of water over my head. That feels good! Outside in the shade I wait till my headache decreases before I get on my bike again.

About twenty kilometers further I sit down again, this time in front of the Pemex gas station at a big intersection. My body hurts, the surroundings are boring, there’s noise. Shaun, who’s joined me again since Mazatlan, want to make me look at the sunny side of things. But I just can’t take any more sun! Can somebody please turn the light off?

As we continue it suddenly becomes clear to me; this is where the fun ends. I feel lousy. And I don’t mind that I feel lousy. I’m allowed to feel lousy. This is stupid, just stupid.
But I pedal, and that’s what it’s about. Off to better times, more beautiful places, tasty flavors, silence or pretty sounds, the smell of nature, the coolness of the mountains and some tailwinds.

In the days that follow I come to the conclusion that my chronic stomach ache is caused by drinking big amounts of water. Too much, too little, it’s hard to do it right. Riding into higher elevations the heat becomes less overwhelming and the belt around my head gets some slack. 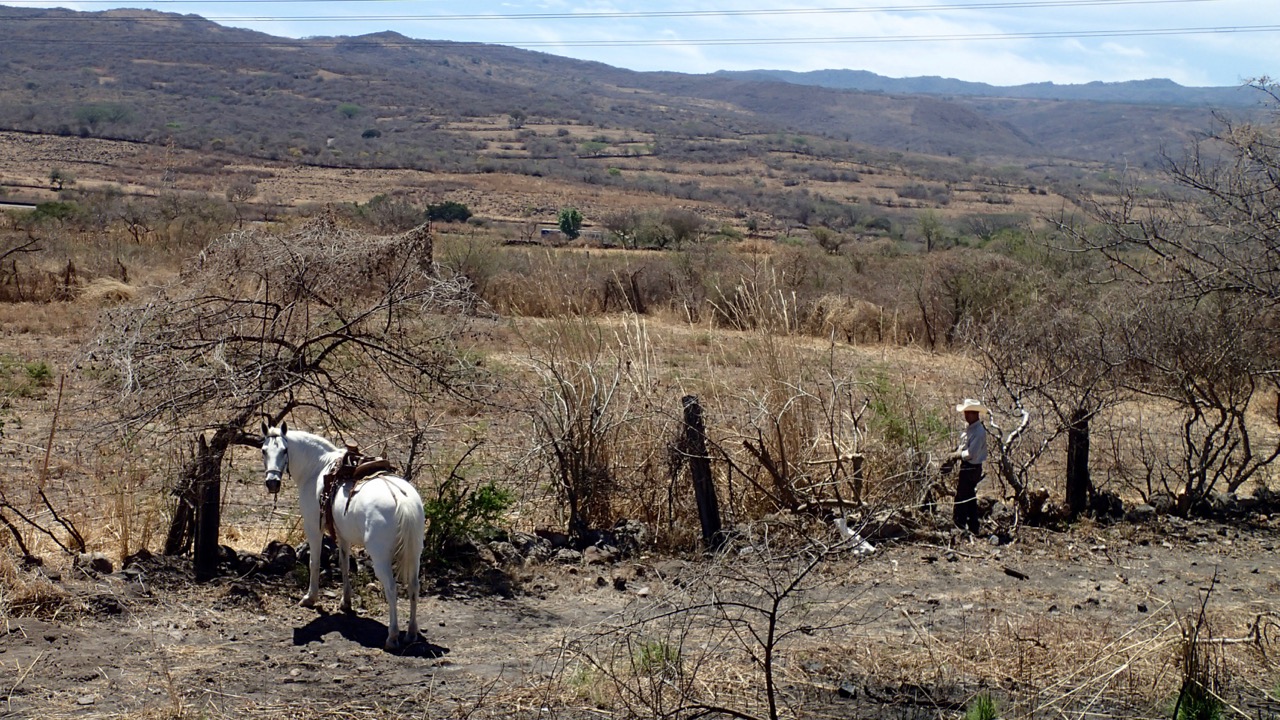 After a week on the bike I arrive to Guadalajara. The biggest city in Mexico after Mexico city. We’re guests in an American family. Dave is the director of the American School Foundation of Guadalajara. A private school where they teach in English to (mainly) Mexican kids from well-to-do families. On his invitation we visit the school and speak to two high school classes about our travels. They listen attentively and ask many questions. The school has several sports facilities, including a swimming pool. In the classrooms every kid works on their own MacBook.

The difference with the kids that I see begging in the centre of Guadalajara the next day is poignant. A girl of about seven years old walks around the main square holding a sticker sheet with yellow hearts. She wants to put a sticker on me in exchange for a few peso. I say no. I never know how to deal with begging kids. A kid needs to be taken care off, but I wonder if the money they make on the streets is actually used for that or if it goes straight to parents who spend it on themselves and a bigger catch will only be an extra motivation to send their child out begging.

Also the amount of older people that either in a cart, on crutches or huddled under a blanket stands or sits in the streets shocks me. The worst part is condition they’re in.
‘Grandpa’s’ that hold up lollypops with their last strength, trying to sell them for a few peso. ‘Grandma’s’ crawled up sitting against a wall with a plastic cup in front of them. I see a man actively searching through bins and run after him with some bread. When I tap his shoulder and give him the bread he looks at me with wide surprised eyes. I’ve always struggled watching unfairness and suffering, but here in Mexico I feel that it hits me extra hard, as if a belt is strapped tight around my chest.

Yesterday I saw a man in the busy streets of touristic Guanajuato on Sunday. He was dirty and smelly and with both his hands he held up a pair of jeans, the zipper and button broken and no underpants on his body. Give that man a belt, a piece of row if need be. The money is split unfair in Mexico, like pretty much everywhere, but most people seem to be getting by okay with what they have. But the care for the elderly, disabled and people with mental illnesses seems incredibly bad, if not absent.

There is no safety-net or alternative for hem, the government is a corrupt gang that only takes care of themselves. The Mexicans are placed at the mercy of themselves, each other and their god. 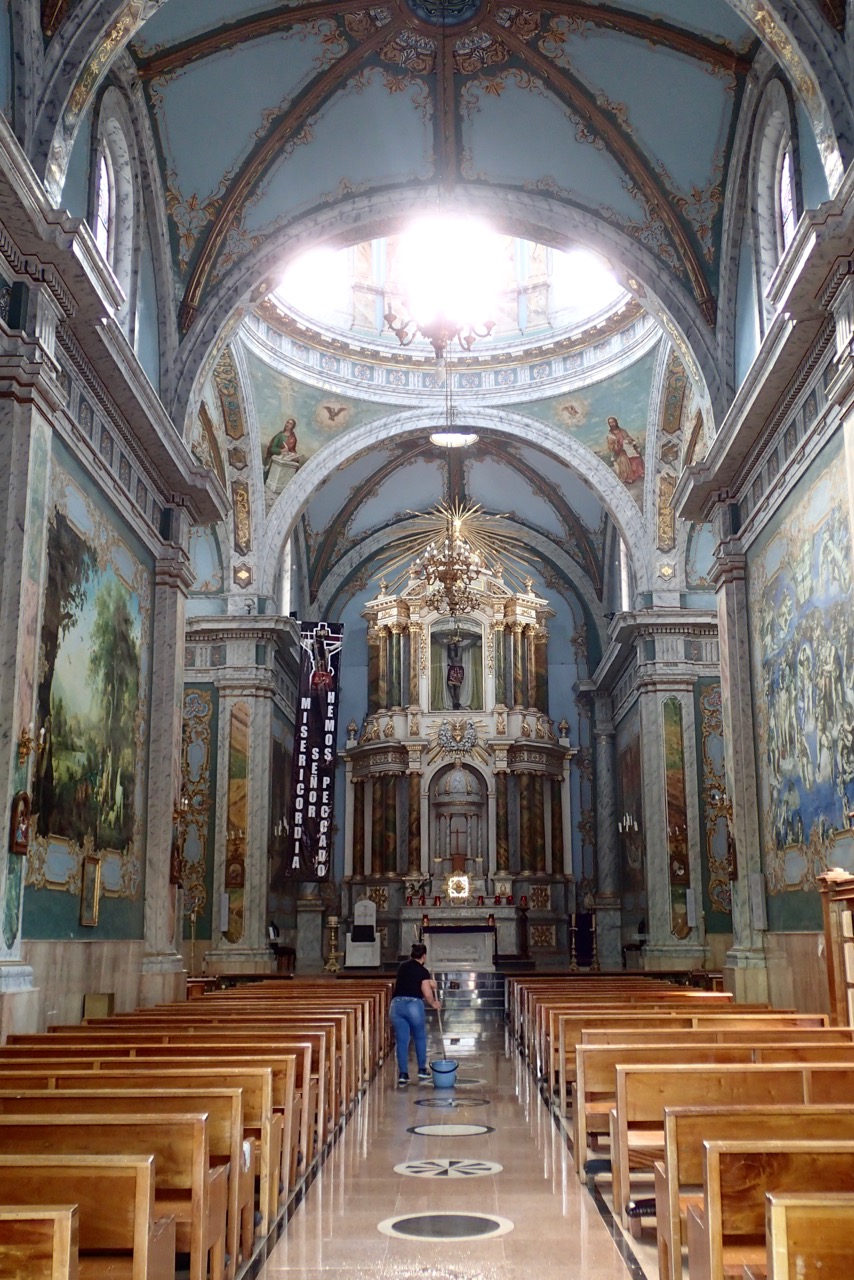 The cycling here isn’t as beautiful yet as I had imagined. The roads are busy and the scenery a bit boring. Though that might chance soon. From Guanajuato I’ll continue east, over smaller roads, towards the mountains and into a nature reserve.

Mexico is loud, both on the roads and in the cities. In the door opening of shops you often find big speakers playing loud music broken up by some advertisements. The main place to find peace and silence are the many churches, where at the moment the preparations for Easter take place. 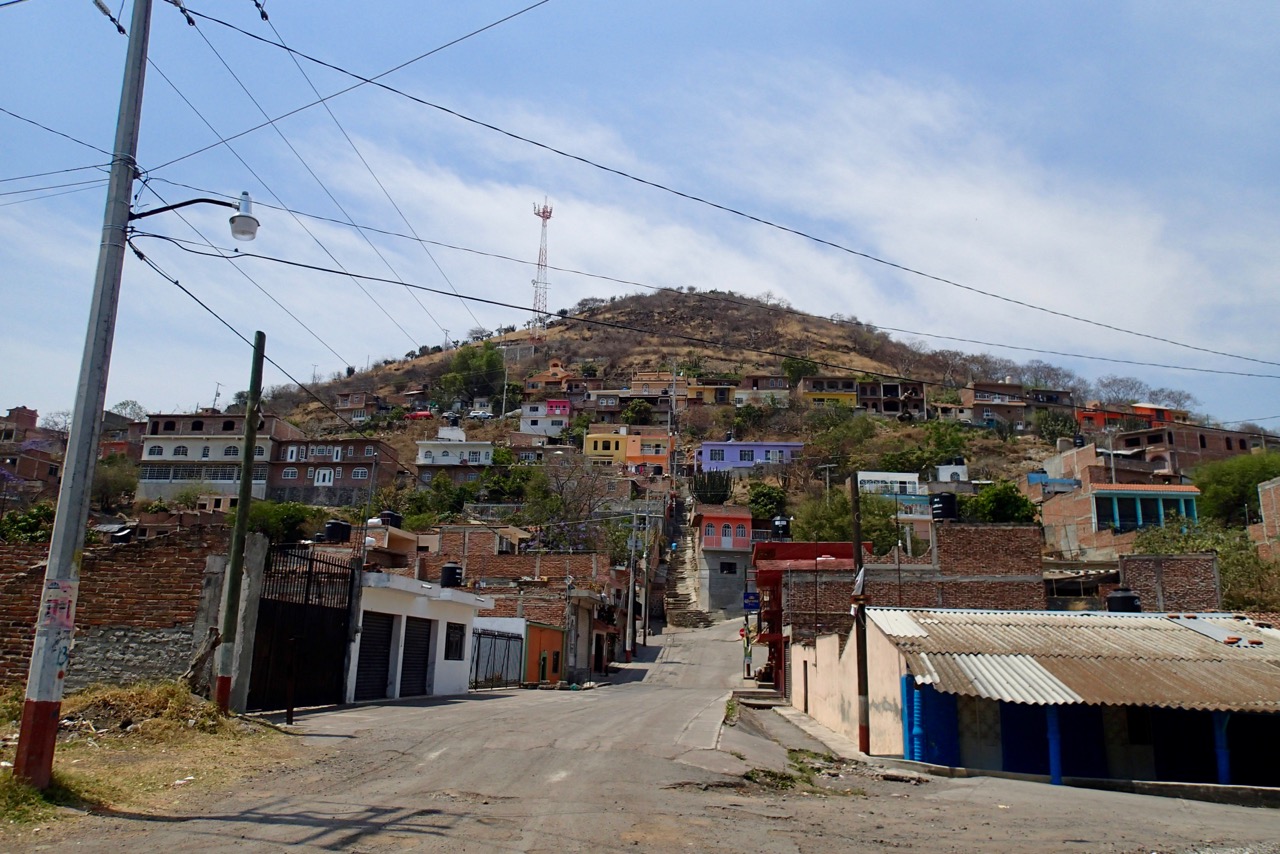 The finest moments of the days on the bike are the visits to towns along the route. Literally every town has a atmospheric center with a church (or four) and a central square where there’s always life. Stalls with churos, ice-cream, taco’s or fruit juices. I like to watch the old man in the villages with their cowboy hats playing chess together or just sitting at a bench doing nothing.

The markets are a great place to find vegetables, fruit, cheese and bread for lunch and during the long light evening I often treat myself on some street food at one of the stalls. The smelly trucks with pigs stacked together motivate me again to stay away from meat as much as possible and eat vegetarian, something that’s quite possible here in Mexico.

My greatest and latest news trundles along on the back of my bike since a week. Ever since the USA I deliberated getting a guitar in Mexico. It seemed like the right place for that. Searching around music shops and markets I only found big guitars and small baubles for kids or tourists. In Guadalajara I found a real guitalele, by Yamaha. Not really an original Mexican guitar, but exactly what I was looking for qua size and price. It weights nearly nothings and is now wrapped in my down jacket and fleece legging in a cover that I strap on my bagage. I didn’t know how to play the guitar yet, but over this last week I learned enough chords to play my way through quite a few songs. 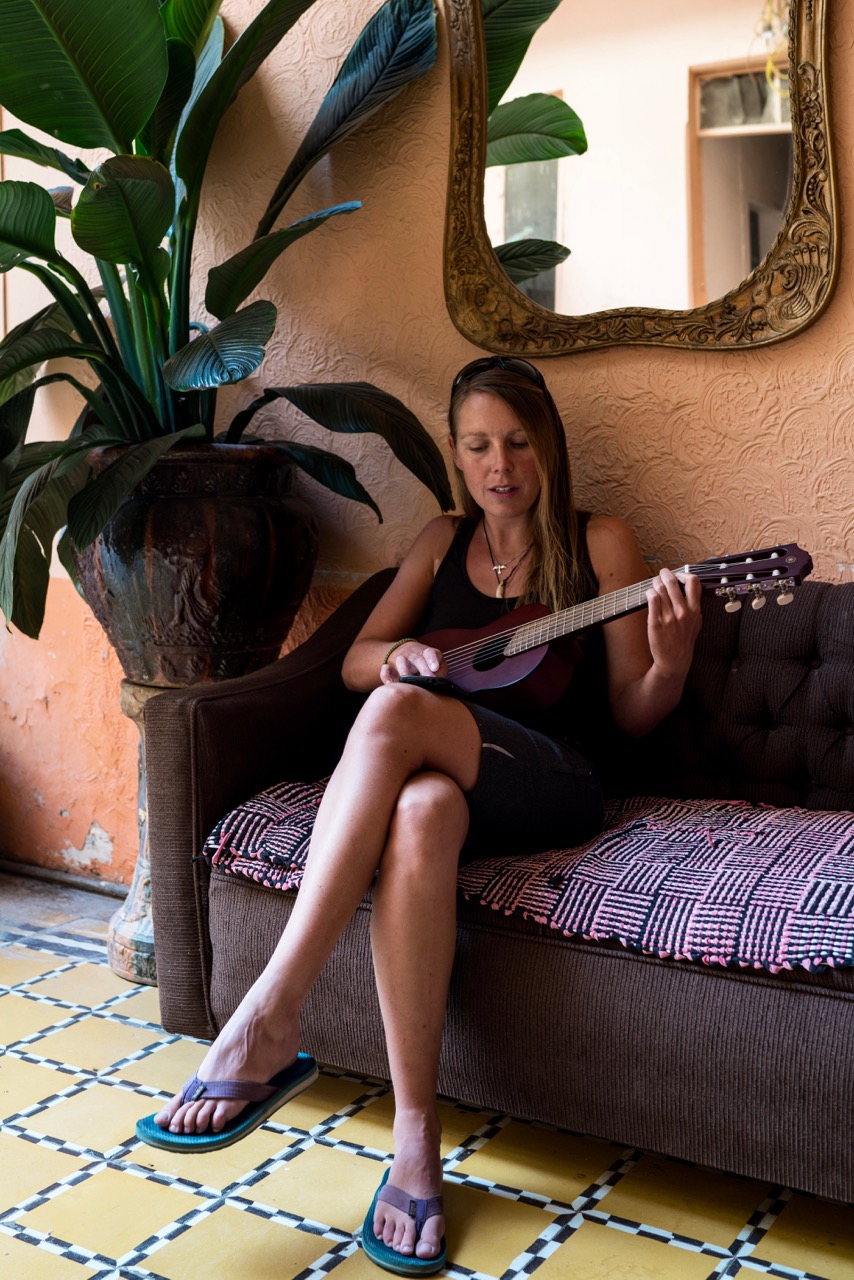 I may have to give up on the extreme bad and bumpy dirt roads that always tortured my back. But I guess that might be more or a blessing than a loss..

From colorful Guanajuato I’ll continue alone again. Eastwards, into the Sierra Gorda and then via the Pyramid del Sol to Mexico stad! 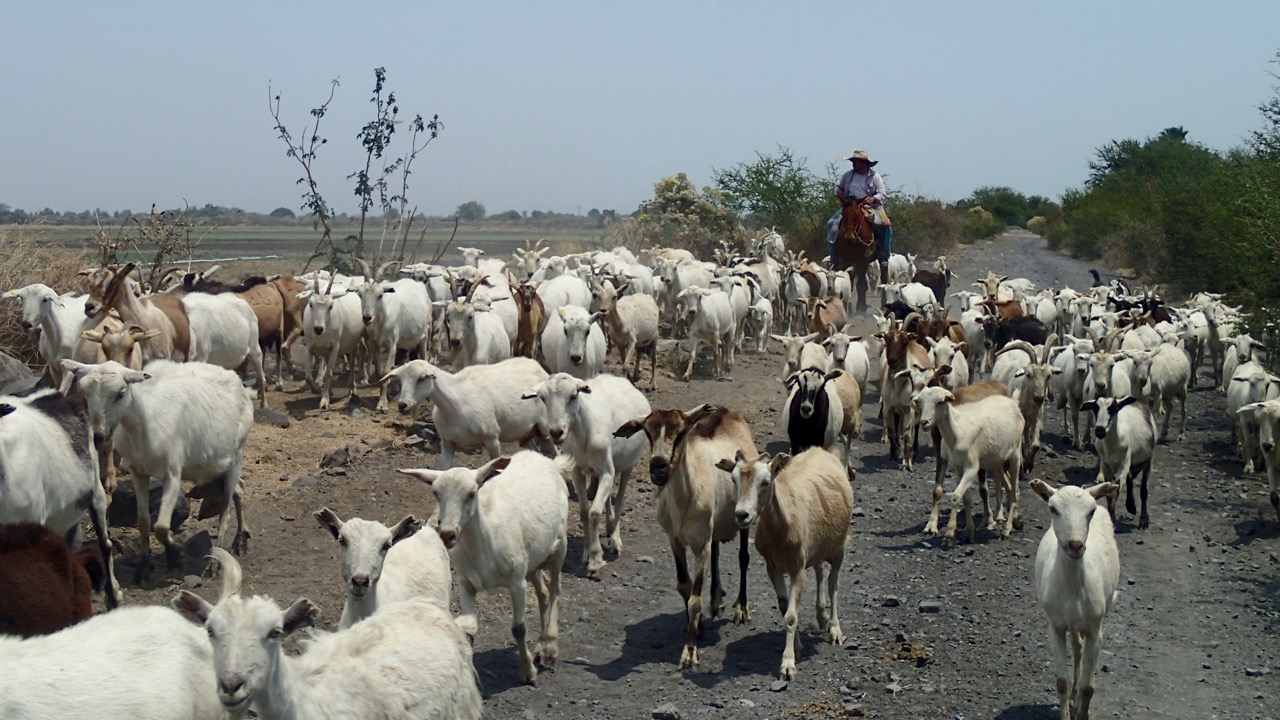 2017 Buyer’s Guide to Road Bikes: Which One Should You Get?

Peter Sagan after Paris-Roubaix: “It Was a Bit of an Unlucky Day for Me.“