What does it take to complete a hard stage at the Tour de France in a competitive time? The basics would be: a great athlete at the peak of their performance, with the support of a professional team, an extremely expensive road bike(s), and a surprisingly large amount of food and liquids. The last item on that list is probably among the easier ones but still far from simple. Let’s take a closer look at race day nutrition of a Tour de France cyclist.

Every Tour de France finisher will burn approximately 140,000 kcal during the 21 days of racing. That amount of calories is equivalent to about 275 Big Macs or 114kg (251lb) of steak or 56kg (123lb) of ice cream, take your pick. Every stage requires about 5,000 – 8,000 kcal a day depending on the difficulty. To have some perspective, an average person who does some cycling for fun will burn only about 2,500 – 3,000 kcal a day. Most of the race day calories come in a form of carbohydrates. For a 70kg (155lb) athlete that could be as much as 1,400 grams. You would need to eat about 55 bananas in one day to get that many carbs. And they also need to hydrate well, which can mean drinking up to 10 liters of fluids a day. These are some impressive numbers, but what are the actual foods that top contenders at the Tour de France eat? According to Henrik Orre, a chef from team Sky, it could look something like this:

A bowl of oatmeal with nuts, a large omelet, three sandwiches with cheese and ham, 100g of pasta, 1 cup of yoghurt, 500ml fruit smoothie, 1 glass of apple juice, 1 coffee. No, those are not the options. All of those items make up a breakfast for just one Tour de France cyclist. 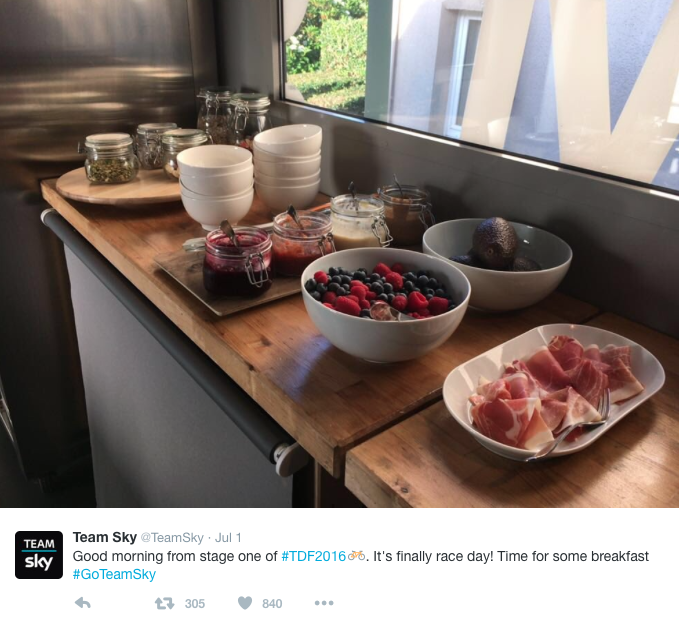 Apple, banana, handful of nuts, 2 energy bars, lots of water, 1 coffee. The point of breakfast and this snack is to try and ingest as many calories as possible before the race to reduce the need for caloric intake when on the bike.

Two croissants with jam and ham, 7 energy bars, 2 isotonic gels, 2 cans of coke, 6 bidons of electrolyte drinks. Energy bars are efficient at replenishing energy, but nutritionists usually include some real food like croissants for texture so that cyclists have an easier time taking all of those calories in.

A piece of chicken, 200g of rice, 500ml fruit and vegetable smoothie, 2 coffees. A nutrient dense meal with a good source of protein after the race is very important to help cyclists get out of catabolism and start regenerating effectively.

A large beef steak, 150g of pasta, 1 cup of yoghurt, 500ml vegetable juice, 2 coffees. Yes, they do drink a lot of coffee. It can improve performance and is not a banned substance. 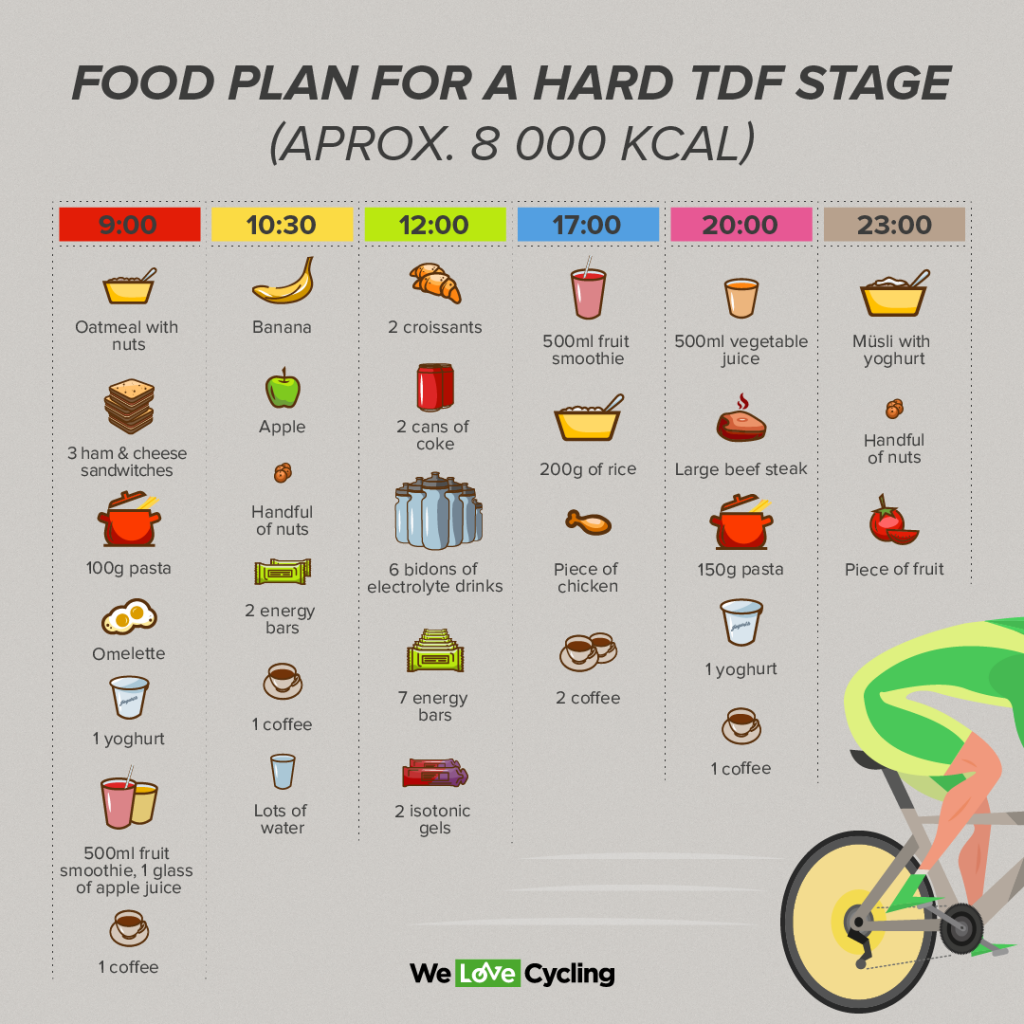 A cup of yoghurt with cereals, handful of nuts, a piece of fruit. Athletes’ body continues burning calories hours after a hard exercise such a Tour de France stage. That’s why it’s important to keep fueling even in the late evening.

Do you think you could eat all of that? This guy certainly couldn’t.

Can Eating Habits Influence the Length of Our Life?