Our Editor In Chief Henrique is a fierce supporter of traditional cycling, so we briefed him to test out some e-bikes. […]

Our Editor In Chief Henrique is a fierce supporter of traditional cycling, so we briefed him to test out some e-bikes. This is the story of one opinion that collapsed like a house of cards.

I have been cycling to work for some time now. Different jobs, different cities, different distances, up and down the hills. But two things still remain the same: my passion for cycling and for my bicycle – grey mountain bike with an aluminum frame.[cite align=”right” width=”40%”]”The vision of myself on the saddle of some “weird” e-bike. This was completely out of question…”[/cite] So far, she (yes, it is a beautiful hardtail girl) has been performing well in almost any type of terrain while offering me enough comfort for my daily journey.

With this picture in mind, I have never ever thought about having another bike. Worse than that would be simply the vision of myself on the saddle of some “weird” e-bike. This was completely out of question.

The truth, boys and girls, is that I was missing a point about electric-powered bicycle. In my ingenious mind, I couldn’t see any reason to have my wheels electrified when I could do the job myself.

Sadly, this thought was completely smashed few weeks ago. While I stopped on the side of the road, waiting for the green light to go off, a smartly dressed man got closer to me. He was riding a nice foldable black e-bike and seemed cool about that. Nothing new so far.

But as soon as the traffic light went green I had an epiphany. With that guy and his electric bicycle leaving me in the cloud of dust with no apparent effort, I realized how useful can e-bikes be for everyday commuters (those who can afford them, of course). These machines are faster than traditional bikes and still maintain their slim design, which permits a good mobility in the traffic. Also, they are light enough to be carried upstairs to the office and yet some of them look great.

With a completely new world in front of me just waiting to be discovered, I had another issue to sort out. Picture this: I was on Eurobike (read more here), the largest bicycle trade fair in the world, and had dozens of e-bikes available to be tested.

I asked myself where to start. This way I set some sort of qualifying parameters to pick the ones I would ride.

First of all, they had to look beautiful. Come on! It was my first time riding an e-bike. I just wanted to get it right. 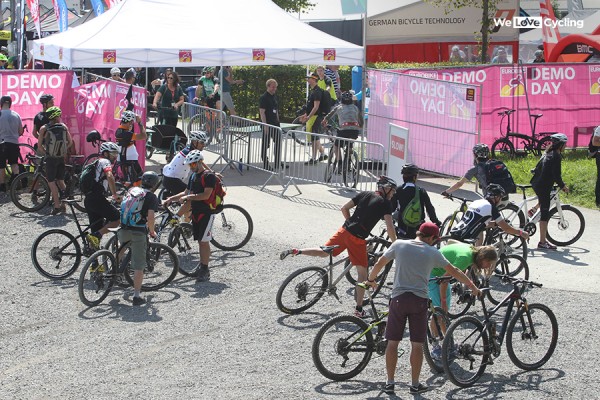 Secondly, they had to be designed for commuters. I still had the picture of the guy by the traffic light with me. He was going to work and needed something to make his life easier. And he had it.

Last but not least, the gadget had to have enough power to support a heavyweight grown boy. That is because I’m not exactly a slim guy although I’m trying to improve this with all my sportive activities.

With these not so scientific demands met, I tried three e-bikes. It is important to state that these test drives were done in a short circuit with not difficult obstacles to overcome. Following are the impressions about each one of them.

This English babe was definitely the most beautiful e-bike among the three I’ve chosen to test. With its futuristic and smart design, Gocycle had almost everything I was looking for but the name. The look was amazing and simple.

It is designed to be carried under one’s arm and to fit in any small corner in the office, house, boat or public transportation – as far as you manage to disassemble its four parts. It seems pretty easy when an expert is demonstrating how to do it, but don’t get fooled by that, ok? Anyway, this should get better after some practicing.

The riding experience was also pretty decent, with prompt response to acceleration and pedal efforts. It is also possible to personalize your ride through a smartphone app. It means you can set the Gocycle’s engine to push harder instead of you. That’s what I did. And I liked it!

For those who want to look nice and show off a little bit!

Out of the three tested models, this is the one which reminds me the most of a bicycle as we still know it. Chain, cranks, gears and even spokes. They are all there. The sensation of riding it also doesn’t change much when compared to a traditional foldable bicycle. Surely, you feel the boost of the electric engine hidden somewhere in the frame. But if you want to go faster you still need to put some effort in it.

Fair enough, as most of the countries in Europe have a speed limit of 25 km/h for e-bikes. If you want to go faster than that, you should have appropriate vehicle, better helmet and also a driving license.

Despite that, this model has a sort of modern look, with its curved frame. But I have to tell you that for an e-bike it is pretty much an old-fashioned one.

When I first touched the last model of Mandofootloose, I had a feeling that that little devil had a secret desire to jump on and crunch anyone that appeared in front of it. Even before I could accommodate myself on its back – I mean, saddle – this lively machine was already threating me with some pushes. I realized I wasn’t riding anything close to bicycle at all. It was more like a tiny electric urban motorbike designed and programmed to look like a bicycle, but it was not.

As I was told, this charmingly nervous toy has this characteristics because of legal reasons – the same ones that justified Stail’s bicycle slower speed. But in this case, the design is a merely a point how to make a quite potent commuting machine look desirable to people.

Ok! I’m not being completely fair. Even with no chains connected to the cranks, the pedals have an important part to play in Mandofootloose. They are meant to recharge the battery a bit and – maybe – to give the cyclist a sensation of riding, by sending the engine a message to run. Nothing else really.

For people who are always running late to work and don’t care much about speed limits. Also could be useful for those who have that hidden desire to release that kind of every day stress.

How to Pick Your Perfect Commuter Helmet of 2021

The Best Cycling Navigation Apps for Your Summer Travels