A mere eight months away, cycling fans have been getting pumped for the first updated Tour de France Femmes since it was announced earlier this summer. A huge milestone for the women’s peloton, there’s no doubt about how high the stakes are and how closely the route, riders, and organisers will be followed as the race details continue to unfold over the coming months.

Naturally, there have already been a few waves of controversy associated with the event—including laments over a lack of stage parity and questions about the prize purse and whether an adapted version of the men’s race should even be held under the same banner. In general, though, the appetite for a multi-day women’s stage race has proven large, and with a talented race director, Marion Rousse, at the helm, anticipation for the event is building fast.

So, as we settle down to take a break from cycling action over the holidays, let’s look at what we know so far about what will surely be an iconic moment in cycling history.

Mid-October, ASO, along with race director Marion Rousse revealed the route for the eight-day Tour de France Femmes—which will begin at the Eiffel Tower and finish atop La Planche des Belles Filles. 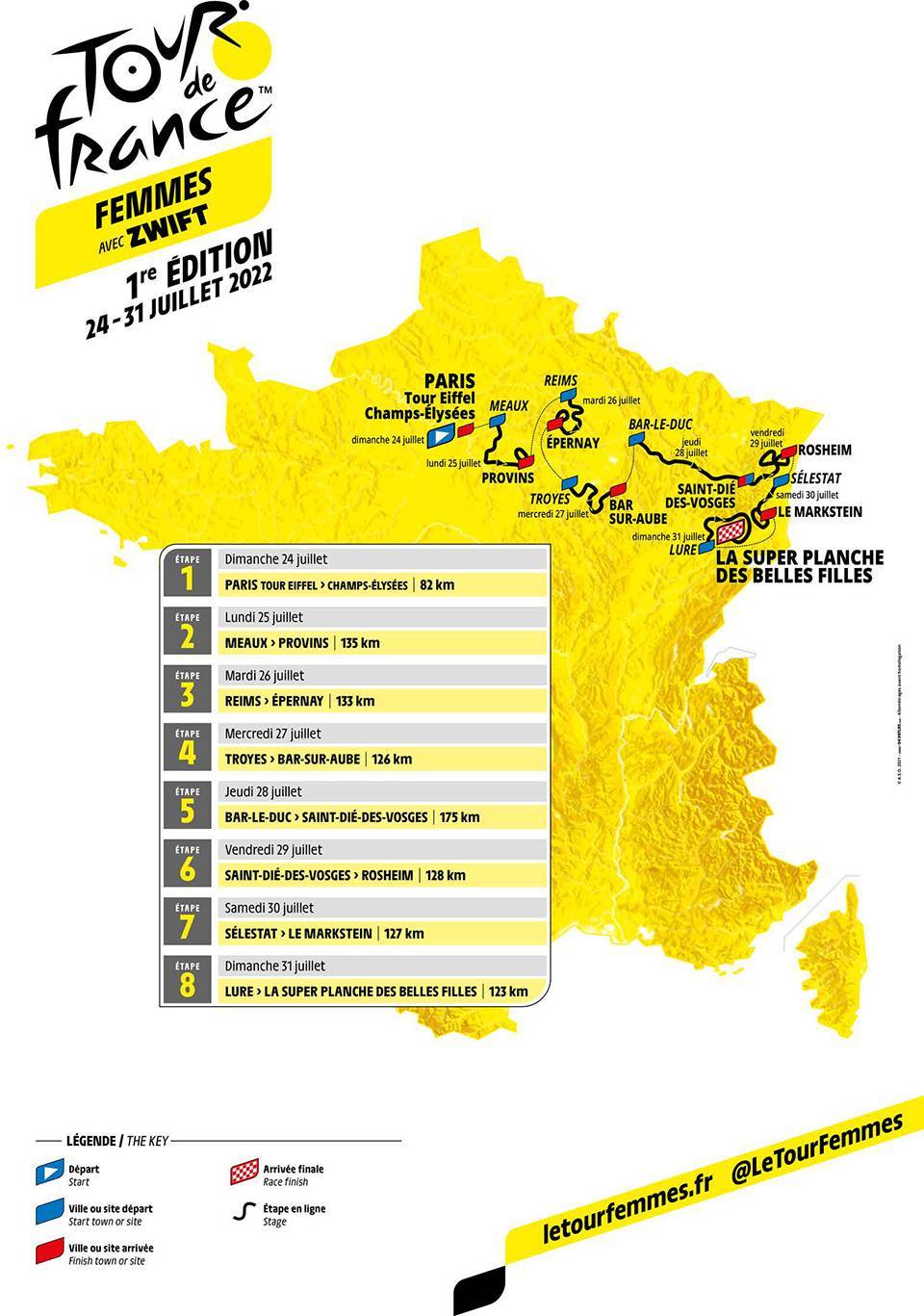 Set to cover 1,029 kilometres and include back-to-back mountain stages, two stages for the puncheurs, a stage packed with gravel sectors, and four flat stages that could either end in bunch sprints or breakaway wins. Here’s a breakdown of the eight stages by length:

Compared to the men’s 21 stages with an average of around 3,500 kilometres, we can’t exactly say we’re looking at the same scale of events. That said, with the stages that have been made available to them, there is plenty to promise that the women will put on one heck of a show

Similarly, the prize fund falls short of parity but it is nevertheless the largest amount that the women’s peloton has ever seen. There will be a total of €250,000 up for grabs throughout the eight-day race, and €50,000 in prize money for the winner. The other €200,000 will be awarded to stage winners, jersey holders and winners, other top general classification finishers, and more.

The numbers do seem to be set—for next year anyway. That said, there has been plenty of pressure on organisers, particularly following the inaugural Paris-Roubaix Femmes.

This October, when Trek-Segafredo’s Lizzie Deignan took the first-ever women’s title and brought home just €1,535 in contrast to the men’s winner who received €30,000—there was some serious blowback. After the race, Trek-Segafredo confirmed that they would match the prize money for Deignan and third-place finisher Elisa Longo Borghini with the men’s equivalent, adding that it was the continuation of a policy they had been carrying out throughout 2021. Whether that’s a sign of where things will be headed with Tour de Frace remains to be seen but the rallying cries were loud and clear.

Despite some initial confusion over the race’s coverage, it has been confirmed that there is an exclusive rights agreement between Discovery Sports and Eurovision Sport. Under the terms, the Tour de France Femmes will be broadcast across Europe in more than 50 markets in July 2022.

Guy Voisin, director of cycling at Discovery Sports, said: “We have made it our mission to invest in more world-class women’s races because it is just great sport, to help grow cycling further and to meet the expectations of our viewers everywhere. We will now harness our deep cycling expertise and unrivalled scale to bring coverage to the widest possible audience in Europe, truly unlocking the power of the sport.”

The long-term TV deal, which runs until 2025, also includes live coverage of Paris-Roubaix Femmes. With this in mind, it is safe to say that Discovery Sports is taking its commitment to showcasing more women’s cycling seriously, further underscored by their showing of every race on the UCI Women’s World Tour in 2021.

In a testament to the solidified position of Zwift and the virtual cycling scene in general, the platform will be the primary sponsor of the Tour de France Femmes. Following a successful Virtual Tour de France last year—run on Zwift across three weekends, and which Lauren Stephens of TIBCO-Silicon Valley Bank won the final stage and overall title—it makes sense for Zwift to play a leading role at the real-life event.

We also like what Eric Min, CEO & Co-Founder of Zwift, had to say about their role: “I’ve long been a fan of the attacking style of women’s racing. I really believe the women’s peloton puts on some of the most exciting bike racing to watch, and it deserves a much bigger platform to exhibit these talents and skills. I’m proud that we can play a big part in making the Tour de France Femmes avec Zwift a reality in 2022. Together we can bring women’s cycling to a larger audience and inspire new generations of female cyclists for years to come.”

Responses from riders and fans

Of course, the women’s peloton is stoked to tackle the route, and there has been a ton of optimism expressed about what it will mean for the visibility and future of the sport.

“This is a huge moment for professional women’s cycling,” said double world champion Anna van der Breggen (SD Worx). “The Tour de France is the most famous race in cycling, and it’s long been a dream for many of us in the women’s peloton to compete in such a race. I’m hopeful that the Tour de France Femmes avec Zwift will help us grow our sport even more by providing us with a media platform to take the excitement of women’s cycling to new audiences.”

Uttrup Ludwig echoed this response, expressing an eagerness to attack the stages and delight in the fact that she’ll finally be able to participate in a race that even her grandma has heard of:

“I’m so excited. I mean, this is a day that we’ve waited for, for a long time. We’re getting our own Tour de France for women, and it’s a great day for women’s cycling. They look like super cool stages. I can’t wait. Let it be July.”

Part of history, indeed. It will also be an essential focal point for inspiring the next generation of women cyclists and athletes more broadly. You can read more about what it means to fans and the cycling community here.

But let us leave you with one quote from Janet Herring who decided to give cycling another chance six years ago at the age of 54, after recovering from treatment, surgery, and chemotherapy:

Hear, hear! Stay tuned for some insight into the inaugural race, including an upcoming profile of race director Marion Rousse.