The route of next year’s Tour de France has been announced, and everyone seems to agree that it has all the makings of a classic. The Grand Départ will take place in Denmark, where it had been scheduled to be held last year before Covid ruined everyone’s party. It ends, as always, in Paris – after 3,328 km (or 2,067 miles) of cycling.

The six mountain stages encompass four mountain ranges – the Vosges, the Alps, the Massif Central and the Pyrenees – and comprise five summit finishes (La Super Planche des Belles Filles, Col du Granon, Alpe d’Huez, Peyragudes and the Hautacam, two more than in 2021. The route also includes a treacherous cobbled stage that is a potential trap for a GC rider’s ambitions, a lot of stages for puncheurs that could encourage multiple breakaways and a very long time trial.

In one word, hard. In two words, very hard. 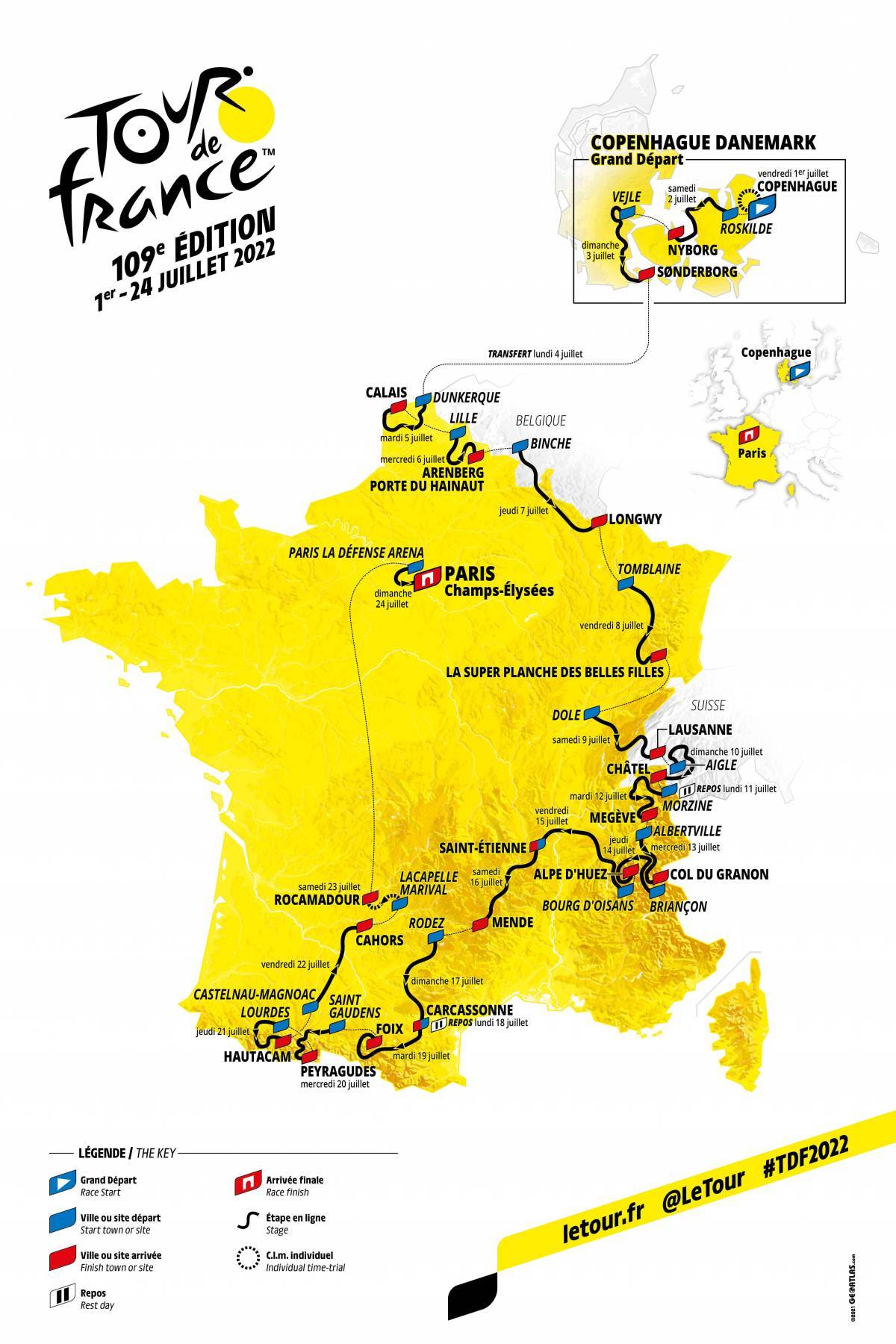 This year’s Tour was not nearly so difficult and yet those riders that survived it were cooked at the end, more so than in previous Tours. The reason? The generation of young and hungry riders who have made riding a Grand Tour more competitive than ever, and have the older riders complaining that there is no time to rest or even catch your breath in a race.

Great. If the Tour de France were easy, everybody would be riding in it.

For such a difficult race, it begins with three relatively benign stages. The race kicks off on Friday, July 1, with a flat 13-km ITT through the streets of Copenhagen. Though short, it should be very competitive because the winner could wear the yellow jersey for at least two more stages, as it is followed by two relatively flat stages that could and should end in sprint finishes. But as we learned this year, the racing has changed to such an extent that we could and should expect the unexpected.

A rest day follows to allow transfer from Denmark to France (which also accounts for the rare Friday start). After what should be (but may not be) a relatively quiet start, the fireworks begin on stage 5, 155 km from Lille to Arenberg Port du Hainaut. The 11 stretches of cobblestones all come on the final 76 km of the stage. Every rider, but especially the GC contenders, will be praying for sunny, dry weather. Whatever the weather, lots of time could be gained or lost here – and that is even more the danger if it rains.,

Two stages later comes the first mountaintop finish, atop La Super Planche des Belles Filles, a 7-km climb with an average gradient of 8.7%. GC contenders will be watching each other without showing their hand. Someone who will not win the Tour could grab the yellow jersey on this stage and hold it for a while.
Stage 12, 166 km from Briançon to the Alpe d’Huez is the next mountaintop finish, a killer of a stage with three long and difficult climbs, including the Col du Galibier. It comes at just past the halfway point of the Tour, so it is probably too early for the GC contenders to make their big play – but a team with confidence and lots of strong riders may feel that this is exactly the time to grab the race by the neck.

My guess is that the Tour will be decided on stage 18, 143 km from Lourdes to Hautacam. It comes after three weeks of exhausting racing and features three hard climbs, with the final ascent, 13.6 km at 7.6%, becoming a test of endurance and will. This is where the GC contenders still in with a chance will want to put some daylight between themselves and two-time Tour champ Tadej Pogačar – because stage 20 is a 40-km ITT from Lacapelle Marivale to Rocamadour that ends with a 1.5-km climb at 7.8%, and everyone remembers how the Slovenian overturned a 50-second disadvantage to Primož Roglič on the stage 20 ITT in 2020 to win his first Tour de France.

The bad news for the GC hopefuls is that Pogačar loves the route. “It’s pretty great,” he told Velo News. “I am really looking forward to it.”

But marvellous talent that he is, Pogačar may not be in the running by that stage any more. Why? Because, as already said, the unexpected is becoming the norm in the Tour de France.

Pogačar Says He Can Be Beaten. Can He Really?

How Do Pro Cyclists Spend Their Off-Season?