Despite collaborating with photographers and film crews, professional biker Richard Gasperotti learned how to use his small action camera to take great cycling selfies. All of the photos below he took on a self-timer mode. Richard explains how to achieve desirable images when riding alone. 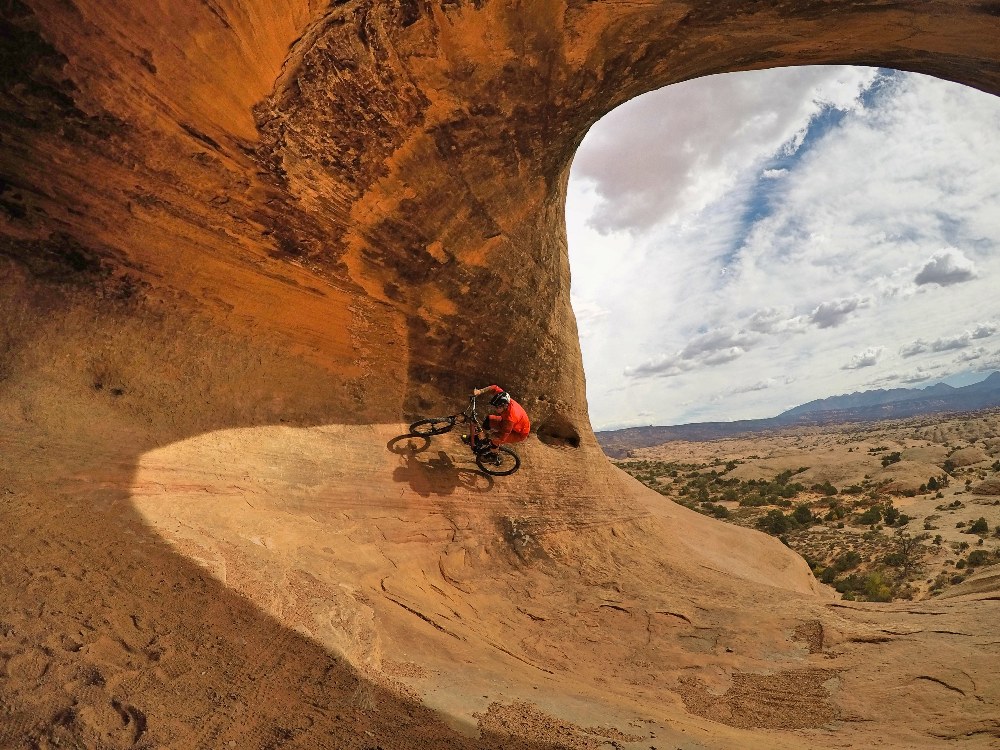 This photo I captured one late afternoon on the GoPro 6 camera set in the opposite corner of the cave. For outdoor shooting, I use a small portable tripod that is easy to store in a bag pocket. The camera features a self-timer that takes a photo each half a second. I only press the shutter release and let it take pictures. The camera creates tons of lame material this way but I pick the good ones and delete the rest. Before adjusting the camera, I consider the composition and try to figure out my position in the frame. It took three attempts to make the final shot depicting me riding the wall over the divide between the light and the shade. 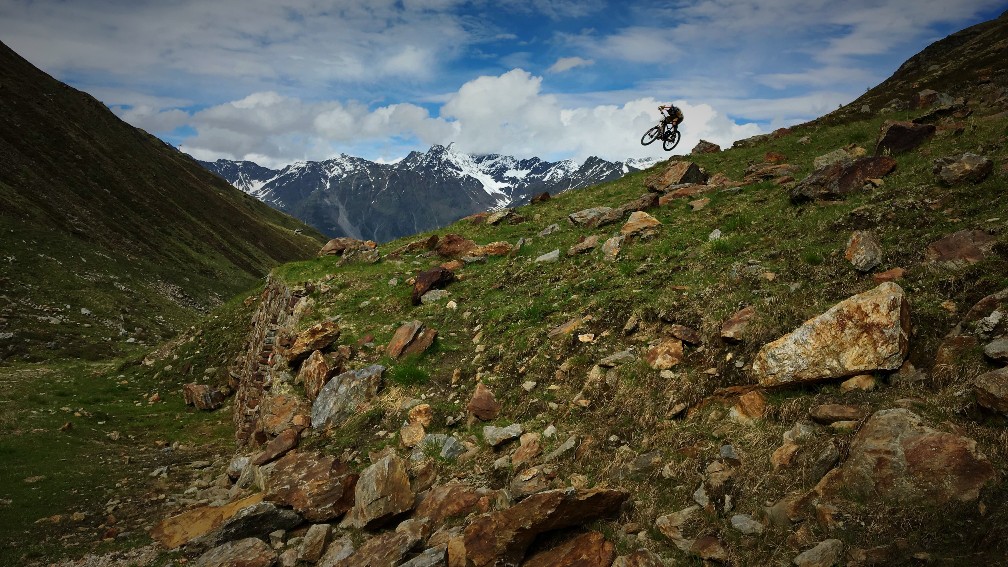 This photo shows that even an average stone in the middle of the trail is easy to turn into a platform for a big take off when you find a proper angle to shoot. Despite flying not even a metre above the ground, the mountains in the backdrop provide the image with an epic vibe. That is an example of a basic rule when making a photo where the sky meets the ground. My advice is to find a trail that enables you to ride the bike right on the horizon, which makes your body and bike silhouettes undisturbed and perfectly visible against the blue sky or white clouds. When seeking a perfect spot, I don’t mind to dismount the bike and spend some time going after a place that allows me to give the camera an unusual perspective. The result is worth it then. The image was taken on a GoPro 7 camera using the same technique as above. I took approximately 270 frames and chose that only one. Cutting a part of the sky in a photo editor changed the composition remarkably. The slopes are now running from the upper corners and the panoramic the size amplifies the final impression. 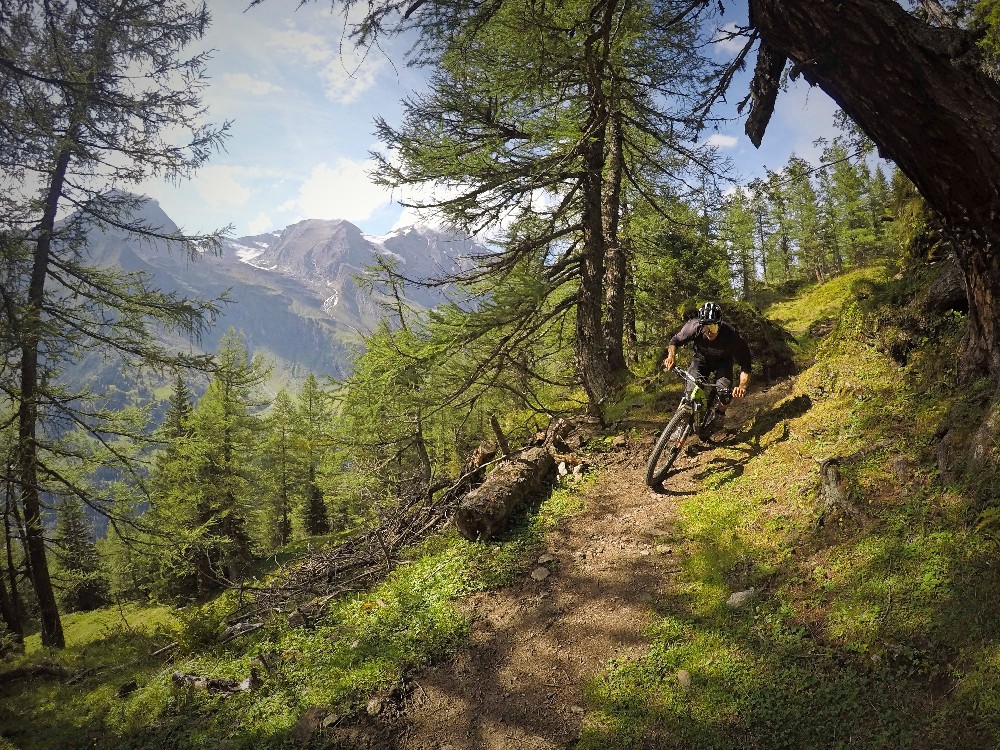 The light conditions are decisive in making great pictures. What I like about the tiny action cameras is their unlimited flexibility. Any time I see the sun peeking over a ridge or when entering a magically illuminated forest, I bring the bike to a halt, fish the camera out from the pocket and shoot a few pictures here and there. Since lots of photos look impressive with the rider facing the camera, I’m not reluctant to stop and take a look behind my shoulder to check how does the landscape feel from the other side. Different angles might surprise you considerably. That’s also how I took this cycling selfie on a camera attached to a tree branch using a piece of duct tape I always carry in my backpack. The best image I’ve selected from about 50 frames. 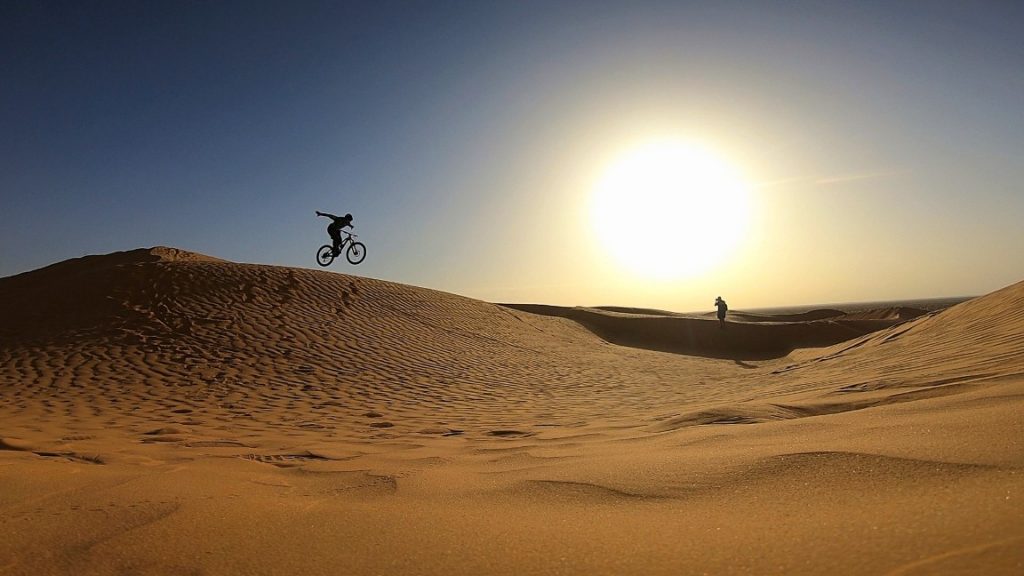 The photo was taken on the GoPro 8 camera during an early-morning photoshoot in the Sahara Desert. Despite the professional photographer who was in charge, I put the action camera on my foldable tripod to create video content for my YouTube channel. A sequence recorded in the best-quality mode enables me to cut stills from the footage with a photo editor app. Even though the final resolution is worse than if the image were to be taken on the photo mode, it is still acceptable for posting as a cycling selfie on Instagram. While positioning the action camera, I always keep in mind the wide angle of the fish-eye lens that changes perspective and turns you into a tiny dot if I put the camera in too much of a distance. 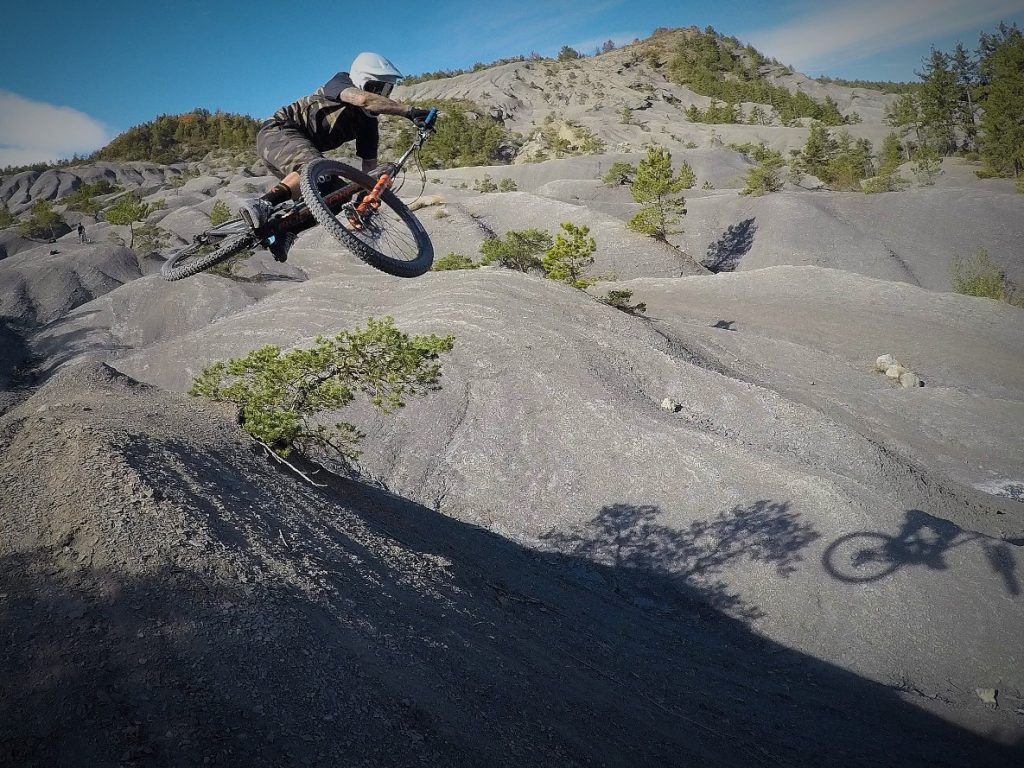 Waiting for the late afternoon was worth it as low sunbeams wonderfully illuminated the whole scene. Before releasing the shutter on the camera hung on a tree, I continually checked the photo scene using the display of my smartphone connected to the camera by Wi-Fi. Standing on the spot of the expected flight trajectory, I moved the GoPro slowly step by step until a perfect composition was achieved, including the shadow cast on the ground. 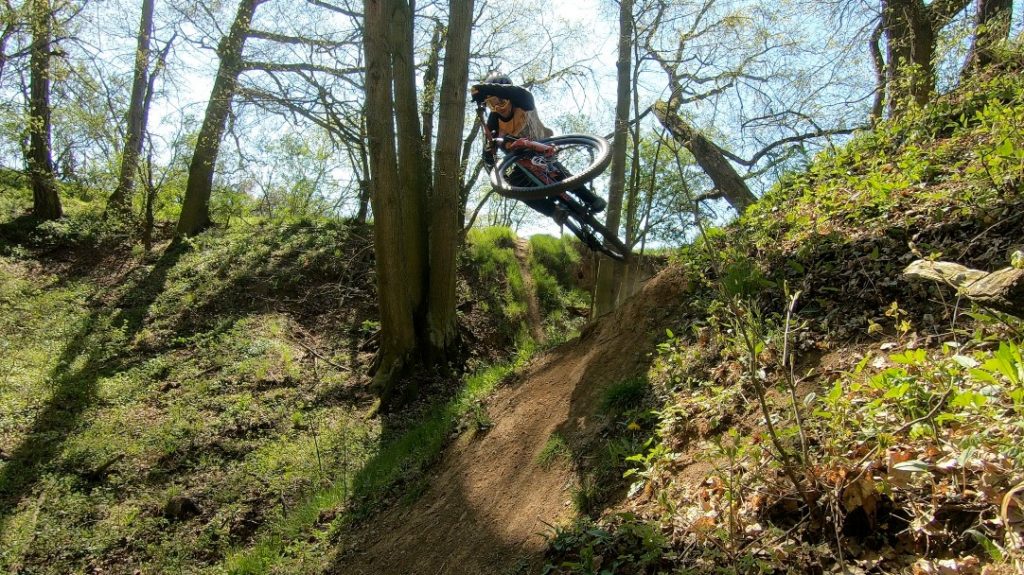 Once again, a single frame was cut out from the video footage taken by my new action camera DJI Osmo. Putting the camera on the ground and letting it take a cycling selfie from below gives you extra height and highlights you against the sky.

Level Up with the Nose Pivot

Tips and Inspiration from a New Bikepacking Enthusiast