When Jeremie Smith started cycling regularly several years ago, it wasn’t to get in shape or reduce his carbon footprint – he just wanted to be able to sleep through the night. His wife Maggie had been diagnosed with an aggressive form of breast cancer while pregnant with their first child and he was looking for a way to exhaust himself so he could escape the fear and anxiety, if for only a few hours.

“Cycling for me is intimately tied to the most trying and frightening experience of my life.”

Four years later, mother and baby are thriving and Jeremie is riding more than ever – having discovered both a new passion and a means of fundraising to help support the people and research that saved the lives of his partner and child.

Cycling to fight the anxiety

Back in 2016, the couple was living in Urbana, Illinois, and was excitedly pregnant after having undergone several years of unsuccessful fertility treatment. Maggie was also preparing to complete her Ph.D., and everything seemed to be going according to plan. That was until the diagnosis came shortly into the first trimester and it became immediately clear that things weren’t going to unfold quite as smoothly as they had hoped. Jeremie credits Maggie for her exceptional bravery and strength in confronting the diagnosis – determined not to let the disease derail everything they’d been working for. Jeremie, on the other hand, was confronting feelings of fear and uncertainty unlike anything he had ever experienced before.

Unable to get his mind off of the ambiguity and struggle that lay before them, he turned to the little-used bike in his garage as an outlet. He explained that “as the treatment proceeded, with a mastectomy at four months and chemotherapy throughout the second trimester, I found myself requiring physical activity to the point of exhaustion just to be able to sleep at night. I found myself riding further and further as my fitness and fears increased.” Using his time on the bike as a form of escape and therapy, Jeremie did his best to remain a source of support to Maggie who continued to steadfastly work towards her PhD while undergoing rounds of chemotherapy.

With the help of an exceptional team of dedicated doctors and healthcare professionals, the couple endured the next six months and tried to focus on the brighter future that awaited them. Maggie remained unwavering in her resolve and progressed through her treatment, defended her dissertation at eight months pregnant, and ultimately gave birth to a healthy baby boy.

As the couple was adjusting to parenthood and trying to process the whirlwind battle they had just survived, Maggie received an offer for a dream job in Columbus, Ohio. Deciding they were ready for a fresh start in a new place, the couple packed up their lives, said goodbye to friends and family and, within two weeks, had arrived in their new home. Although Jeremie, outgoing and social by nature, was a bit nervous about the prospect of being on their own in a new state – fate swiftly intervened to introduce him to a meaningful community and further propel him into his newfound passion for cycling.

The weekend the family arrived in Columbus just so happened to coincide with Ohio’s biggest cycling event of the year – the Pelotonia Ride. An active cycling and fundraising community throughout the year, Pelotonia is dedicated to accelerating innovative cancer research through fundraising and awareness. Their efforts culminate annually in a 3-day event, that was serendipitously winding its way through Jeremie and Maggie’s new neighbourhood as they unpacked their belongings.

Eager to take advantage of this uncanny coincidence, it wasn’t long before Jeremie got involved with the organization. When he started working for Ohio State University, he joined the school’s cycling team, Team Buckeye Peloton, and was soon completing his first century ride. Fast forward a couple of years and Pelotonia has become a family affair. In 2019, Jeremie, who has become team captain, rode another century on day one of the event, before Maggie, proudly sporting her survivor jersey, joined him for a 35-mile ride on day two.

Together, even when apart

Of course, this year’s major group event has been cancelled and the Pelotonia community has had to search for other ways to work towards their mission while contending with the pandemic. When asked whether the trauma he and Maggie had endured helped to prepare them for the challenges of living under COVID-19, Jeremie again points in gratitude to the community around him.

He acknowledges that the first couple weeks of lockdown were long and difficult, as the couple both struggled to adjust to the demands of online teaching while caring for their son at home. Jeremie explained: “I had no time to go for a ride and it was clearly starting to take a toll. I realized I needed to make it a priority to get out on my bike.” Looking to connect with other cyclists who might be able to empathize, he joined a Facebook cycling group, the Social Distance Cycling Club, which was established to provide a safe place for people to connect and practice safe cycling during these difficult times. 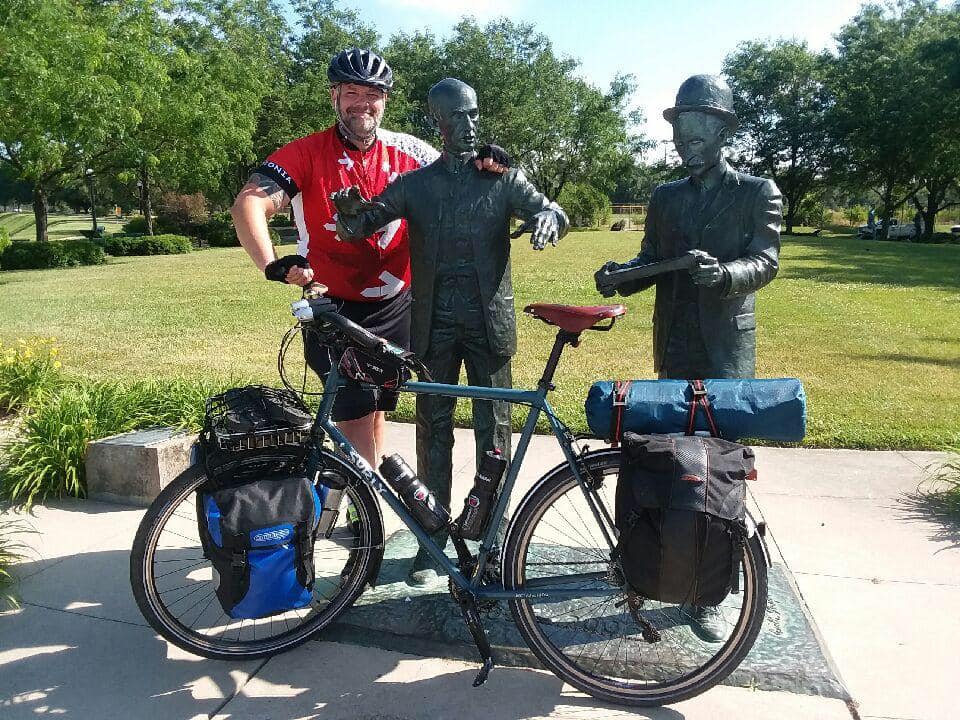 Jeremie was immediately impressed with what he encountered. “For me,” he said, “this group fulfils one of the promises of social media – it actually brings people together. It was so nice to realize that for many people, cycling is more than a leisure activity, it is something we rely on to get us through hard times.” Attesting to the importance of community, the group now has close to 7,000 members that have committed to encouraging each other to get outside and ride a bike in a safe, appropriate, and socially distant way.

Of course, Jeremie’s cycling endeavours also remain focused on his Pelotonia fundraising and he took the opportunity this year’s unique circumstances presented to set a more specific and personal goal.

Cycling as a way to give back

Undertaking a challenge of deep personal meaning, later this autumn, Jeremy will ride from his home in Columbus, Ohio to Urbana, Illinois, the location of the Mills Breast Cancer Center and the caregivers that saved his wife and unborn son’s lives. He will do this 345-mile ride over three days, self-supported and limiting social contact by camping in state parks, limiting supply stops, and keeping apart from others. Arriving in Urbana, he plans to drop off Thank You cards from his family for the workers that got them through the most frightening period of their lives. Jeremie is looking forward to this “ride of gratitude,” and said that, “it will give me time to reflect on the last four years of Maggie’s recovery and will also be a genuine physical challenge.”

A simple, yet incredibly profound way to combine a sport he loves with a cause he cares deeply for, there’s no doubt that his friends at the Social Distance Cycling Club and Pelotonia will be enthusiastically cheering him on. You can also support Jeremie’s fundraising efforts here.