With a woman crushing the bicycle speed record this week, and ONE Pro Cycling Team recently announcing that they’re dropping their men’s team in favour of promoting their women’s program, we are starting to wonder if there is anything that women can’t do on a bike. Raise £25,000 for a local cancer charity for example? Well, they can do that too.

The link between cycling and fundraising is a strong one. These events are a great way to test yourself while helping out a worthy cause. In fact – many people get serious about their cycling routine after committing to take part in a charity ride. Although not everyone who participates in a cycling fundraiser stays hooked after the event, some discover a lifelong passion that keeps them riding and raising for years to come. This is what happened to Deborah Cundy.

Now a prolific fundraiser, life coach, and business manager based in Sheffield, UK, Deborah Cundy wasn’t always so sure of herself and her athletics ability. After struggling with her weight as a young girl, Cundy decided it was time to break her unhealthy habits when her mother suffered from a heart attack in her early forties. She committed to a healthy lifestyle, lost weight, and her confidence blossomed. She had recently fallen in love and everything seemed to be going her way, when her father, to whom she was very close, was suddenly diagnosed with an aggressive form of cancer. The process of grieving threw her back into old behaviours and soon she was neglecting to exercise and eating poorly.

Facing the same set of obstacles for the second time, she knew she needed to get back in shape if she was going to lead the life she wanted. It was at this point, while searching to change old habits with a new determination, that two things coincided which would change the course of Cundy’s life. She took over responsibility for the fundraising mantle of a local cancer charity, and she bought a bike. Cundy fell in love with cycling fast. As she explained to We Love Cycling, “before long, I was riding about 5-10 miles a day and I decided to take on my first real cycling challenge, the 17 miles around the Derwent Reservoir to raise money for cancer.”

She noted that at first, it was a bit of joke amongst her co-workers, about whether or not she would be able to complete the track. She persevered and suffering aside, she immediately knew that the sacrifice was worth it.

She explained that this event, “set the ball rolling for many more years of fundraising. I found it helped me focus on goals that I could break down into smaller steps so that I always felt I was achieving something and giving back to my community.” 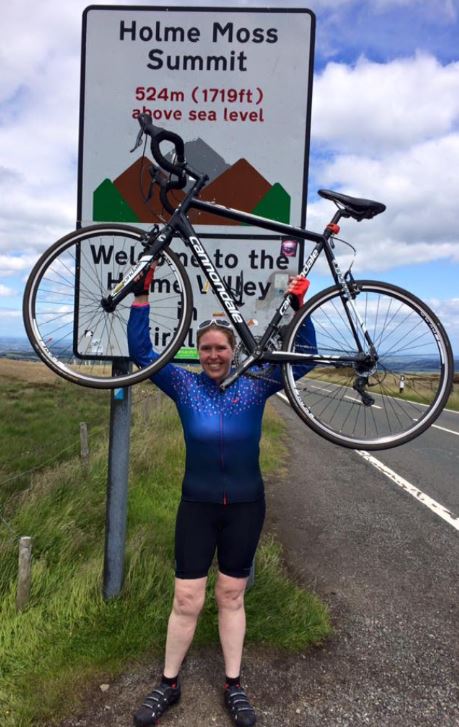 Cundy went on to organize a one-off team to celebrate 20 years of the Weston Park Cancer Charity ¬– Team 20, composed of cancer patients in remission, affected family members, and other concerned cyclists, raised over £2000 in 2014.

Following this success, the Tour de France passed through her hometown of Sheffield, and after witnessing the ferocity of those riders, Cundy knew she wanted to get into road cycling. She learned her body could push upwards of 100 miles a day and has since raised £25,000 for Weston Park Cancer Charity. “Weston Park has been a huge part of my journey,” she told us. “Unbeknown to them, they have helped me to reach my goals and meet so many wonderful people.”

Cundy is one of many who have discovered the rewarding link between cycling and raising money for a cause. As so many feel that they have personally benefitted from the sport, they want to find a way to give back and, like Cundy, cycling for charity has led to the discovery of a whole new dimension of satisfaction on a bike. The Important Role of Mentorship in Women’s Cycling

If you’re looking to get involved, chances are there is a fundraising cycling event happening near you sometime soon, you can also contact a charity you believe in and discuss planning your own event.

Final words about cycling and fundraising from Cundy?

“I have transformed my life with the right mindset and changing old habits for new ones. Setting clear goals and working towards them, whilst making a positive contribution to the local and wider community.” Introduction to Cycling in Autumn and Early Spring Gluten-Free Diet – How to Do It Right