You may remember a short video from 2015 showing members of the Syrian national cycling team trying to start over in Berlin. With the help of a former rider Dieter Stein, they were given loan helmets and jerseys and allowed to train at Berlin’s velodrome. The coach is smiling, the guys are smiling, a heartwarming short video leaves you believing in the positive side of the world. Five years later, one cannot help but wonder: what happened to those people and where are they today?

When a couple of Syrian refugees knocked on his door, telling him they googled him and thought he could help them get back on the track, Dieter Stein respectfully declined. With no bicycles and no German, their situation did not seem, well, exactly promising. But there was something he didn’t notice right away. Despite the lack of gear and language skills, the group of young Syrians had one extra trait: persistence. And, as it often does, persistence paid off.

After several visits to his house, Stein finally gave in. He managed to provide the boys with a couple of jerseys, old steel track bicycles and a place to train: a velodrome in Berlin. He called a couple of journalists and photographers to shoot the whole thing and went home. Expecting this to be a one-time thing, he’s surprised to be seeing them riding each week and ultimately, he contacts his friend, Frank Röglin, asking him if he’d be willing to coach them. Yes, he would.

When it came to the migration situation in Germany, Röglin may have been uncertain about the integration of so many newcomer individuals. But when it came to being possessed by cycling, that was something he understood with absolute certainty. He didn’t see just another refugee group: pedalling on the velodrome were young athletes, ‘all about the ride’. The ‘boys’, as he began calling them, resembled his younger self and the eagerness to ride. That’s why, in a couple of months, he raised enough money to provide his boys, now members of team Luisenstadt Berlin, with entry-level road bicycles.

Coach Frank, as they would later refer to him, surpassed the role of a coach and became a father figure of sorts, helping the fellas learn German and navigate the endless sea of forms and applications coming their way each and every day. When it came to racing, the bureaucracy got even more complicated. To attend races outside Berlin, the asylum seekers had to apply for permission at the local authorities. When they were granted permission, they still couldn’t get in a car and drive to the destination. There was no car, no money to pay for the gas anyway.

Becoming part of the scene

However, the guys soon became a part of the stadium routine. Local riders got used to seeing them on the track on a regular basis. Soon enough, they approached them asking to join their training. Finally, their identity transformed from refugees to fellow athletes: something that made the stadium a place of comfort.

Yelmaz Habash, Nazir Jaser, Nabil Allahham and Tarek al-Moakee from team Luisenstadt soon entered their first race and shortly after began appearing on each race organised in Berlin. One day, an organiser of one of these races called Frank, asking why those talented racers rode such cheap bikes? After learning about their story, he decided to help. It took a week of fundraising, and the boys received new high-end carbon frames and brand new ‘shop4cross’ uniforms. The good news kept coming. Finally, all of the guys have been officially recognised as refugees. That allowed them to finally find a job and travel freely across the country.

In 2019, the former Syrian national racers joined the amateur cycling team PAINTRAIN. Soon enough, Nazir Jaser made his way to the front and became the yellow jersey-wearing leader in German national races. In September, he even joined the individual time-trial at the Cycling World Championships. As an amateur rider and a full-time employee, he knew he could not fare against riders such as Geraint Thomas or Primož Roglič. But it certainly marks one of the greatest sporting feats of his life. These days, the guys still train with their team, probably getting ready for something big. We’re definitely excited to see it! 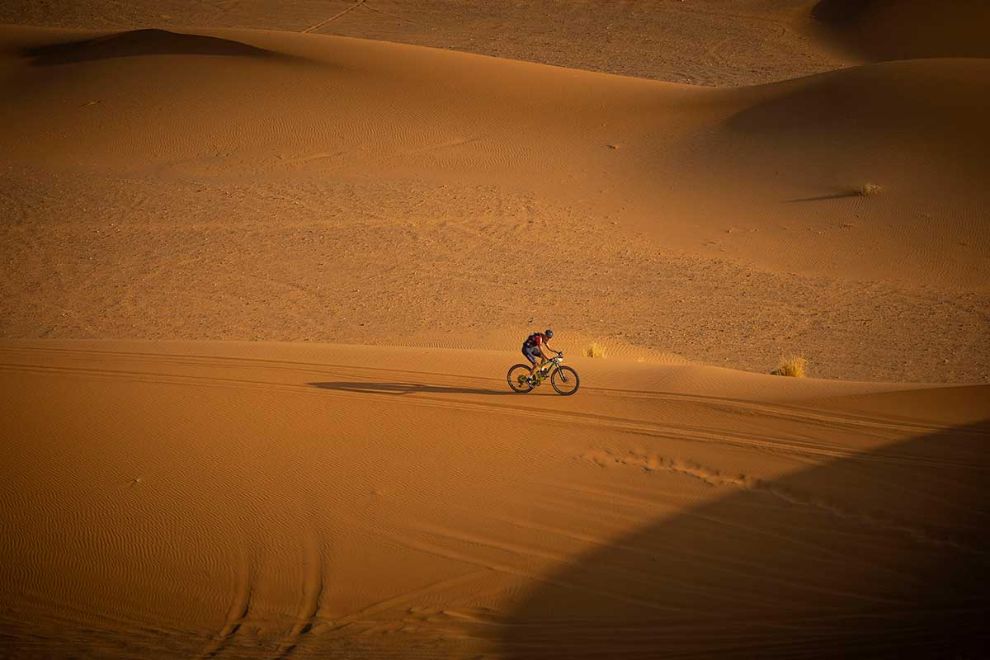 How to Ride in the Desert

How Do Pro Cyclists Spend Their Off-Season?

ŠKODA Service Team to the Rescue: The Red SUPERB iV Gets Fixed a Mere Day Before the Tour Starts