Most bicycle races are demanding, exhausting or tailored to supermen. Not the case of the races listed below. They are crazy, hilarious, ridiculous, entertaining and, on top of it all, extremely sophisticated. Even if you can travel and join the original events, you might get inspired and arrange a similar weekend race for your friends.

Where: Oosterscheldekering storm barrier, the Netherlands

What: The traditional Dutch Headwind Cycling Championships take place in the southern Netherlands, on the coast of the Zeeland province. The 8,5-km-long racing route stretches on the Oosterscheldekering storm barrier running along the beach. Only single-gear bikes are allowed and all of them must be delivered by the organisation arranging the event. Despite the massive interest among Dutch cyclists, a total number of only 300 individuals (or 25 teams of four riders) is picked from the list to participate. The annual time trial with a tradition rooted in 2013 is normally announced three days before the expected storm in the period between December and March.

What had once started just for the amusement of a handful of enthusiasts has turned into an event with 1,200 registered participants but the ultimate goal of the race has remained the same. The riders are required to reach the finish line placed 1,611 meters above sea level after a demanding climb, using bicycles with ridiculously tiny wheels. The rules only allow for using the so-called Pony bikes in their original state, which means steel frames, 20-inch wheels and, at least, a rear brake. Despite the elated atmosphere, it costs the participants lots of effort to make it to the finish line. 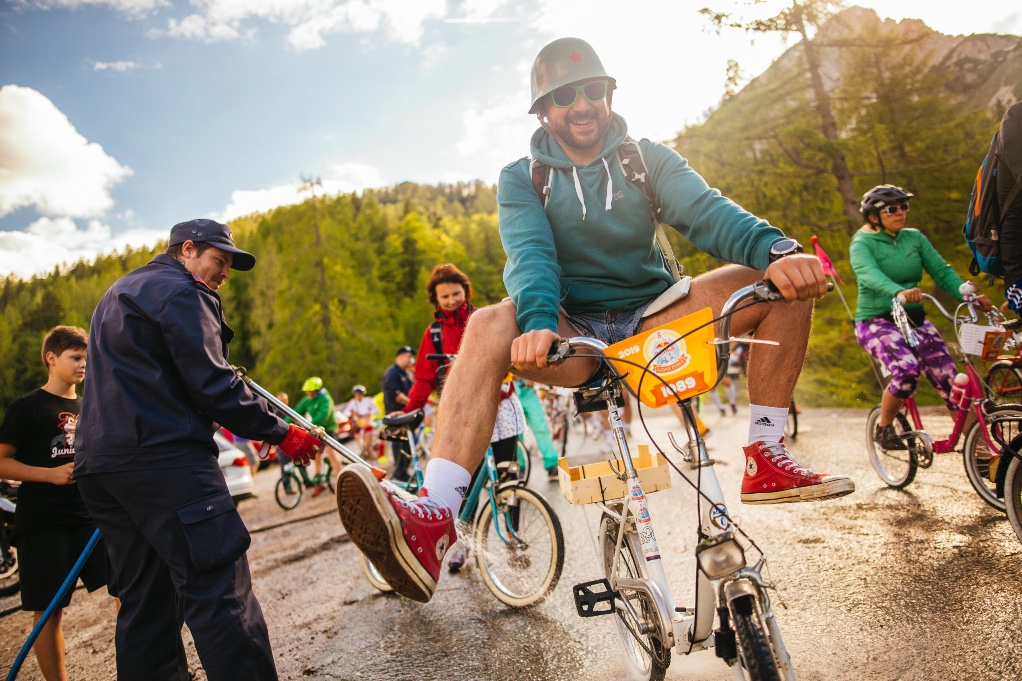 What: The idea of bog snorkelling was conceived in a pub by a lad called Gordon Green and his mates in 1985. Since then, a bunch of enthusiasts started to race in mud while using standard diving gear. Twenty years later, they found out that the event is still not amusing enough and added a bike to the show and the World Mountain Bike Bog Snorkelling Championships were born. Each competitor starts with a mask, snorkel, and scuba, riding a specially adjusted bike. The frame is filled with lead and tyres with water to ensure the bike stays beneath the water surface to run smoothly on the bog bed. The racing route consists of a 60-meter trench that the scuba-cyclists must ride through back and forth.

What: It’s kind of a serious sprint race with a weird beginning. It takes place at a velodrome and starts at the fourth turn, only a dozen metres ahead of the starting line. The cyclists must wait on their bikes, carefully balancing, until the bell chimes somewhere between the third and fourth minute of the race. Before that sound, they’re not allowed to either dab a foot on the ground or to cross the line – both meaning they’re out of the game. As soon as the bell rings, the race is on and the reaming riders set off. The rest is like every average one-round sprint. The fastest takes the win and that’s it. The original race is not running anymore, however, everyone is encouraged to arrange a race according to the Marymoor Crawl rules on their local velodrome.

Bring your own big wheel

What: Introduced by Louis Marx and Company in 1969, a ‘big wheel’ was a type of low-riding tricycle with a large front wheel. Since they were popular toys in the 70s, many people remembered having a good time riding them in their childhood. When a crazy man named Jon Brumit started racing them down Lombard Street in San Francisco in 2000, it didn’t take much time to persuade hundreds of enthusiasts to join the event. He chose Easter Sunday to ride down the curviest street in town, which was later replaced by the less famous, yet even curvier Vermont street.

How to Start a Bike Brand: Asian Bike Market Explained

New Research: Your Heart Is Safe Even With Extreme Volumes of Exercise