Building a MTB trail is a creative process. While Strava sections had existed long before road cyclists discovered them and used their ornate imagination to give them names, mountain biking trails were usually built from scratch. There had to be a trail builder that explored the terrain, designed the trails and then spent hundreds of hours cutting the bush, digging the earth, shovelling the dirt, drilling the wood and moving the rocks to make a perfect line. As the idea of trail building for MTB riding emerged in North America in the 90s, many legendary trail names come either from British Columbia, Canada, or from the USA. However, we added names from other parts of the world to the list too.

Downhill trail with wooden bridges, rock sections and steep parts was created in 1992 by legendary trail builder Todd Fiander, who’s known as Digger in the community. Even today, the North Shore MTB trail engineer regards this trail as his masterpiece. A must-ride for anyone visiting Vancouver and the North Shore MTB area, even though two black diamonds of technical difficulty are a warning that this North Shore classic is nothing for beginners.

An encounter with a Black Widow is nothing unusual when you cycle in Utah. Even though a bite by this venomous spider may cause nothing more than pain and swelling, people are afraid to encounter a Poison Spider. Beside a Poison Spider Bike Shop, there’s the legendary Poison Spider Mesa Bike Trail in Moab, attracting riders for its eye-popping views, ochre slick rocks and rocky ledges.

When mentioned in cycling media, editors usually change the name to the more acceptable “Severed Penis.” Even though you may often come across the shortened form “Severed”, locals insist on the original name. 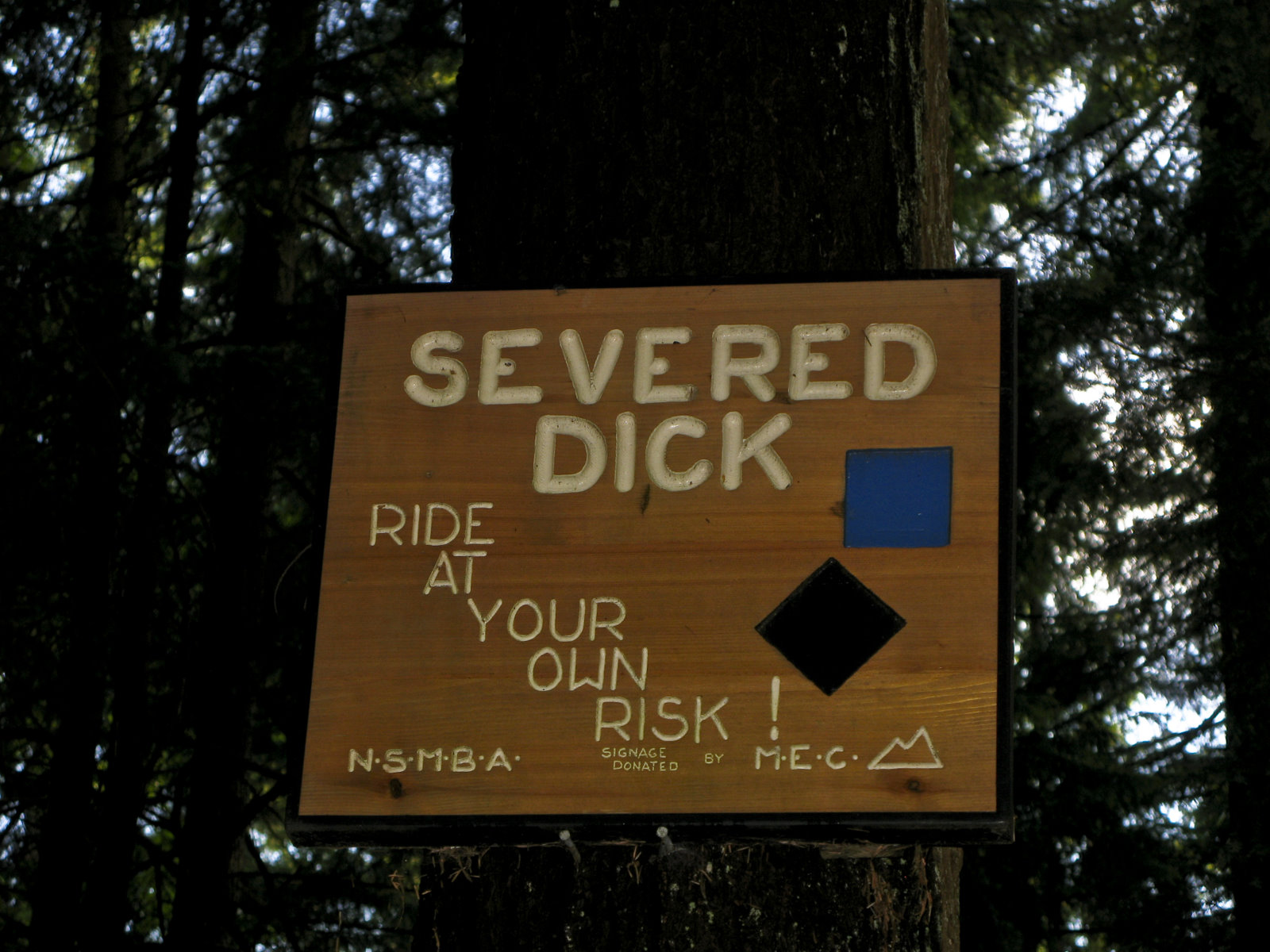 The self-explaining name tells everything to anyone coming to check the trail for the first time. Imagine an injured rider at the emergency, describing where they got hurt.

Kill Me Thrill Me

A trail offering roots, rocks, wooden bridges, exposed rock and some flowy sections had been designed long before Whistler Bike Park was built, so it deserves its reputation of one of Whistler’s classics. Despite the terrifying name, the trail is labelled one black diamond, meaning you can ride it without getting killed.

Finale Ligure is a perfect destination for downhill riders throughout the whole year. Even in the winter months, local guides will shuttle you to the top of the mountains from where you can enjoy a perfect ride down almost to the sea coast. One of the most popular trails is called Rollercoaster. The trail earned its name for an endless number of fast and flowy sections resembling a ride on the rollercoaster.

Road gaps, big jumps, great doubles, slippery roots and much more awaits you if you dare to tackle one of the most difficult runs in the Bike Park Brandental. In order not to get sued by the infamous Hollywood star, the designers modified the name just the right amount to still clearly indicate how much you can get smashed if you miss a landing.

Designed by the local builder Dimitri Kapitanchuk, the trail might bite you like a shark if you crash on the teeth-like sharp rocks. Even though the rest of the trails have Russian names, this particular one has an English name in honour of the Jaws Movie directed by Steven Spielberg in 1974.

Described as a bone-jarring route with a sweet singletrack finish, this 24-km-long trail is a must-do on any mountain bike bucket list. Rather than encountering a porcupine, the animal that once gave name to the trail, you will wish you had brought more extra water to this beautiful, yet extremely dry environment. Master Your Trail Skills: Tips for Riding Over Roots with Confidence