From Nice to Paris, the course of the 2020 Tour de France will never leave the French borders. It will feature the Alps, the Massif Central, the Pyrenees, the Jura and the Vosges. There will be four new climbs: Col de la Lusette and Suc au May in the Massif Central, Col de la Hourcère in the Pyrenees and Col de la Loze in the Alps, featuring Col de la Madeleine and its sinuous road. There will be only one time trial, an individual one. And it will take place on the penultimate stage from Lure to La Planche des Belles Filles, covering a distance of 36 kilometres. All in all, the route looks like one that will be hard to keep under control for the likes of Ineos and Jumbo-Visma. We can’t wait for it all to start! 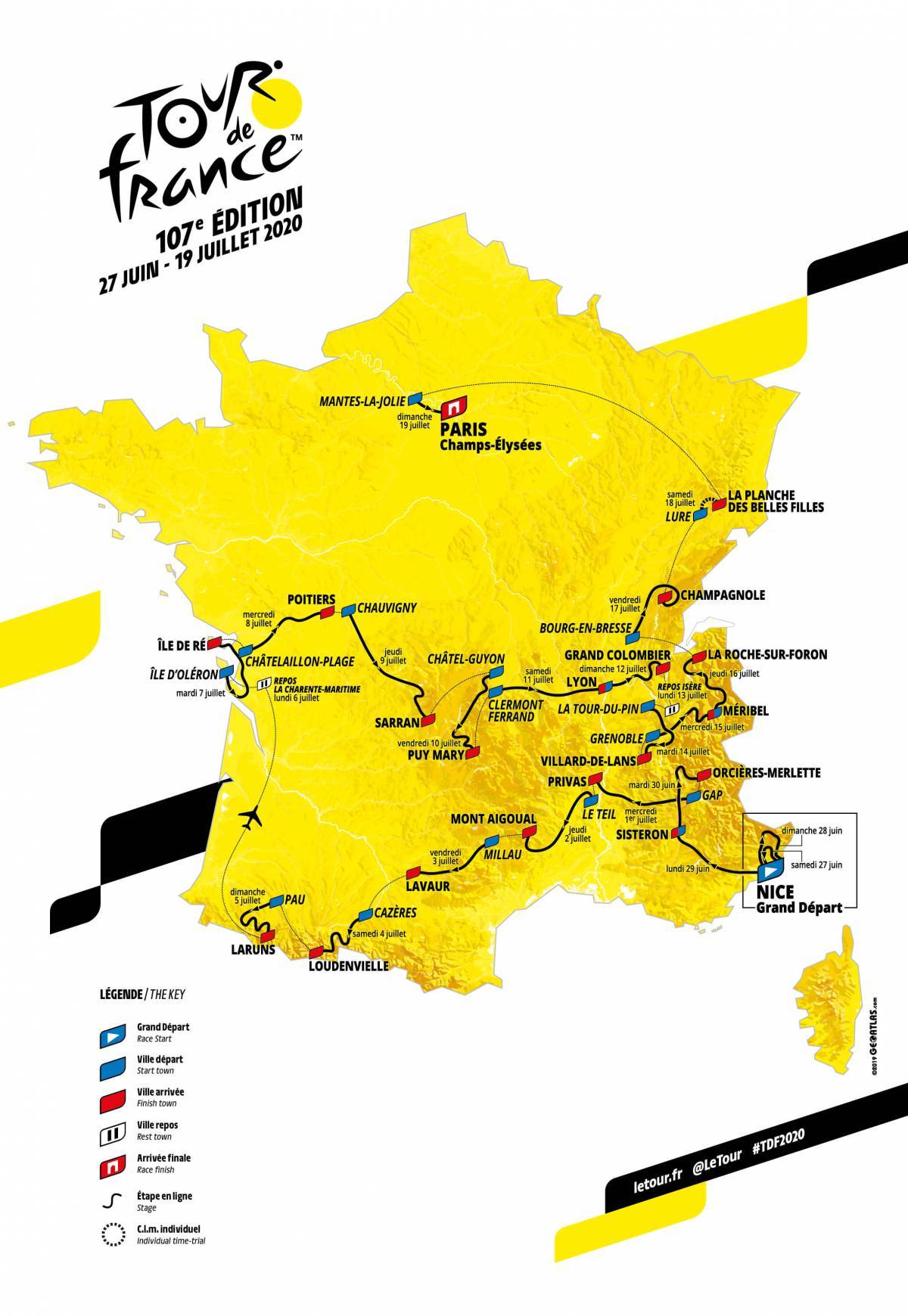 Christian Prudhomme: A rather unfamiliar format, perfect for a great popular show: three loops in the hinterland of Nice, including one to be covered twice, giving the spectators an opportunity to see the pack go by throughout the day before possibly witnessing the first act of the great battle between the sprinters. A bunched sprint is indeed expected at the end of the long final straight on the Promenade des Anglais.

Christian Prudhomme: The sprinter having captured the Yellow Jersey the previous day will be in a tricky situation as soon as the climb up to the Col de la Colmiane and will then have to face the steep turns heading to the Col de Turini and eventually head up to the Col d’Eze. A mountain stage with two passages at over 1,500m as soon as the second day of the race, that’s a grande première.

Christian Prudhomme: The riders might be inspired by the perfumes of Grasse as they leave the Nice area. They will then ride along the Route Napoléon with far less obstacles than the ones witnessed by the Emperor after returning from exile on the Island of Elba. The flat final part as we get closer to the Sisteron Citadel shouldn’t trouble the plans of the sprinters’ teams.

Christian Prudhomme: An altitude finish as early on the Tour is extremely rare. The Grand Départ in Nice allows the race to evolve rapidly in the spectacular scenery of Hautes-Alpes. The day’s program with a first hilly excursion in the Dévoluy mountains isn’t made to split the pack too much. But the final climb to Orcières-Merlette, 1 800 metres high, should give some precious information on the state of form of the favourites.

🔊 🇬🇧 Chris Froome predicts a difficult but open #TDF2020. Here is what he had to say. pic.twitter.com/Aplx4zoqN8

Christian Prudhomme: The journey through Provence will take the riders on the lands of olive trees as they go past Nyons and then to the kingdom of “nougat” in the city of Montélimar. But once in the Rhone Valley, the cycling speciality really is the bunched sprint. At the end of an uphill false-flat road on several kilometres, the one in Privas will concern the finest of specialists.

Christian Prudhomme: The finish at the Mont Aigoual will be situated on a vast “plateau” on the borders of the Gard and Lozère departments, The steepness of the road to reach it will give the day quite some excitement especially after taking on the climb to the Col de la Lusette after leaving Le Vigan. At the summit, around 15 kilometres will still have to be covered to the get to the finish line. A day when the favourites will have to remain extra focused.

Christian Prudhomme: In the areas of Aveyron and Tarn where one doesn’t quite know what “flat” means, the roads are never easy. Other than the hilly course, before visiting Castres, the plans of the sprinters’ teams could be troubled by the wind that can be very strong in the region.

Christian Prudhomme: The first Pyrenees stage was designed on a course that will be both dynamic and demanding. In less than 100 kilometres, the riders will have to reach the Col de Menté followed by the Port de Balès and the Col de Peyresourde. A fine downhiller could then have the opportunity to make a difference on a descent of around ten kilometres to the finish.

🎙 "It's a course suited to attackers, and also appealing to the fans."

Christian Prudhomme: The mountainous program of the day starts with the discovery of the Col de la Hourcère which will immediately precede the climb to the Col de Soudet. For the seventh time since the beginning of the Tour, the riders will ride at an altitude of over 1,500m. They will then battle it out on the extremely steep climb up to the Col de Marie Blanque before heading back down to Laruns.

Christian Prudhomme: Two islands linked by a stage of the Tour, that’s already a first for the peloton that will find it hard to make it bunched to Saint-Martin-de-Ré. The stage will be marked by the Vauban buildings in Royan, Rochefort or La Rochelle, but also by a course mainly set by the sea… and the crossing of marshlands swept by wind.

Christian Prudhomme: The Tour bids farewell to the ocean. The 2020 Tour leaves the coast and enters the deeper French territory through the marshlands of Poitou. The scene is set for a bunched sprint in Poitiers with a final 1.5-km straight that could suit Arnaud Démare, winner in that town of his for French National champion’s jersey back in 2014.

Christian Prudhomme: The longest stage of the 2020 Tour will first take the riders on the roads of the Vienne and Haute-Vienne areas. But it’ll be in Corrèze that the most ambitious could give it a go on the final difficulty, the Suc au May that shows up on the course when the legs will be heavy.

🎙"On the final Friday, we will still not know who will take home the Yellow Jersey." Thibaut Pinot gives his thoughts on the route of the #TDF2020.

Christian Prudhomme: The journey through the Massif Central will for the first time finish at the Puy Mary and will feature the biggest elevation gain of the 2020 Tour with a total of 4,400 metres of climbing. Before taking on the final climb, the riders will have to deal with the Col de Ceyssat and the Col de Neronne. The favourites will need to be at their very best.

Christian Prudhomme: As required in the tradition of the “bouchons lyonnais” (typical Lyon restaurants), the menu will be dense and promises a battle between the breakaway specialists, the climbers and the sprinters. First on the Monts du Forez where the riders will have to go up to the Col du Béal, and then mainly on the urban course of close to 15 kilometres in Lyon including three climbs: the Côte de la Duchère, followed by the Montée de l’Observance and finally the Côte de la Croix-Rousse just five kilometres before reaching the finish line.

Christian Prudhomme: “At last” might say the relieved enthusiasts of what is also known as the “Bugey pyramid” who had been requiring a summit finish there for quite some time. And it’ll almost be an entire climb of the Grand Colombier that will be organised for this 15th stage with indeed three of the four access roads covered. The final climb of the mountain, the one where it won’t be possible to hide will start in Culoz. The battle promises to be intense on the eve of the second rest day!

Christian Prudhomme: La Chartreuse area could inspire the many breakaway experts if they feel ready enough to battle it out on the climb up the Col de Porte. The mountains of Vercors also offer all the ingredients of a tricky stage. A similar cocktail to the one offered in Villard-de-Lans in 1987 that had left a bad taste in the mouth of Jean-François Bernard.

🎙 "It will be a real spectacle. We don't often see stages as hard as these so early in the Tour." @alafpolak1 reflects on the #TDF2020 course.

Christian Prudhomme: Only a great champion will be able to win at the Col de la Loze! The stage profile invites the favourites of the Tour to be audacious. They don’t yet know the road that will take them on that day to the Col de la Madeleine and have no idea of what to expect once in the resort of Méribel. They’ll still have an extra 7 irregular kilometres to climb with several passages at over 20%.

Christian Prudhomme: The course of the day is made for the most enduring climbers. Indeed over 4,000m of climbing will be on the menu. In the following order, the peloton will head up to the Cormet de Roselend, then the Col des Saisies followed by Les Aravis and finally the Plateau des Glières, a key location of the French Resistance, before continuing towards La Roche-sur-Foron.

Christian Prudhomme: Two days before the end of the race, the title and podium contenders might have the freedom to start focusing on the challenge that awaits the following day. It’ll therefore be up to the sprinters having survived the Alps to seize this opportunity to shine. The finish is really made for strong men.

Christian Prudhomme: The end of Tour time-trials are the less predictable of the discipline. They’re even less when the course on the menu is an uphill climb like the one to La Planche-des-Belles-Filles, 5.9kms long at an average of 8.5%. If the gaps are small, the positions on the podium could dramatically change.

Christian Prudhomme: Emotions run high on the final stage of the Tour. Light hearted in the first part of the race when time has come to celebrate and congratulate one another with sometimes a sip of champagne. Then comes the pleasure of re-discovering every year the Île-de-France area and Paris of course. Finally there are the shivers, the flower bouquet on the Champs-Ẻlysées indeed remains one of the most coveted on the sprinting planet. Unless…

Do You Need a New Bike?

How to Cycle Through Autumn