Collecting post stamps, beer coasters or postcards might swallow years of your life but if you want to turn your hoarding tendencies into something more enjoyable and even more time-consuming, try collecting vintage bicycles. In this article, we’ll guide you through the jumble accumulated in the attics and cellars of your grandparents and show you how to separate the wheat from the chaff. These old bicycles matter.

Anything made in the period between the early 19th century and before World War II is worthy. Early bicycles were experiments manufactured in odd shapes and designs. Among collectors, the most praised items are primitive hobby horses, giant high wheel bicycles or the well-known penny-farthing bicycles of the 1880s and the so-called safety bicycles of the 1890s that were marketed as safer than their dangerously high-wheeled competitors. All these bicycles are extremely rare, making them a subject of interest for museums and serious collectors. The ask prices at online auctions are hardy under 2,000 EUR but the final bid price might exceed 100,000 EUR. For example, a very rare King 48” high wheel bicycle from 1889 has been sold for 184,000 US dollars at an auction in 2013.

Wide balloon tires and heavy frames are the most characteristic features of the so-called balloon-tire bicycles produced mostly between 1933 and 1965 by the Schwinn and other manufacturers. These bicycles were used in the early 70s by the pioneers of the evolving mountain biking scene in Marin County, California, who enhanced used balloon-tire cruisers with gears, motocross or BMX durable handlebars and created ‘klunkers’ – the forerunners of later MTBs. In the golden era of cruiser bikes, plenty of accessories were introduced like speedometers, suspension forks, stylish lights or luggage racks. These once-popular bikes stayed overlooked until the mid-1970s when the Popular Mechanics magazine published a series of articles that ignited a collectors’ mania. After that, the prices of cruiser bikes started to rise and today, they belong among the most coveted items of collectors’ interest.

Designed to resemble a chopper motorcycle with their ape hanger handlebars and a banana seat, the wheelie bikes became a symbol of the US youth in the 1960s. Notable models were Schwinn Sting-Ray and Raleigh Chopper. The prices of these bikes begun to rise as soon as the 60s kids grew up and started to earn money that might have been spent on the reminiscence of their childhood.

BMX racing became a phenomenon among children by the mid-1970s. A purpose-built track across California hosted many events that should have prepare youngsters for future motorcycle off-road racing. In the beginning, the racers used wheelie bikes that were stripped of some features and individually customised but soon some manufacturers began creating bicycles designed especially for the sport. Redline, Mongoose, Webco, AAA or Dyno early models belong to sought-after items.

Get inspired in the online BMX museum. 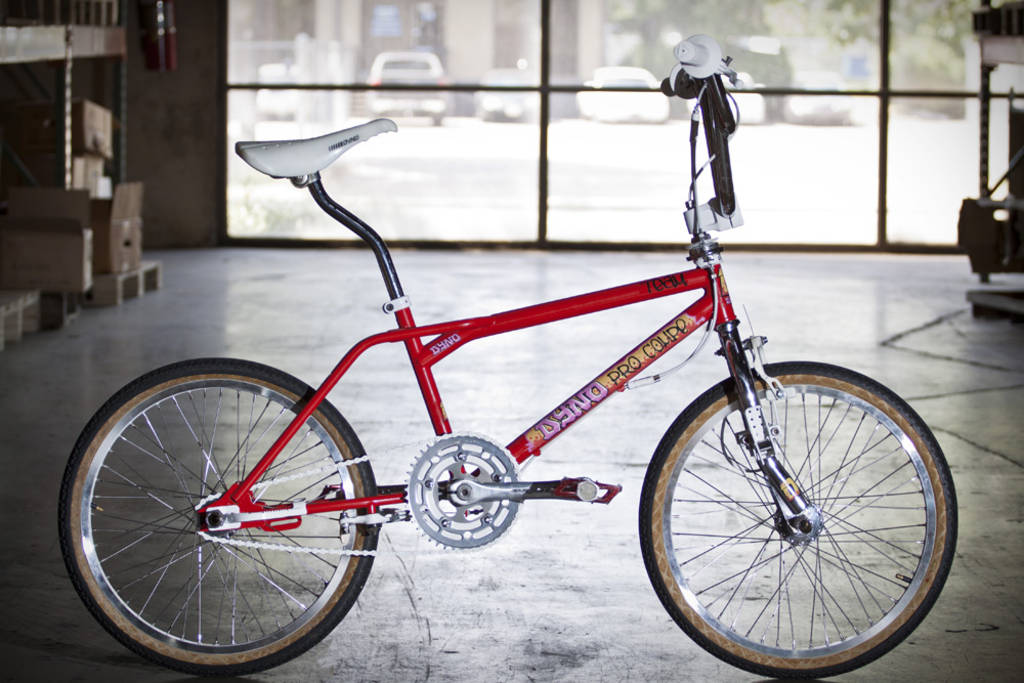 Today, you can have a wonderful ultra-lightweight bicycle made of carbon-fibre but many enthusiasts believe that only classical frames made of steel are the best. With the Eroica races spreading around the world where riders with only pre-1987 bikes are allowed, the vintage Italian bicycles are becoming extremely popular. The good news is that you can find beautiful and completely restored bicycles from Bianchi, Cinelli or Colnago starting at around 1,200 EUR.

Check out this one.

The Bicycle as Art