For most of us, the bicycle is a leisure pleasure, an adventure, and an enjoyable tool for keeping fit. Though not having one would certainly diminish the quality of our lives, we could probably live without one if we had to. In other words, the bicycle is probably not a game-changer for us. But for the grassroots NGO Bicycles for Humanity (B4H), it is. It regards the bicycle as an instrument of personal empowerment and a vital provider of mobility for those who have no or limited access to other means of getting around.

“Mothers can carry containers of water back to their village in a fraction of the time walking required,” B4H explains on its website. “Students get to school faster, saving precious daylight for studies. Parents transport more items to market to sell. Healthcare workers are 3 to 4 times more productive. In today’s technology-connected world, we believe that a bicycle and a smartphone are the game changers in all of the developing world.” 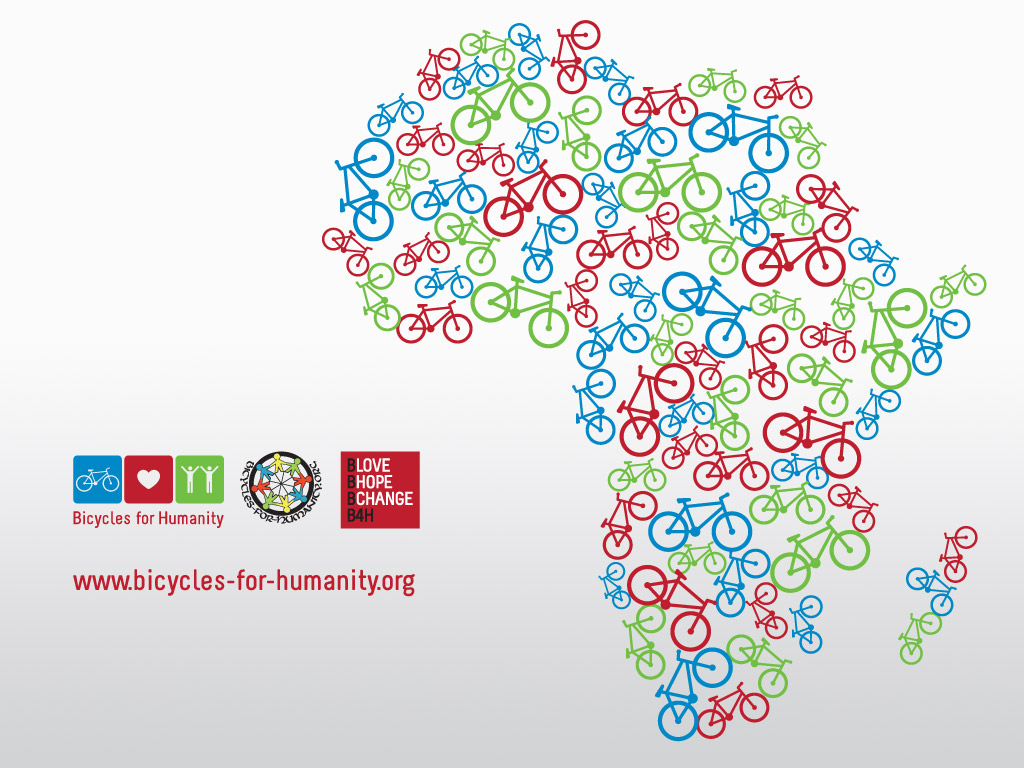 Since its founding by Pat and Brenda Montani in 2005, B4H has sent more than 160,000 bikes to Africa through some 50chapters around the world. Not bad for an organization that began with the modest plan of sending a single container of bikes to Namibia from communities in the Canadian province of British Columbia. B4H calls itself a “grassroots movement” because it has grown without marketing or awareness campaigns – just people in different parts of the world (bicycle lovers, no doubt) who heard about the program from friends or stumbled upon its website. “The  key to our success,” the organization says, “has been telling the story of the need for bicycles in the developing world and hopefully inspiring many to join a pure movement and make a direct and meaningful difference.”

Here is how it works: chapters collect and fund shipping the bikes to the closest African port and other groups fund the in-country costs of trucking and taxes. For many countries, such as Uganda, inland shipping costs and related taxes or duties to get the bikes in can be high.

How the bikes are collected and shipped to Africa is up to the individual chapter. B4H allows them to do so in the way they think makes sense and is most effective. “In short, you can be as creative as you like, spend as much time as you want and build programs, partnerships and fundraising initiatives that make sense to you,” B4H says. “Best of all, you can build relationships with many in the developing world, and by working closely with them to implement programs, you are helping transfer valuable business and entrepreneurial skills.”

B4H does have several specific programs. For example, the Bicycle Empowerment Center is a “bicycle shop-in-a-box” consisting of 450 to 500 bikes, tools, spare parts and training material on bicycle maintenance delivered to a community. The Development Kit consists of 10 to 15 high-quality bikes plus related clothing, parts, and equipment that can help a community create a mountain bike park or a business.

Among B4H’s many success stories is Karamoja.org. Karamoja is a sub-region in northeastern Uganda where living conditions declined considerably due to various factors such as environmental issues, conflict, illiteracy, poor health, and poor infrastructure. But a B4H’s shipment of 4,500 bicycles in 2010 provided the impetus for a “game change” in the impoverished regions.

At that time, there were no roads in the region, no electricity and few businesses operating, but since the bikes arrived and due to the creativity of B4H workers and local residents trying to change the area, a great deal has happened there. The 4,500 bicycles turned into successful Bicycle Empowerment Centres. That was followed by the rollout of the iEmpowerment, a partner program of B4H, which provides, among other things, inexpensive education and skill-development content, free online education and data collection applications for in-the-field healthcare data.

Then came the Kara-Tunga cultural tour and safari lodge; an IT service company, Karamoja IT Computer Services; and a new model of development called Cloud Empowerment. And it led to the Tour of Karamoja bicycle race, to attract riders and tourists to the area. This event was greatly aided by the late former Tour de France rider and broadcaster Paul Sherwen and his broadcast partner, Phil Liggett. Sherwen, who rode seven Tours, became an important part of B4H’s work in Uganda where he was living and eventually died and helped turn the Tour of Karamoja into Uganda’s biggest-ever bicycle race.

According to B4H, some 10 million bicycles are tossed into landfills every year. If you want to help turn potential trash in social gold, have a look at their website.